We hoped to have the foundation for the house poured on Friday, but the builder called off the pour early that morning. I was surprised it was still on as of Thursday evening with rains predicted for Friday, but with the rains not expected to hit until later in the day on Friday, I suspect it was OK (not sure how long concrete has to sit before it can take a downpour). Things looked far more uncertain Friday morning, and here's what the radar looked like at 5ish: 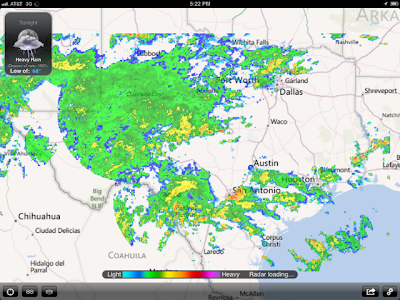 The pour is now scheduled for Tuesday, and the forecast is looking good: 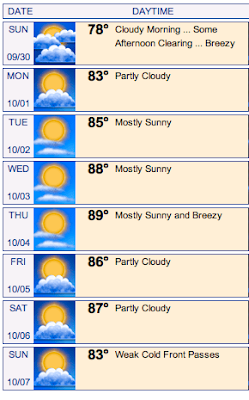 A good thing about making fixture and appliance choices early is that you've made your choices early. The bad thing is that after you've found the perfect choice, it may then go out of production. As it turns out, this happened to our hob (the word the Brit's use for cooktop). After plenty of searching, this hob by Whirlpool Europe is the one we totally fell in love with and, to a certain degree, designed the kitchen (at least the cabinets, range hood, and sink) around: 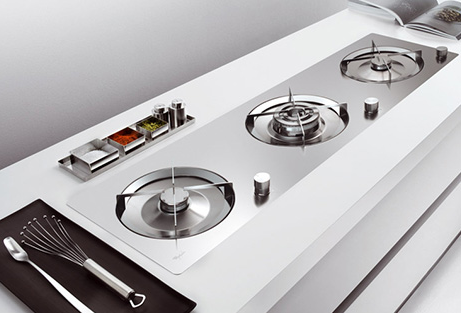 Since the local providers aren't able to provide it, we set out to order it a couple weeks ago and discovered that it had been discontinued. We then discovered that Whirlpool was selling their remaining few on Ebay UK, but then found out that they would not ship to the good ole U S of A. After more hunting and several emails back and forth, we found a place in Italy that (1) had some and (2) is willing to ship to us. As an added bonus, while amidst the process of ordering the thing (as in between putting it in the basket and confirming the purchase), the sucker went on closeout and dropped in price by 200 euros (from its previously lowered price; this confused the hell out of me because I was then not convinced what I had ordered is what I had ordered). Ultimately we got the thing for 40 percent off. Not bad (although I'll truly believe we've succeded when the thing arrives).

So a good thing about making choices early and having them discontinued is that you can (sometimes) get them on closeout!

The bride, worried about losing the hob, researched back up plans, shown below. That's a pretty hawt hob as well! From Australia...

The builder has pinged us to make final choices on plumbing and electrical fixtures; thus far, we've finalized the plumbing fixtures. As it turns out, the plumbing fixture supplier, Ferguson, can't get our preference for bathroom faucets for the master and guest bathrooms, so I set out to order them over the interwebs. Before doing so, I checked to see if there were any deals on our true loves, these (much more expensive) asymmetrical beauties by Graff: 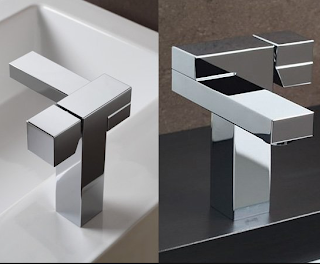 and I found a place that had 'em at 40 percent off with free shipping! We'll stick with the (still less expensive but similar) symmetrical Fresca Orba for the guest bath: 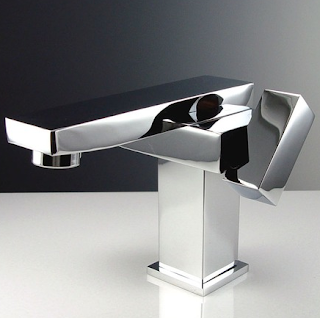 The builder is not too keen on us shopping for stuff over the internet, and for good reason (a single supplier that caters to builders means that if there are issues, there's a known single supplier to deal with familiar with builders' time issues). However, if the single supplier can't get our choice (or can't sufficiently entice us with an alternative [and we are picky-picky-picky]), we're gonna get it ourselves from the interwebs. Furthermore, if we find something online at a crazy low price (like that potfiller), we're gonna get it. Prices at the single supplier (Ferguson) are pretty darn good, so we're not worried about getting "ripped off" by the supplier.

Buying used items from the interwebs really gives builders the heebie-jeebies. We're not going there, but if you do, make sure that all the parts are included, and, if they're not, order replacements. Builders don't want to sit down to do their job and find out that parts are missing. In fact, checking for all the parts is good for new purchases as well.

The fact our cooktop is coming from Europe has some risk. Missing or broken parts are that much more difficult to get in a timely manner. However, it's a risk we're willing to take. If you do this, make sure you are extra understanding with the builder if things go wrong.

If you're hawt for advanced framing, we've learned that it's critical to go into design with an advanced framing (ahem) frame of mind. If you do advanced framing right, the house is built on a 24 inch grid with windows and whatnot placed to fit within these constraints.

Maybe the next house?