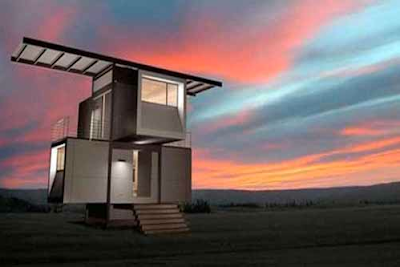 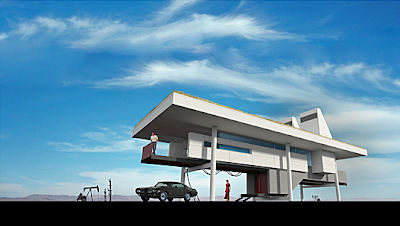 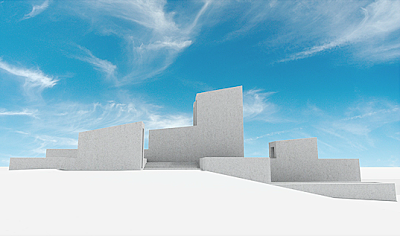 Saw a blurb in Austin Magazine about the local architect firm Specht Harpman and their prairieHouse, a concept house based on a converted gas station. And while Specht Harpman have designed structures that have actually gotten built, it's their concepts that are the coolest. Their zeroHouse, a fully self sustainable structure, has shown up all over the interwebs, and their windCatcher was designed in anticipation of the coming desertification due to global warming. Cool, or rather hot, stuff. More images at their site.
[images shamelessly lifted from Specht Harpman]
Posted by bubba of the bubbles at 8:06 PM No comments: 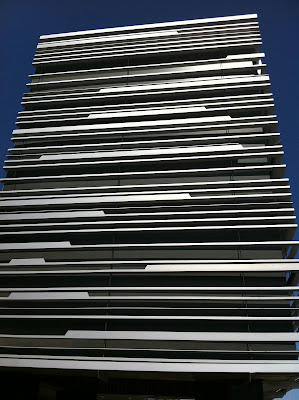 Neat use of aluminum straights and cut angle "irons".
Posted by bubba of the bubbles at 10:08 PM No comments:

general contractors (and pounds of flesh) 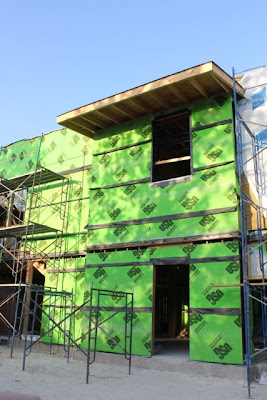 We’ve started “dating” builders and while we’ve gone to second base with a couple we haven’t hit a home run yet. “Dating” is probably an appropriate analogy (one we’ve previously used, I believe, with architects). There’s the first date where we’re getting to know each other and where one or both parties either realize that it’s worth a second date or that the party’s over before it started (Why won’t he return my phone calls?). There’s the gold diggers: highly attractive and world class but won’t touch you unless you drive a Ferrari (or are at least building something nice to house that Ferrari). There’s the Birkenstocked poets who promise the world but almost assuredly can’t deliver. And then there are the potential Mr. Rights who are whispering the right things in our ears but, through second dates, start revealing some potentially disturbing traits (stop reading now if you think this is starting to get a little too homoerotic…). If we could just Frankenstein the best bits of the various builders together, we’d have our man! But then we’d have quite a bloody mess and, most likely, a ruined chain saw. And without a chainsaw, how is the plumber going to rough in the plumbing?

A big sticking point is price. It costs more to build in the big city than the not-so-big city. The big city typically has (and in our case does have) more stringent requirements and codes than the not-so-big city. This adds to costs. Furthermore, building in the city generally requires true custom building: your house is going to be a one-off. Therefore, no suburban economies of scale (“We’re gonna build a hunnerd of these suckers!”) or mega-builder with his own crews and, thus, lower overhead. Then add to that green building, which is slightly different than standard building, and the costs creep even higher. While it runs 80 to 100 bucks a square foot to build in the burbs, it costs far more in the big city.

One builder we talked to, one I vaguely adore, pretty much said that he won’t touch a project that’s under $200 a square foot (I’ve noticed that the cool kids drop the “square” bit and just say “foot”. The scientist in me just can’t do it…). Gulp. And their fee, including site manager, for a house our size amounted to 30 percent. Double gulp. Yet another builder was at 22.5 percent; 25 percent if you added in charges not included in their fee (something to watch out for when comparing builder to builder).

According to what I found boogieboarding the interwebs, builder fees generally range from 10 to 25 percent with the higher end for luxury homes that are complicated and demand detail. Of course, those homes cost more as well. I reckon that the most talented and competent builders are the ones that rise to the top of the luxury market and make the big bucks, deservedly so. While our house is (hopefully) nice, it is by no means a luxury-level product. That makes it a little hard to pay luxury-level building percentages… The conventional wisdom I found describes 15 percent as reasonable and less than 10 percent as run-for-the-hills-because-that-builder-doesn’t-know-what-he’s-doing.

The other thing that’s a little disturbing about the business is that the incentives for the builder generally work against the homeowner. For example, one way to build a house is a fixed price contract. The builder bids on the project and delivers it at a fixed price. Therefore, the more cheaply the builder can build the home, the more money he makes. Not a good incentive for quality. And if things start going wrong early (i.e. overbudget), corners can really get cut toward the end of the project.

Another way homes get built is cost plus. Whatever it costs to do something, the builder then levees his percent fee on top. Therefore, there’s no incentive to find good deals on items and services because (1) it’s eating up his time (and time = money) and (2) finding a less expensive alternative cuts his pay. The builders we’ve spoken to thus far are cost plussers. One builder, recognizing the warped incentive of cost plus, fixed about half their fee at the beginning of the project and let the other half plus on the cost of the project. Not a bad idea, but the dis-incentive is still there.

Another way of getting a house built is through design-build where the same company that designs your house builds your house. The advantage here, presumably, is that the designers are working with the in-house builders to get an in-progress idea of cost and theoretically optimize the design and build process to save costs. The bad news is that you’re pretty much stuck with that builder. The good news is that your budget is built into the project from the get go; therefore, you greatly reduce the risk of a design do-over if the initial bids come in too high.

Right now, our screening bids are coming in too high. One bid is within reach, but only if we suck the soul (and the green) out of the house, and we’re not sure we want to do that. We have one more screening bid to come, so we’ll keep our fingers crossed. At least his cost plus is a more reasonable 18 percent…

{photo by mwah; of a pal's pal's house getting constructed over yonder on Shoal Creek] 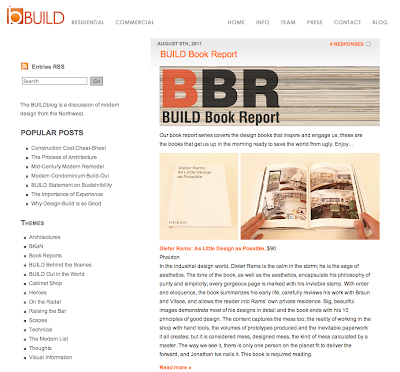 I love love love this blog. Carefully tendered by an architectural shop out of Seattle, the good folks at BUILD, firm believers in open source architecture, share their design thoughts on everything from parapets to showers to tile. They also opine quite a bit on running a small-shop architecture firm. And while the blog is a just a wee bit pretentious (they are, after all, architects…), it’s well thought out, well written, and often funny as hell. And they are not above poking fun at themselves and architects in general, as demonstrated by a post by Annie Choi (“Dear Architects, I am sick of your shit”) and “Dress the Architect”. Plus, they respectfully and politely respond to comments and gently but firmly address detractors. If you have a bidness and blog, this is the way to do it and build your rep. And, to top it all off, they design and build wonderful (high end…) houses!

Posted by bubba of the bubbles at 7:53 PM No comments:

Email ThisBlogThis!Share to TwitterShare to FacebookShare to Pinterest
Labels: blogs 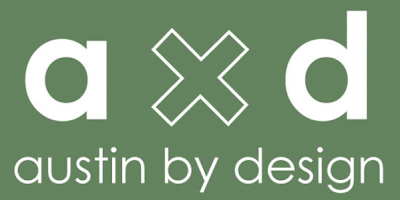 The Austin chapter of the American Institute of Architects is striving to turn its annual AIA home tour into a month-long event of design-directed activities called austin by design. In addition to the aforementioned tour (which is always awesome), there will be the Barkitecture design contest (cool dog houses), an interior design home tour, tours of architect offices, and various other tours, presentations, and green things. Lots to do in this October!

Posted by bubba of the bubbles at 8:01 PM No comments:

all your baseboard are belong to us

Whilst flirting with builders over the past week, the illustrious subject of baseboards came up. What type of baseboard would we be using? We hadn’t really discussed it with The Architect and left it, at the moment, with your basic baseboard. The gold standard for modern houses is something from Fry Reglet in which the drywall extends all the way to floor except for the last inch or so leaving a gap such that the drywall appears to float. It’s a crisp lean look that is rather stunning. It is also rather expensive (due to the material and expertise to achieve the look), hence the builder asking, in essence, “Would you like Fry’s with that?”

The good folks over at BUILD have a post concerning their preferred modern base details. They prefer four inches of wood or MDF on the bottom (better for taking toe and vacuum cleaner dings) and then a 5/8-inch gap achieved with a piece of Z-metal they say can be obtained from the drywall shop (you can also find all kinds of ‘reveals’ at Fry Reglet). From an energy efficiency perspective, having that gap at the floor or wherever on the inside of an outside wall may not be such a good thing for heat flow and/or air flow, although, if done right, I suppose air flow wouldn’t be too much of an issue.

I do like the look of the baseboard flush with the drywall, so I wonder if it’s possible to modify their approach by inserting a piece of aluminum angle “iron” in between the baseboard below and the drywall above such that the aluminum cups the drywall above. The aluminum could be left aluminum to halo the room. It might could also work with a simple plate of aluminum that extends out 1/8 or ¼ of an inch from between the baseboard and the drywall, but that would require careful taping to the aluminum. Perhaps that would look better with one by two instead of one by four… And perhaps something like this is only done in the “public rooms” (living room, dining room) instead of the whole house.

Indeed, all your base(board) are belong to us!