If you plan to build a custom home, you need to hire an architect. And hiring an architect is kind of like finding a spouse. There are furtive glances across the room, several dates, a mutual decision to get serious, a paperwork signing ceremony and, hopefully, resulting progeny (made of wood, steel, and glass). But how to find an architect?


One of our hobbies is going to open houses and home tours. These are a great way to get a gander at the goods of various architects and see what the cost and quality may be. On home tours, the architects will oftentimes be there, so you can interact with them in a cocktail party atmosphere (but don’t drink too much or else they will take advantage of you). In my experience, architects are among the nicest and neatest people you will meet: Smart, creative, intuitive, empathetic, and visionary. There are, of course, some kooks out there, so builder beware… Architects sometimes speak like new age gurus in loincloths when describing walls and windows. Others see you as a giant credit card there to achieve their architectural vision (which is fine if you are, indeed, a giant credit card there to achieve their architectural vision).

In our case, we were looking for an architect who could do modern but be considerate of the costs. And not do that spacey architect-talk bidness. When we reached a point where we thought it was financially hopeless to build an affordable modern house, we did one last open house in our neighborhood and found our man. The open house featured was a decent sized house (2,500 square-feet), was pleasantly modern, and had a reasonable price. If the kitchen, closets, and concrete floors had been exactly what we wanted, we may very well be in that house today. It was nearly perfect. Out front was a sign for The Architect. After a few calls, some Web trolling, and a couple dates, we had found our man. (Note that we would have been happy with a woman, but there just doesn’t seem to be many women in the business. We're also not sure The Architect would be amenable to a sex change [although he would make for a mighty fine dirty blonde...]).

There are other, perhaps more direct, ways of finding an architect. For example, checking out the rolls of the local AIA (American Institute of Architecture) chapter. But we strongly recommend checking out the goods—and making sure you like and can work with the person.

As it turned out, hitching up to an architect early in the process was a good idea. The first several lots we made offers on really required having The Architect take a look at them because of topography and potential building challenges (both of which add to cost…). The Architect was also able to check with the city on some potential issues as well as give guidance on value given the house we were building (a real issue in the center of town given the “small” size of house we wanted to build). Using The Architect during the lot vetting phase also allowed us to spend some quality time with him before later signing a contract for the home design.
Posted by bubba of the bubbles at 8:19 AM No comments:

Email ThisBlogThis!Share to TwitterShare to FacebookShare to Pinterest
Labels: architect

there's a lot to love! 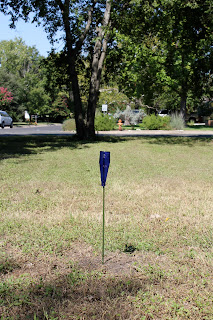 Whelp, we did it: We bought a lot! Suddenly this hypothetical of building a house is turning real, real fast. It certainly wasn't without its ups and downs and surprises but, in the end, it got done.
Our search was two years in the making after first finding a "dream lot" in the Bouldin Creek neighborhood. That lot was a bit Green Acres: city views out the front, a country creek in the back. It also had some building issues (challenging topography) and some less then desirable attributes (did I mention the railroad tracks one house over?). However, the owners were absolutely unwilling to budge on price, despite our financial stretching to within 90 percent of what they wanted. That lot is still unsold...

About a year later, after expanding our search, we found a wooded lot in northwest Austin. Again, backing on a creek but with far more challenging topography, a lot we called the "cliff lot". Into negotiations we went and came within a cat's whisker of having a signed contract when the neighbors used a small bulldozer to tear out trees and dam a small creek on the lot to landscape their backyard (all without city permits). The lot owner didn't appreciate our concerns with the potential liabilities, not to mention that he wasn’t at all upset about the transgression (suggesting he was somehow part of the whole affair), so we walked.

After pouring over the financials more closely, we realized that we were somewhat blessed to have those two deals fall through and started looking for lots for about a third less than what we had been budgeting for. This pushed our search out from the city core a little bit. We flirted with another greenbelt lot in northwest Austin, but balked because of city restrictions and neighborhood covenants.

That brings us to our current lot. It's different than any of the lots we'd considered before in that it is flat and doesn't back on greenbelt. However, it is a larger-than-usual city lot (1.5 times the "normal" size at a quarter acre). Located in Allandale, it is on the north side of downtown but "in the loop" (south of 183, east of MoPac, west of I-35, north of 290). It's also in the coolish mid-century modern part of Allandale. Most importantly, it appears we can build and, if we had to sell right away, not lose money. We can have a garden, and the neighborhood, because of its lack of topography, is “Isetta friendly”. Interestingly, the subdivision of Allandale that our lot is in is called “Green Acres”. So although we didn’t get our “Green Acres” lot in Bouldin, Green Acres is where we will be.

The seller was a little kooky. He wanted us to sign a nondisclosure statement on the selling price (we refused), and he added a little trickery into the contract which he revealed just before closing that nearly scuttled the deal (we walked out of the room with our cashier's check; lawyers were consulted). The agents, sensing a disintegrating deal, stepped up “to make things right” before the seller’s resolve was tested. Talk about a poker game…

The lot does offer one challenge: It's on the edge of the neighborhood and backs up to a car dealership. Unfortunately, the dealership keeps four air compressors out behind its shop right behind our lot. But we're confidant that can be dealt with in some way.

Because my job gets a little crazy from now until May of next year, we won't start building until then. That gives us plenty of time to work with the architect on designing the house and preparing our current abode for sale.

I stopped by the lot yesterday and christened it with its first blue bottle. The adventure has just begun...
Posted by bubba of the bubbles at 11:15 AM 4 comments: