to ERV or not to ERV, that is the question.

Modern homes (those built today) are much tighter than homes build even 10 years ago, and just about everyone (if not everyone) agrees that the tightness of modern home construction requires some level of forced ventilation to prevent indoor moisture problems as well as the dreaded stale air. But what kind of forced ventilation?

Central fan integrated supply systems are connected directly to the upstream side of an HVAC's air handler and generally have a controller (such as an AirCycler) that manages a motorized damper to open and close access to outdoor air and controls the fan on the HVAC to ensure proper ventilation. Unlike the exhaust-only system, which creates a slight negative pressure in the house, the central fan integrated system creates a slight positive pressure. You have control of the air source but not on where the air exits the house. If the fan on the HVAC is not energy efficient, you can pay a high energy cost for fresh air.

A heat-recovery ventilator (what the cool kids call an HRV) brings air from the outside and exhausts air from the inside at the same rate to maintain a pressure balance (although the use of bathroom and kitchen exhaust fans and dryers are still not balanced, but I digress). An HRV not only moves air in and out of the house to balance pressure, but also facilitates heat transfer between incoming and outgoing air (warm air going out warms the cool air going in during winter months; cool air going out cools the warm air coming in during summer months). An energy-recovery ventilator (what the cool kids call an ERV) also transfer moisture between incoming and outgoing air. According to another excellent article from Green Building Advisor, an ERV makes sense in a hot, humid climate (that be us!).

ERVs can be installed in several ways, but the two broad ways they are installed is (1) in the plenum of the central HVAC and (2) with its own ductwork, with the latter considered the Cadillac of ERV/HRV installation (see the Green Building Advisor). However, all that additional ductwork requires additional work and materials which requires additional moola.

The Green Building Advisor recommends a separate duct system, but others suggest connecting it to the upstream end of the central HVAC system. Bryant, who we plan to use for our HVAC system, recommends an upstream installation of their ERV: 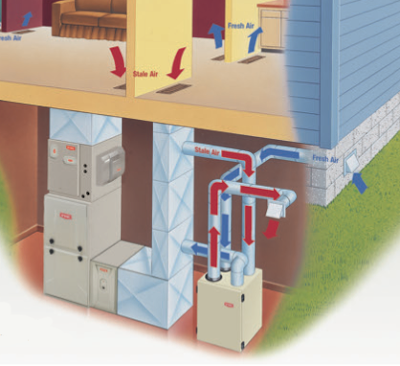 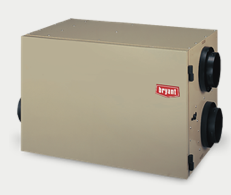 As the bride says, if you don't know exactly what to do, you might as well get it from the same manufacturer. In this case the unit will integrate with the overall system and the existing controller.

In the spring and fall (those week or twos that happen here in Texas)? We'll (forcibly) open a window.
Posted by bubba of the bubbles at 6:42 AM