The first thing I think about when I think about Nashville is country music, the Grand Ole Opry, and those price tags hanging off of Minnie Pearl’s hats. I don’t think about chicken (or at least I didn’t use to). However, not surprisingly, Nashville also has its food traditions, and Nashville-style hot chicken is one of them.

Prince’s Hot Chicken Shack is purported to have conjured the contemporary version of hot chicken after Thorton Prince’s girlfriend lathered a late night leg of fried yard fowl with cayenne sauce as revenge for him staying out late one night without her. He liked that angry bird so much that he opened a restaurant dedicated to it. Even today, hot chicken is considered a late night snack in Nashville after an evening of music and friends.

So what makes hot chicken hot chicken? Tradition holds that the chicken is marinated in buttermilk, breaded and fried, and then tumbled in a spicy paste. Sometimes folks apply the spicy paste before the breading as well as after the frying. Time-honored delivery is a pile of spice-glistened chicken atop a slice of white bread capped with pickle chips.

This brings us to Howard Marmulstein’s T22 Chicken Joint on Burnet Road. Marmulstein is the owner and executive chef of Salty Sow up on Manor (a worthy stop in its own right). Although he grew up in New York, he has a sincere appreciation (and deft touch) with down-home southern cuisine. Not one to rest on his Salty Sow laurels, Marmulstein opened a trailer called Tumble 22 back in May serving Nashville-style hot fried chicken. T22 Chicken Joint on Burnet brings the trailer’s concept (presently at Star Bar on West 6th Street) to a brick and mortar sit-down experience.

T22 serves food inspired by Nashville-style hot chicken, which means Marmulstein has brought a chef’s eye (and taste buds) to the dish. I’ve never had Nashville-style chicken before Tumble 22, but if it’s as good in its natural habitat as this, I’m all in. The chicken at T22 is perfectly fried, juicy, and delicious. The tumble comes in four heat levels (Wimpy, Hot, Dang Hot!, and Fire in the Hole!! [the menu shows the latter with a chicken emitting flames out of both ends; you've been warned!]). For the delicate flowers among us, there are non-spicy choices as well.

On my first visit, I was (pleasantly) surprised to find a sit-down, full-service restaurant (many trailer-to-brick transitions offer counter service). The vibe is shabby-sheik southern but open and comfortable. Wait staff are friendly and well trained. For my first taste, I went traditional with the 1/4 White (breast and wing, $7) with Dang Hot! Sauce, described by my waitress as sriracha-level heat. The batter was crunchy, the chicken juicy, and the sauce the perfect balance between pleasure and pain. For sides, I went with kale slaw (cole slaw with whisps of kale, $3) and potato salad ($3); both were pretty dang good. You can get some side dipping sauces for 50 cents apiece. The waitress recommended the Comeback Sauce as a fire retardant. I also ordered Sweet Chili Yogurt Sauce, a deliciously sadistic concoction that combines the cool breeze of yogurt with more pain.

Even the iced tea is chef’d up, offering complex notes like a fine wine (seriously the best iced tea I’ve ever had). On a second trip, I went with the O.G. Sandwich (hot breast topped with coleslaw, pickles, and mayo; $9) with sides of fries ($4) and mac-n-cheese ($4); again, delicious.

T22 offers a few salads ranging from a Caesar ($6) to a Potato Chip ($7) to a Hot Chicken Cobb ($9). The Potato Chip is ephermal: It was there the first time I went and not the second (and now appears again on the menu). When I asked what happened to the Potato Chip Salad on my second trip, the waiter explained “We learned that people that want to eat salads aren’t likely to eat a salad sprinkled with potato chips.” T22 also serves oysters and other sides and pies (be sure to save room and share the memorable Mile High Lemon Meringue). They also serve beer, a couple Texas wines, and mixed drinks to help wash on-site (or off-site) pain away. T22 also offers family-style to-go piles of chicken and chicken tenders.

The prices are amazingly reasonable given the quality of the food and the sit-down nature of the restaurant. The vibe is friendly and down-home with an excellently curated playlist of blues and old rock-n-roll.

You might wonder whether or not Allandale needs another chicken joint with what is becoming Fried Chicken Row along Burnet with Lucy’s Fried Chicken, Flyrite Chicken, Top Notch, and now Tumble 22. However, each joint scratches a different culinary itch. Top Notch pitches old-style fried chicken, Lucy’s chef’s up that old-style, Flyrite offers fast-casual and drive-through chicken sandwiches, and Tumble 22 (considerably) spices things up. All are delicious. All are great additions to the neighborhood. 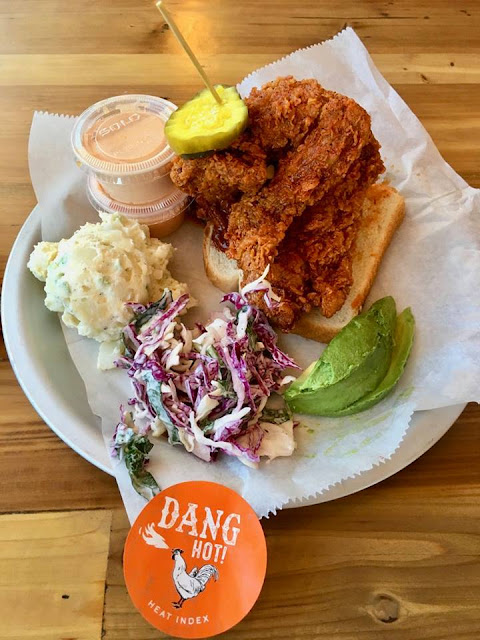 A plate of pain: the ¼ White at Dang Hot! With sides of tater salad, kale slaw, avocado, and two dipping sauces. 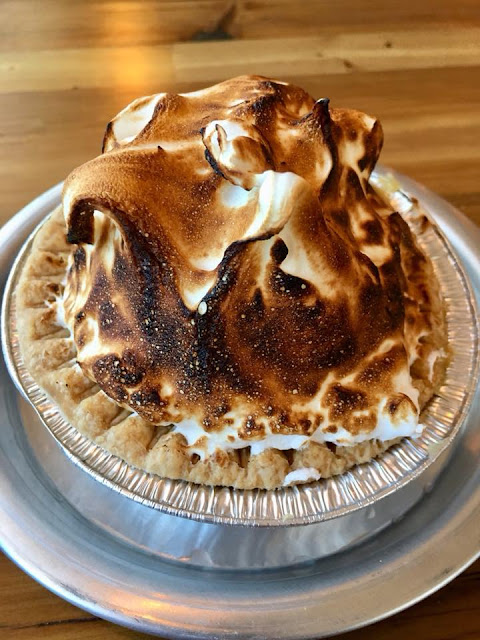 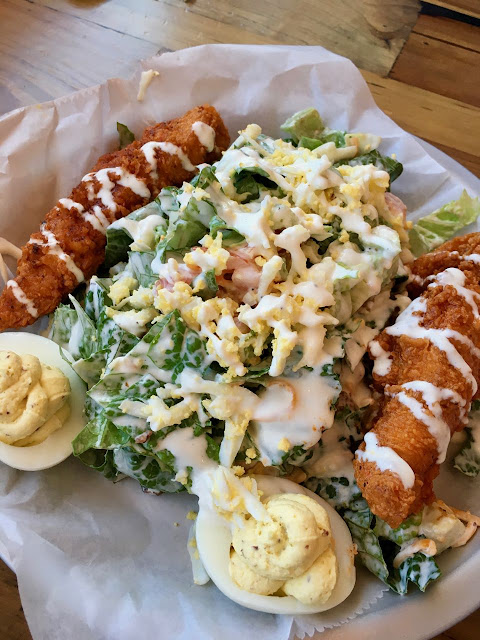 The Hot Chicken Cobb. It's a salad, so it's healthy, right? 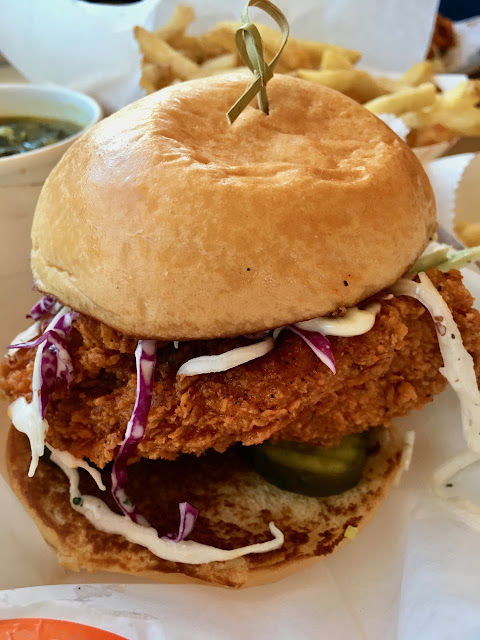 Chicken sammich.
Posted by bubba of the bubbles at 10:11 AM No comments: 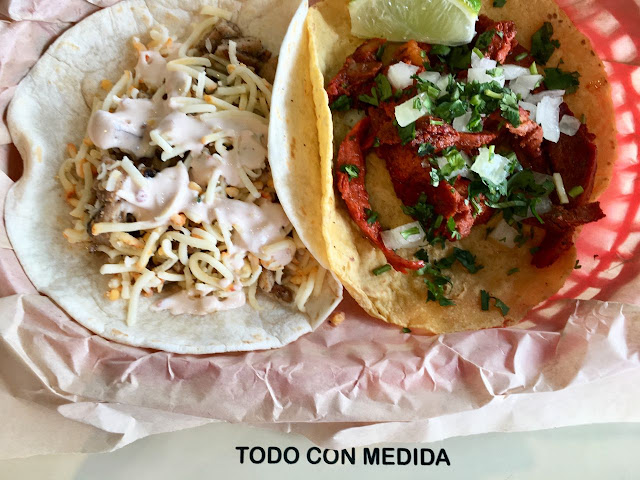 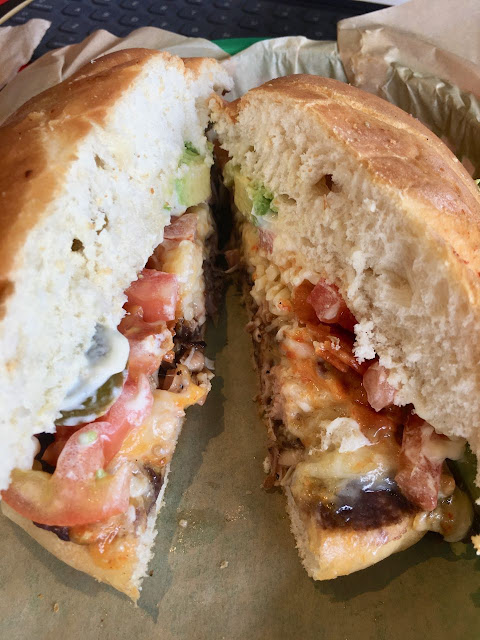 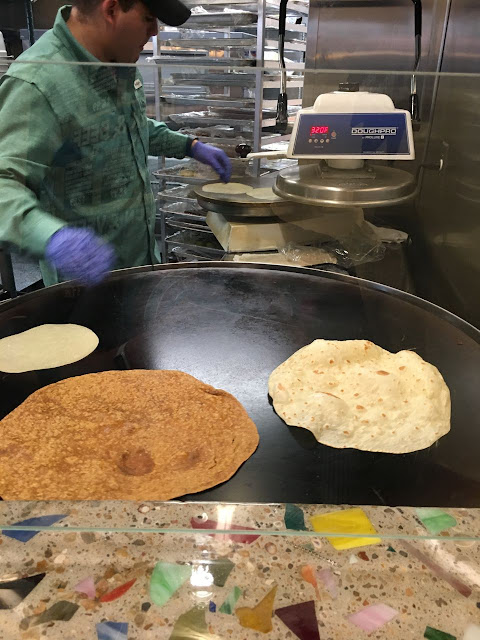 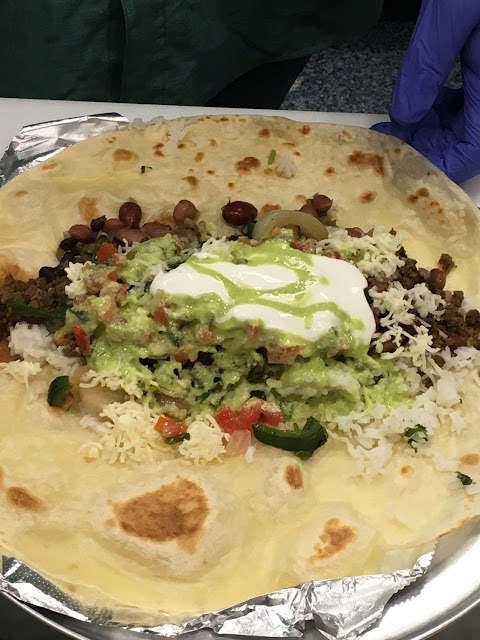 Before the wrap...
Posted by bubba of the bubbles at 10:04 AM No comments: