housewerk: the loan, the baseboards, the plans

Whelp, we decided to go with our current bank with a single-close to 15-year fixed. It locks in the current rate, yet still allows us to refi at our leisure when we're done. We had to think hard about 15 years v. 30 years. A 15-year note has a much higher monthly payment, but we think it would be better to pay off the house in 15 years rather than 30. Since we're starting to get up there in years, this would allow us to pay off the house before we retire (wethinks that's good as well).

Spent a hunk of the weekend putting together the paperwork. The final paperwork package I sent to the banker had 146 pages, and we're still missing probably 20 to 30 pages!

The builder sent us a note asking for details about the baseboard detail. In short, this is the look we're going for: 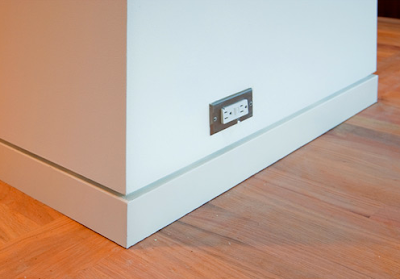 a wood baseboard flush (in the same plane) with the drywall separated by a gap (called a "reveal" by the cool kids). This is a detail that requires a bit more work in that z-metal (or z-molding) or j-metal (or j-molding) is used to "float" the drywall above the baseboard. Typically (and less expensively) baseboards are plopped on top of the drywall. The builder is nervous about running this up the stairwell (but it really needs to go up the stairwell to maintain the gestalt). He hasn't told us no yet (and he hasn't sent the contract yet either), so we'll see... We have a Plan B if this doesn't work out.

We had to get "final" plans (in quotes because there are still some details to work out...) to submit with the paperwork to the banker. I love gawking at the plans. It's like that game in the newspaper where you have two similar pictures and you have to identify what is different between the two. The site plan now shows the hardscape from the landscape design, and the architects moved one of the planters away from the house (had to happen because of the gutter). The floor plans are unchanged except for minorish details (for example, the washer and dryer are moved). The big change was in the electrical plan, which now shows the changes we requested and speaker locations. Looking good!

There are still details to be worked out, but I reckon that will all happen when we get started building. We're starting to keep a list of items we want to discuss before different building phases to make sure items are considered before those phases start. 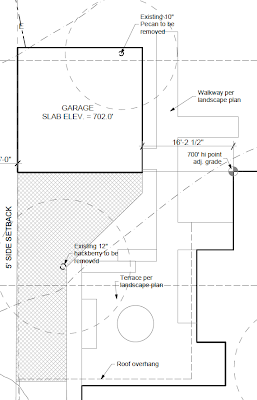 Posted by bubba of the bubbles at 6:45 AM