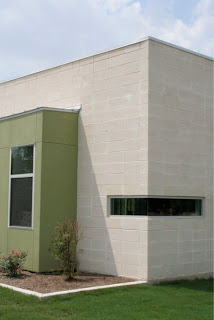 My bride and I spent yesterday, Saturday, at an all-day seminar (8:30 am to 4:30 pm) to learn about building a green home. We heard some surprising things. First, Austin was the first city to have a green building program. Starting in 1985, the program resulted in the Energy Star program now used by the feds, and the green rating used by the city served as the inspiration for LEED certification (Leadership in Energy and Environmental Design). Impressive. As might be expected from such an influential program, the day’s seminars were also quite impressive and informative—as well as entertaining and inspiring.

- Design for passive solar. Seems like a “duh” kinda deal, but most houses do not consider the sun in their design. Developers are more concerned about getting the house built, looking good, and sold rather than operating good. The city architect’s point was that how the house was designed with respect to the sun was the single most important “green” item to think about. Such houses use far less energy than houses dolloped onto lots with no solar consideration. I have to confess that I was fixated on active solar rather than passive before learning this. I’m happy to report that I am now solarly passive aggressive.

- Strawbale, adobe, and rammed earth aren’t good choices for Austin. These building techniques rely on large diurnal temperature swings to work their magic. Aside from earlier this week and the occasional blue norther, Austin doesn’t get those swings. Therefore, the thermal loading works against you in our nonswinging climate. Not that we were considering these building techniques, but they are definitely off the table now.

- In Austin, air conditioning in the big energy hog. Therefore, anything to lower cooling costs is paramount for lower energy consumption. There’s the aforementioned passive solar considerations (design for windows to be shaded in the summer but sunned in the winter), but there’s also the design of the central air system. AC contractors tend to oversize units (no one has ever been sued for oversizing a unit), but that increases electric usage and decreases dehumidifying. Also, architects don’t usually consider where the ductwork is going to go. The straighter the duct work, the more easily the air flows, the more efficient the system, the less tonnage you need, the less energy you use, the more money you save. Put the air handler and the ductwork inside the conditioned space of the house—You don’t have to worry about leaks (and cooling the attic) that way. The HVAC engineering guy gave one of the most entertaining and informative presentations of the day. He was awesome.

- The typical goal for an HVAC system is to have the ACH (air changes per hour) less than 0.5. This means that half the air in your house is replaced with air from outside your conditioned space every hour. Say what?!?!? On one hand, maybe this is a good thing: Nobody wants to breathe stale air. On the other hand, that’s a lot of hot air your house is pulling in and subsequently having to cool during the summer. If your house was perfectly sealed, an ACH of 0.5 means you have a hole 10 inches by 12 inches in it. Progressively sealed houses get down to 0.3. Hyper-sealed houses get down to 0.1. I reckon our current house is over 1.0…

- You need to run the vent in your bathroom for at least 30 minutes after you take a shower. It’s critical to get that moisture out of your house. It saves you in the long run.

- The vent over your stove is to remove heat, not smells or greasy air. Always have it on when your stovetop or oven is hot.

- Geothermal may not be such a good idea in Austin. Installers call it geothermal, but it’s actually a heat pump using the earth as a heat sink (in summer) or a heat source (in winter). Usually, these systems use boreholes drilled some 150 feet into the subsurface, one borehole per ton of cooling. What is happening is that the ground is warming up from the heat exchange during the summer months but, because our winters are so mild, the system is not bleeding off the heat enough during the winter months. Therefore, the ground is slowly heating up year after year decreasing the efficiency of the system. We were thinking about geothermal; we’re not thinking about it anymore.

- Heat pumps work well in Austin, but they fail to heat your house when temperatures fall below 37 degrees. The back up heating in these systems, electric strips, use a lot of power. On balance, a good idea, but pray for global warming.

- Electric generation by solar runs about six bucks a watt.

- IKEA cabinetry is free of formaldehyde.

- Austin is not a good place for personal wind generation.

- There are some crazy women that go to these things.

So there you have it. Highly recommended if you are interesting in attending and useful to anyone from around the country.

http://www.austinenergy.com/energy%20efficiency/Programs/Green%20Building/index.htm
Posted by bubba of the bubbles at 9:05 PM No comments:

If we ever build a house, it will harvest rainwater. We installed an 800 gallon tank behind our current house and love it. We use it to top off our cow trough pond and to water the garden and sometimes the grass. Truth be told, 800 gallons is not enough. We want more.
But how much more could we get with a new house? To help answer that question, the Texas Water Development Board has a helpful manual with ways to calculate and size a tank for your home.
The first thing to figure out is roof catchment. We're considering building a house in the two-story 2,500 square feet vicinity with a detached garage of about 400 square feet. Halving the 2,500 (to account for the two stories) and discounting possible "orphaned roofing", we have about 1,500 square feet of catchment to work with. Austin gets, on average, about 32 inches of rainfall a year. Now, there's nothing average about Austin, and there's sure nothing average about the rainfall here as well. We've had dry months (no rainfall) and gullywashers (15 inches in 30 days). The average monthly amounts that make up that average annual number range from 1.72 inches in July to 4.33 inches in May. We're fortunate to have two rainy seasons: May-June and then September-October. If we were planning to rely on rainwater as a sole source of water, I would use the median rainfall values, which are lower than the averages (and more reflective of central tendency, but we won't go there...). However, average is good enough for government work.
Based on that roof size and that rainfall, we should be able to capture, on average, 30,000 gallons a year (inches of rain divided by 12 [to convert inches to feet] multiplied by the catchment area in square feet multiplied by 7.5 [the approximate number of gallons per cubic foot]). Divided by 12 months, that equates to a storage estimate of about 2,500 gallons. This is probably on the low side because it would be ideal to have a larger nest egg of water going into the high demand summers. If we were relying on rainwater for all of our water needs, we would need to go through the detailed worksheet in the rainwater manual mentioned above (and have much more storage). But we're not. We're just looking for lawn and garden watering (and perhaps an occasional car wash).
It would be super cool to tap into rainwater for toilets and other uses such as showers and clothes washing, but some issues-that-cost-money arise. One is the need for a backflow preventer on the city-supplied water line. Water providers start getting sweaty-brow nervous when you use other sources of water in addition to theirs. Their primary concern is having water of unknown quality sucked into their system during a pressure loss. If that happens and your water has little wigglers in it, you could make your neighbors very sick or even kill them (now don't be getting any ideas...). There are ways of dealing with this potential siphoning, such as having an air break where the two sources of water potentially mix (having an air break means that there is always air between the city source and your source and there is never the potential of your water coming in direct contact with the outlet from the city source). But there's a lot of trust that has to occur between a rainwater collector and the water provider to rely solely on an airbreak. Hence the backflow preventor: No trust required. If you have to install a backflow preventor, you have to pay for it (upwards of $1,000) and pay for once-every-two-years testing by the city (upwards of $200 a test). Bringing the water indoors would also probably require some treatment such as filtering and a dash of UV to kill the little nasties. If you plan to drip irrigate, you may need to filter the water first as well to keep any sediments from clogging your drip emitters.
So how much would 2,500 gallons of storage run us? We're really partial to those gorgeous Texas Metal Cisterns metal cisterns: Shiny, metallic, and somewhat clean-lined modern. A 2,500 gallon tank runs $1,650. Still need piping to hook it up (and perhaps a sump pump?), but that's not too bad in the grand scheme of things. An additional 500 gallon tank for, say, the garage would cost another $645. Austin gives a $500 rebate for installing a city-approved rainwater harvesting system. And the State of Texas doesn't charge state sales tax on tanks and accoutremount purchased to install a system.
Rainwater harvesting in the city has to be more of a love affair than a financial-based decision. Water is cheap. Just to pay off the 2,500 gallon tank with saved city water will take over 622,000 gallons, enough water to meet our current lawn watering needs for more than 30 years (note that the economics of rainwater harvesting in the boonies if used as a sole source in lieu of a well are far more appealing). Nonetheless, it's a "right thing to do" sorta thing, it's fun ("Look! The tank is filling!!!"), and plants and ponds prefer rainwater.
So do we.
Posted by bubba of the bubbles at 5:48 PM 2 comments:

Email ThisBlogThis!Share to TwitterShare to FacebookShare to Pinterest
Labels: rainwater 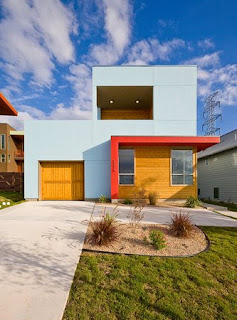 Cute little house up yonder at the Agave development east of Austin, one of our favorite places in town. Agave is a little too far out of town for us, and the houses, as designed, don't quite meet our needs (for a garage for small cars...).
Posted by bubba of the bubbles at 9:06 AM No comments: