Frank Lloyd Wright built a number of houses in Los Angeles (he moved to L.A. in 1923 for a few years...), so we streetgawked a few and toured the tourable one (the Barnsdall House aka Hollyhock).

One of our favorite Usonian houses is the Sturges House. Built in 1939 to jut from an awkward hillside lot, the house has an almost shocking and alien sculptural appearance from the street. As we drove up the street, we both gasped when we first saw the house cantilevered above us. Typically you don't see the underside of a house, but here it is, another side to consider and architect (and proof that often the most creative designs source from the most challenging of lots). Along with the severe angles of the underside, Wright expertly masses the top side, further feeding the alien analogy. Wright employed John Lautner, he of later Los Angeles cliff-hugging designs, to oversee the turbulent lawsuit-inducing construction of the project. 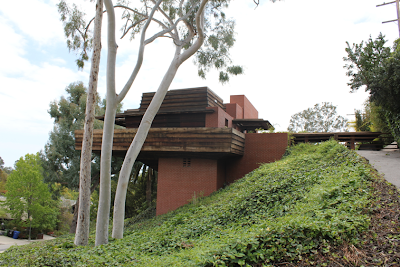 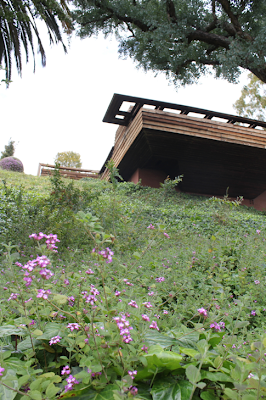 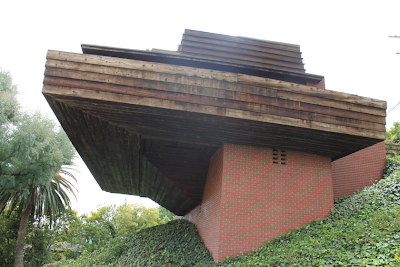 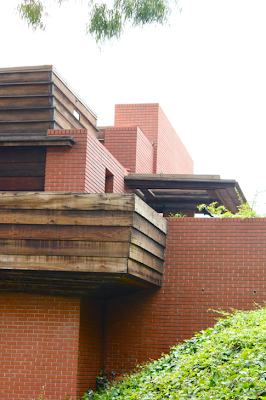 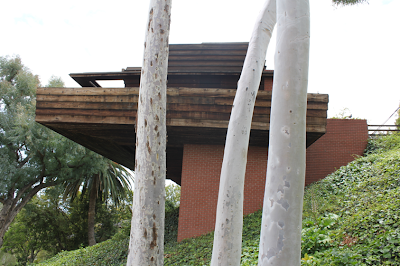 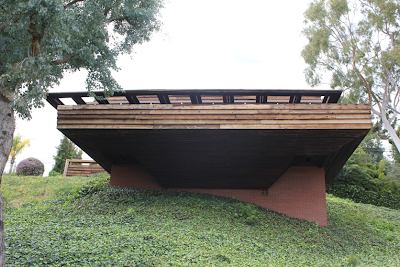 We met up with an old college buddy to tour the Hollyhock House, Wright's first Los Angeles project built between 1919 and 1923. I'm not a big fan of Wright's transitional Mayan-revival phase (he called it "California Romanza"), but I never pass up an opportunity to tour a Frank. A particularly spirited tour guide greatly increased the enjoyment factor. After the house was built, Frank told the client that the house was a "transition building", architectural slang for "not my best work." An spirited absentee client combined with a spirited absentee architect (who belatedly delegated tasks) combined with a new style created a challenging mix. 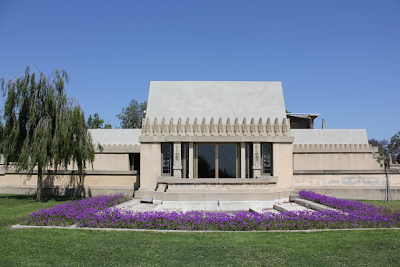 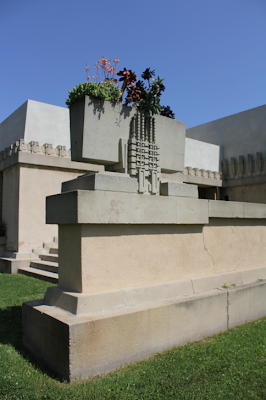 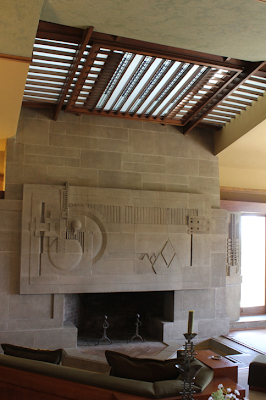 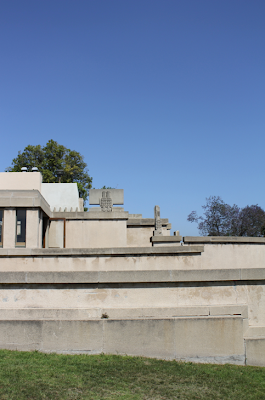 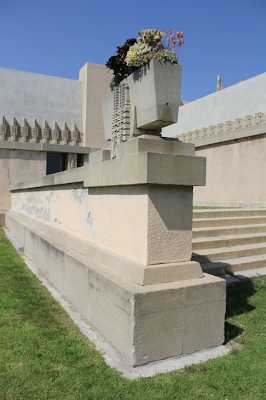 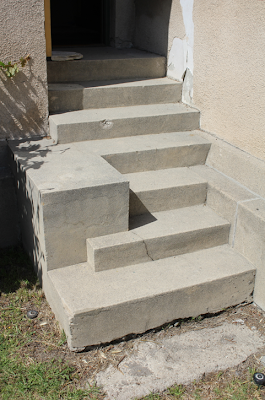 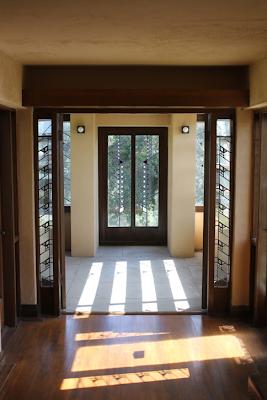 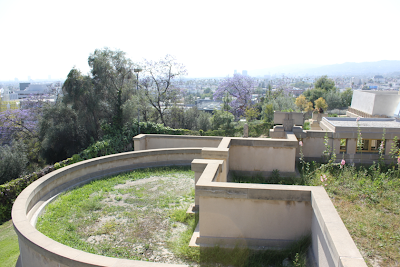 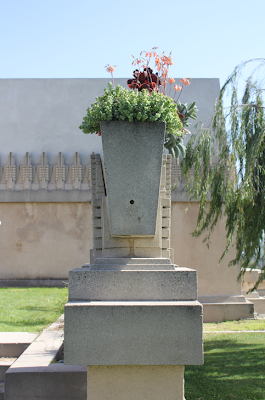 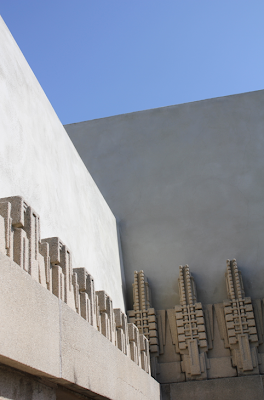 The Hollyhock House was what brought R.M. Schindler to Los Angeles to oversee the construction of the project while Wright was in Japan building the Imperial Hotel. Schindler designed many of the details (of example, indoor and outdoor lights) as well as many of the "out buildings" under the instructions of Wright to "design a Wright". The client, Aline Barnsdall, later hired Schindler to do some interior redecorating as well as some landscaping, something that allowed him to transition to his own practice. 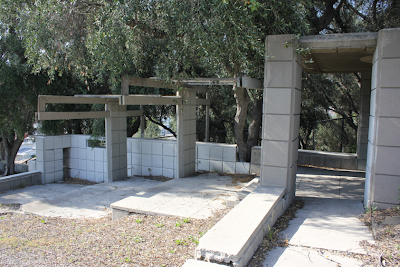 Whilst driving about town streetgawking at Schindlers, I accidentally came across two other Wrights (upon seeing one of his houses straddled on either side by a Schindler and Neutra, Wright remarked that he felt like Jesus, crucified between two thieves...).

The first Wright I stumbled across (besides viewing it from a distance from Hollyhock) was the Ennis House. Designed in 1923 and finished in 1925, it was one of his textile block houses in the Mayan-revival style he thought suited Southern California. The house, privately owned, is under continuing restoration. 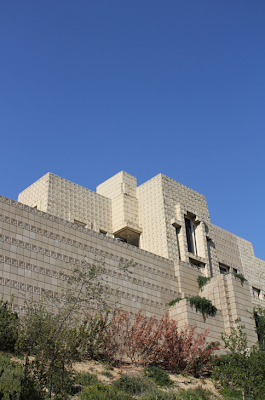 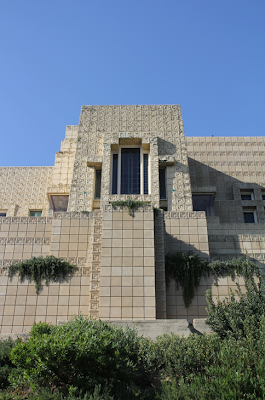 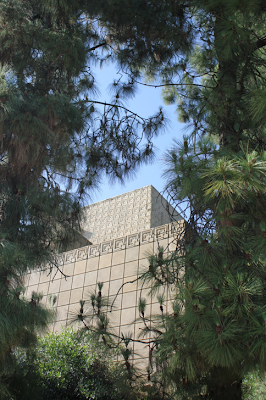 The second Wright I stumbled upon was another of the textile houses, the Freeman House, built in 1923. Much more modest than Hollyhock or Ennis, the Freeman house has a single story street presence that belies the three stories that spill down the hillslope. While walking up and down the street in search of the Schindler, a local chatted with me about the houses, recalling the wild parties she attended at the Freeman's! 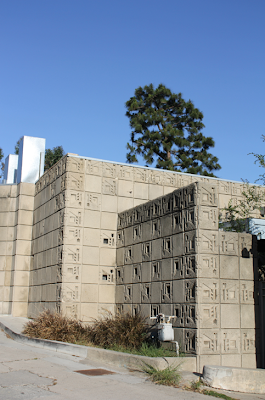 Posted by bubba of the bubbles at 5:54 PM