power to the people! (who don't want electrical outlets in their backsplashes...)

The architects have never had to deal with someone (that be us) who didn't want electrical outlets in their backsplashes. Rather than have them research options, we offered to look into it.

First off, not having outlets in the backsplash is a detail we like, but it's not a deal killer. If the budget (strongly) directs us toward plugging stuff into the backsplash like 99.47% of Americans, we will gladly comply. We're patriots, after all. We're all in this together.

On the other hand, those plugs really bother us aesthetically. And is it really wise to have electricity coming out of something called a "backsplash?" One item of concern is that if we don't go custom on the cabinets (which we won't), can we even consider un-plugged backsplashes?

After a wee bit of googling, we found these nifty little deals made by a company called Task:

Even better, it doesn't require putting the boxes into the bottom of the cabinets (a concern of the architects): 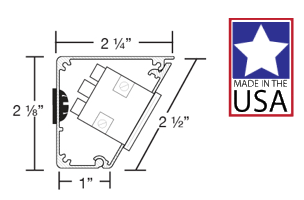 and it comes with some color choices that accommodate our white and metallic preferences: 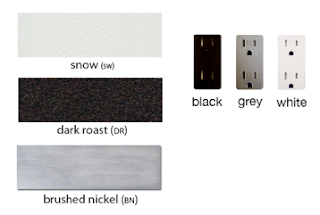 And they are made in the US of A. Nice!

No idea how much these babies cost. Hopefully not so much they cause us to spit our milk up (into a plugged backsplash...).

Another option that has a lower profile (but perhaps worse ergonomics?) is Plugmold by legrand:

It also appears to be less likely to induce milkspitting. As it says "perfect for 'invisible' outlets beneath a cabinet". And it's white. Perfect!

Looks as thick as a Big Mac, so I don't know... Couldn't find the specs. Also, note that it has to plug into something. I hope it ain't a plug in the backsplash. That would be a serious milkspitter...
Posted by bubba of the bubbles at 7:02 PM