this sucks (a wee story of central vacs)

HowStuffWorks also notes that central vacuum suck more because they are three to five times more powerful. That's cool! Central vacs are also locally quieter (the motor is elsewheres). Fine Homebuilding reports that a central vac can reduce allegory symptoms by 60 percent. Not bad... And they can reduce overall dust levels because of the external exhaust. Most canisters only have to be emptied out twice a year. Folks on the inter webs seem to recommend cyclonic systems (think Dyson).

On the negative side, they cost more than regular vacs. Also, running a central vac that exhausts to the outdoors can depressurize a home, especially if it's running the same time the dryer and/or range vent is running. 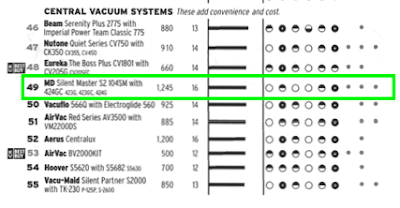 (Although it's hard to ignore, please ignore the green box.)

Essentially they're all about the same.

Posted by bubba of the bubbles at 9:05 PM