Here's the latest on the floor plans as well as the first (posted) elevations (as always, click on an image to see a larger, more savory version of it): 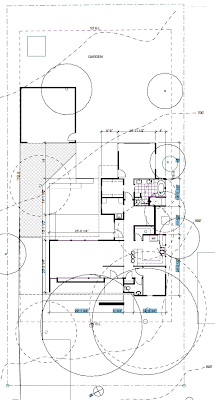 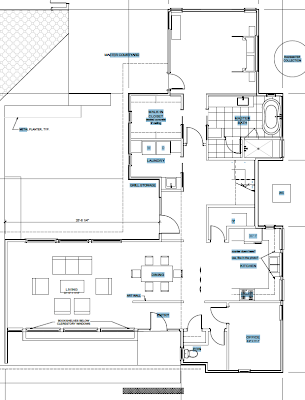 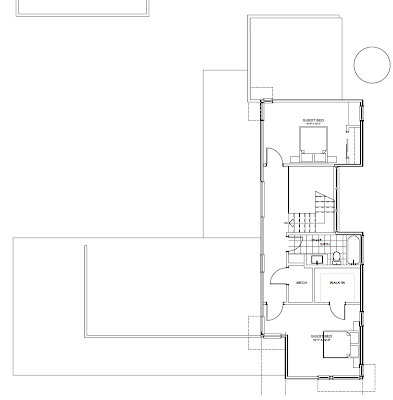 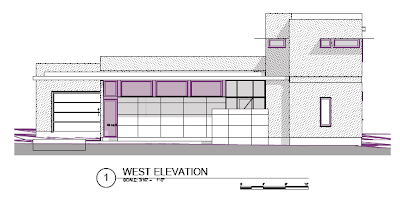 We haven't yet (over)analyzed these plans, so let's go ahead and do that now (bwah-ha-ha!!!).

First off: We're totally digging 'em. It's interesting (to me at least) how different these plans are from the ones Architect 1.0 developed for us. And while we liked the plans from Architect 1.0, we both agree we like these plans better.

The site plan (the first figure above) is essentially the same as before except that (1) there's now parking for two vehicles in the front of the property, (2) the footprint of the house is more refined as the design has developed, and (3) the garage is pushed a little further back to align with the back edge of the house.

The first floor also has some subtle changes from the previous plan. The living, dining, powder, and office are the same. The door to the coat closet now opens in the other direction (a suggestion). The kitchen now has bigger and more windows (a request). The pantry now opens into the kitchen (a suggestion [thank you Devon!]). The fridge has moved a wee bit (not sure why and not sure we like that, although it may be to accommodate a wall mounted oven and microwave [we're insisting, at this point, on a built-in range]).

The master bath has a larger window over the tub and another window to the side of the tub. The fenestration (fancy-schmancy architectural words for openings) in the master bedroom is refined, and there's now a door to the great outdoors.

The second floor is essentially the same except for the windows. There's now a wall-to-wall window spilling light over the stairs and stairwell (yay!) and a bigger window over the tub.

And for the first time we can now show you elevations! There are some subtle changes in the front facade from last week's realization such as the horizontal "indent" in the two-story mass that lines up with the roof line of the single-story mass and echoes the slab line and thickness and the line and height gap and thickness at the top of the front two-story mass. There's also the whisper thin overhangs now hovering over the second story windows.

Since I just finished (over)analyzing Le Corbusier's "Towards an Architecture", let me say that we think this house will be a good machine for living in. I had a pal who has had six houses (!) built for her over time ask to see the plans. After pondering them (an older version of the above) for a bit, she noted two changes that needed to be made: Door out the master (check) and the door from the pantry opening into kitchen (check). She said they were good plans. And they are. The kitchen serves as the core of the house with the public space clearly offset from the private space. The powder room is also central but away from everything so everyone doesn't have to listen to Aunt Mary's struggles with last night's El Arroyo especial (I've read that the door of a powder room should never open to directly reveal the occupant at first blush. Sometime doors open on their own or the occupant forgets to lock it. Our powder room gives a wee bit of squealing distance.)

The master bedroom has nothing above it, so the missus and I won't be woken up by toilets flushing or jumping around by potential upstairs occupants. We asked about having a sliding door in the master bath since the door in the older plan opened into one of the sink stations. The architects upped the anti and suggested the master closet and laundry also have sliders. Great idea, wethinks. With the master pooper enclosed in its own doored space, all those sliders will be open and out of our way for our day-to-day business. When there's a dinner party, home tour, or search warrant, we can close 'em. Perfect! Also, the master bathroom and closet are away from the master, so if one of us has to get up early, neither of us has to come back into the bedroom (except for the obligatory goodbye smooch, of course!).

The house is arranged such that the primary living space is all on the first floor. Although this wasn't a dealbreaker for us (it wasn't on the first house) we think this will be important as we get older and more gamey and grumpy (Get off the lawn you damn kids!!!). Plus, my bride hopes a guest room on the second floor will keep the mother-in-law away.

Speaking of the lawn, you can see from the site plan that we have plans for grass-crete: Some technology (whether grasscrete or not) that allows grass to grow on the driveway. You might also be wondering about the potentially awkwardish drive up there. In case you're joining the show late, we don't plan on parking our daily drivers in the garage. The garage will be for the two micro-cars we have. That's also the reason for the carport: a place for covered parking for one of the dailys.

The architects have given us their in-house assessment of cost, and the assessment looks good. However, our gut tells us the builder's number will be higher, so we're hitting pause before we go to construction drawings to give the builder a chance to review the plans and numbers. We also need to review and comment on the elevations (the floor plans are pretty solid right now) and think about landscape architecture. We asked the architects to give us their price assumptions on certain elements (such as the master tub, kitchen appliances, and lighting fixtures) so we can assess whether or not those assumptions fit in with our desires (if you recall, we set the architects down the path of designing a house to fit a certain budget giving us the option of bringing additional money to the table to upgrade). We also need to ponder the difficult question of color (more on that later...).

Please share any comments you might have. We've appreciated the ones we've gotten so far!
Posted by bubba of the bubbles at 4:16 PM