haiku for the book “Gropius” by Gilbert Lupfer and Paul Sigel 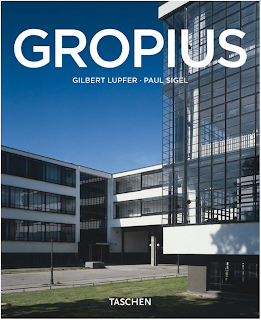 Gropius was one of the original Modern mavens alongside Mies van der Rohe, Le Corbusier, and Frank Lloyd Wright. Even though he couldn’t draw worth a hoot, he became an architect and worked for the proto-modernist, Peter Behren (many of the early modernists [Le Corbusier and Mies] passed through Behren’s shop).

Gropius was there when Behren designed his most famous structure, the AEG Turbine Factory, in 1910. The Factory used iron and glass to create an open, airy atmosphere for workers and assembly. Despite the structure being held up by iron beams, Behrens still felt the need to “ground” the building with thick and heavy but non-supporting pillars at the corners. Gropius thought this was not “authentic” and that the building had been “aesthetically manipulated”. 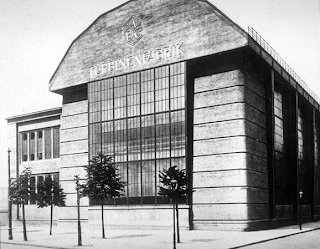 Gropius, along with Adolph Meyer, was able to forge his own path in 1911 with the design of buildings at the Fagus (shoe) Factory, a commission that would last until 1925. With the Fagus Factory, Gropius and Meyer were the first to use structure, reinforced concrete in this case, to liberate the outside walls from structural constraints, either real or imagined. They invented the curtain wall (a non-structural wall of windows) and the glass corner (an architectural jab-in-the-eye of Behren’s unnecessary beefy corners). In 1913, Gropius published an influential article titled “The Development of Industrial Buildings” which included photos of factories and grain elevators in the United States (something that later influenced Le Corbusier and Mendelsohn). 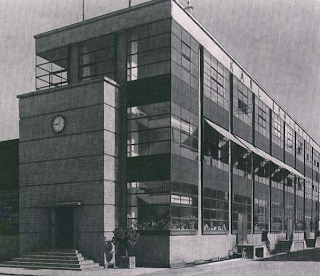 Gropius continued his experiments in structure-free shells with the design and construction of the Model Factory at the Werkbund Exhibition in Cologne in 1914. With this building he perfected the curtain wall and also showed the influence of Frank Lloyd Wright’s Wasmuth Portfolio, published in Germany in 1910. 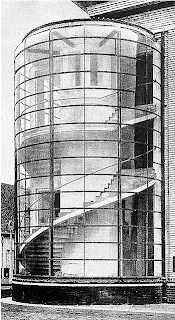 Between 1914 and 1918, World War I put a stop to most construction. While this was unfortunate, it was a time for many architects to pause and think about the big picture and how architecture fit into it. Based on those reflections, Gropius started the Bauhaus in 1919 with the manifesto that "The final product of all artistic endeavor is the building."

Unlike many of his contemporaries, Gropius wasn’t political; however, he made a fateful decision in 1920 to design a memorial to honor the workers who lost their lives in the Kapp Putsch, an attempt by right-wing conservatives (proto-Nazis) to overthrow the democratic government. Bauhaus's association with the monument came back to haunt him and Bauhaus later when the National Socialists came back into power in 1933 and destroyed the monument and shut down Bauhaus. 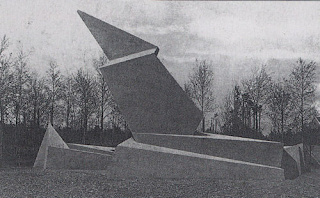 In 1922, the big architectural “contest” was the design for the Chicago Tribune tower. Chicago was world famous for architecture at that time because of the skyscrapers of Louis Sullivan and the Prairie School of Frank Lloyd Wright. Although a somewhat uninspired (but ultimately beautiful) gothic design was ultimately chosen, Gropius’s Modern design introduced him to a broader swath of the United States.

By 1924, Gropius had embraced “White Modernism” with the Auerbach House in Jena, Germany. He then set forth in 1925 to 1926 designing and building for the new Bauhaus in Dessau, Germany, including the houses for the masters (teachers), dormitories for the students, and teaching buildings for the school, all in white. 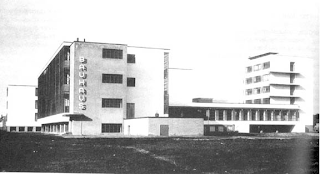 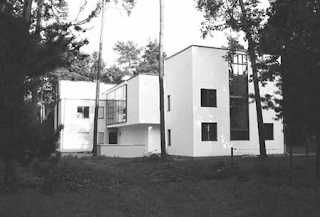 Master's house at the Bauhaus in Dessau. 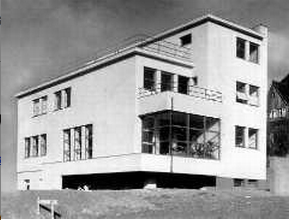 When the National Socialists took power in January 1933, they required architects to register with the government with the end goal of having architecture defined by the German state. Gropius tried to make the argument to authorities that Modernism was a good fit for Germany because it was guided by rationalism (that is, function over form). However, the Reich Chamber of Culture, under the boot heel of Joseph Goebbels, found its architectural home in Roman revivalism fused with Art Deco (sometimes called “Severe Deco”). With his architectural freedom taken, Gropius moved to England in 1934 with the goal, not realized, of setting up a new Bauhaus. In 1937, Gropius moved to the United States to be a professor of architecture at Harvard, becoming the chair the following year until his retirement in 1952.

Gropius never quite found his mojo again after leaving Germany, but the house he designed and built for himself in 1938 in Massachusetts showed how the International Style aptly conveyed to building techniques (wood frame) in the United States. 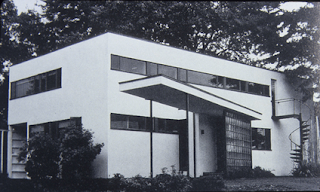 The Gropius crib in Massachusetts (1938).

This is another one of those fabulous architect books by Taschen I’m currently addicted to. A great introduction to a great architect with lots of great photos.

Side note: Gropius is also famous for designing an icon of Modern doorware, the lever handle:

Side-side note: Check out the submission (below) Adolf Loos had for the Chicago Tribune building. Dude was post-Modern before po-Mo was (un)cool!

Loos: Why you so wacky?

Posted by bubba of the bubbles at 1:25 PM