haiku for the book “Schindler” by James Steele 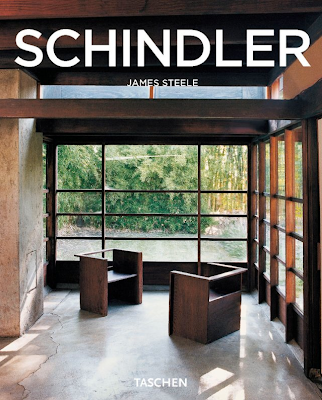 Wagner, Loos, then Wright
then everything on his own
crystalline structures... 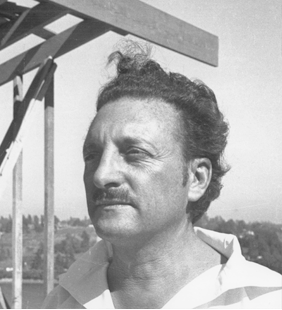 Rudolph Schindler may be my favorite Modern architect, and for several reasons. First and foremost, his houses are gorgeous. From the Lovell Beach House designed in 1922 to the Daugherty (!!!!) House in 1945, his crystalline geometry, long alluring eaves, and unadorned simplicity are sublime. Secondly, he’s something of an architectural underdog, stabbed in the back by “friends” and wrongfully ignored by his colleagues. Thirdly, he was arguably the most little m modern (as in today-modern) of the Modern architects, fusing Wright’s site considerations and Loos’s lack of detail with a hefty helping of client’s needs and budgets, all wrapped in affordable (American) modern construction techniques. 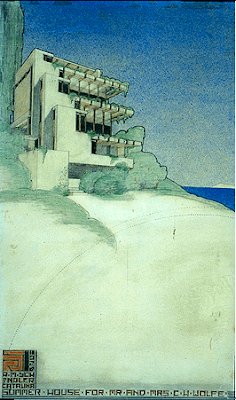 In many ways Schindler was Usonian before Usonian was Usonian. In fact, there are many elements of Schindler’s work (the L shaped house plan with plumbing in the elbow of the L; the horizontal woodwork set at unit lengths that dictated the construction of the house; used built-ins to expand space; minimized foundation area; focused on affordability) that appear in Wright’s Usonians.

Born in 1887 in Vienna, Austria, Schindler studied engineering and architecture at eh Vienna Academy of Fine Arts under Otto Wagner between 1910 and 1913 and then attended classes taught by Adolf Loos in 1913, where he met Richard Neutra. While in Vienna, he saw Frank Lloyd Wright’s Wasmuth Portfolio and, at the encouragement of Loos, moved to Chicago in 1914 to work for Ottenheimer, Stern, and Reichert (Ottenheimer had worked for Louis Sullivan). In 1915, Schindler took a six-week trip to California to see a couple international exhibitions. Along the way, he stopped in Taos, New Mexico, and was smitten, designing an adobe house. In Los Angeles, he was fascinated by the sparse, white work of Irving Gill, a former employee of Louis Sullivan in Chicago. In 1916, Schindler began writing Wright for a job. At first, Wright couldn’t hire him (Wright was struggling financially due to the moral backlash of leaving his wife and six kids behind in favor of a client’s wife), so Schindler worked as an engineer at a local firm, Ottenheimer, Stern, and Reichert.

It wasn’t until 1917 that Wright hired him to run his Chicago office while Wright worked on the Imperial Hotel in Toyko. In 1921, Wright asked Schindler to go to Los Angeles to work on the Barnsdall (Hollyhock) House. During his tenure with Wright, he designed several houses for Wright under Wright’s name. In 1921, enamored with the California climate, not able to return to a home ravaged by war, and concerned about wilting under Wright’s long shadow, Schindler started his own firm.

Inspired by outdoor living and camaraderie during a camping trip and the pueblos of New Mexico (and desire to ground his architecture in the vernacular), Schindler designed and built in 1921 and 1922 what is now considered one of the gems of Modern architecture and one of the very first modern homes, the Kings Road House (also called the Schindler/Chace House). The house consists of two L-shapes with a kitchen (the “campfire”) shared between the two units as well as an offshoot of guest quarters. The house is notable for it’s direct connection with the outdoors yet positioning the two units to maintain privacy (a “trick” that Schindler would employ time and again on a number of subsequently designed multi-unit apartments). With this house, Schindler is credited with inventing the sliding glass wall. 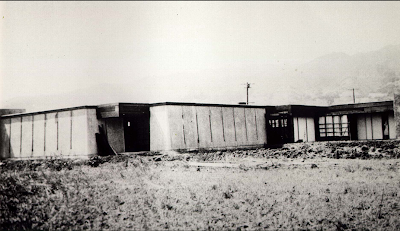 As a side note, Schindler and his wife separated in 1927. In 1936 she moved into half of the Kings Road House, communicating infrequently with her husband. When she later wanted to paint the outside of her half of the house, he sent her a letter: “Kings Road was built as a protest against the American habit of covering their life and their buildings with coats of finish material to fool the onlooker about their common base. Kings Road was conceived as a combination of honest materials, concrete--redwood--glass, which we to be left to show the inner structure and their natural color.” She waited until he died before painting the house.

During this period, Schindler designed and built the Lovell Beach House (considered another icon of Modern architecture) between 1922 and 1926. It’s with this house that he developed his blocky language informed by the neoplasticism of de Stijl. 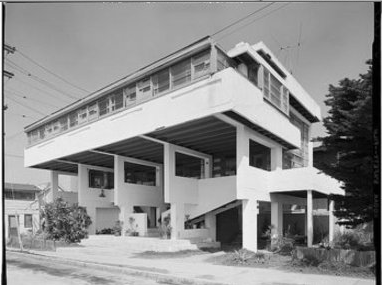 Schindler helped his old school buddy, Richard Neutra, get into Frank Lloyd Wright’s Taliesen school. However, Neutra left after a few months and moved into the Kings Road House in 1925 where, at the beckoning of Neutra, they joined forces as The Architectural Group for Industry and Commerce. Schindler was something of a beatnik, comfortable with his small commissions. However, Neutra was ambitious, forming the firm to pursue large projects and commissions. The partnership lasted two years before disagreements over credit (Schindler’s name was left off of an award-winning design touring Europe) severed the relationship. Neutra went on to design the Lovell Health House (which, to my eyes, borrows from the Schindler’s Beach House). 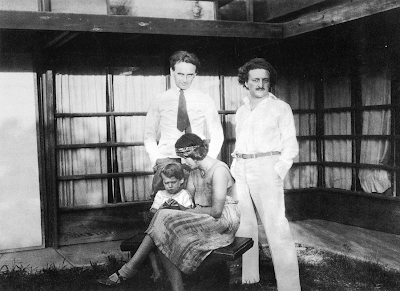 Neutra and Schindler (with Dion and Dione Neutra) in happier days...

Schindler was something of an architectural contortionist, forced by California’s topography (and fantastic scenary) to bend his structures to the land and view. He became known for producing as much house as a small lot and budget would support, something his clients appreciated. He optimized his designs to the dimensions of American building materials to eliminate waste. Unlike his European contemporaries, who set up strict design rules and restrictions, Schindler was non-dogmatic, willing to compromise aesthetics to accommodate interiors, views, and clients’ wishes (I reckon that was the engineer in him: aesthetics sacrificed to utility [although I find the majority of his houses quite engaging]). Schindler called his philosophy “Space Architecture”, architecture with an emphasis on the space inside rather than the walls outside.

Schindler’s architecture was heavily influenced by Wright’s site considerations and Loos’s focus on the interior and use of load bearing walls. His unwillingness to follow the dogma of the day and his association with Wright (as well as his penchant for lashing out at his critics) ostracized him from his contemporaries. For example, the 1932 show at the Museum of Modern Art in New York, curated by Philip Johnson, purposefully and stunningly excluded Schindler, stating that he “...belongs in the group of Wright followers.” Later, Johnson recognized his mistake: “[Schindler] was badly overlooked during his lifetime and I must confess my part in it. ... Now I believe Schindler was a much more important figure than I had casually assumed...the most important architect in California in his day.” Johnson claimed that he got most of his information about Schindler from Neutra: “Neutra was really evil, badmouthed everyone, especially Schindler...” (of course, Johnson’s not exactly Mother Theresa, so one has to wonder about his blaming Neutra…). Johnson, who helped coin the term “International Style”, pursued a true international style dogmatically (and ill-advisedly) independent of site considerations. Schindler was also inexplicitly excluded from the Case Study House program despite having influenced, either directly or indirectly, many of the houses built for the program.

Schindler designed over 400 projects, 150 of which were built during his career. He tended to build his projects, changing the design (such as window placement) if needed during the design. He also seems to have been a likable fellow (as long as you weren’t unfairly disparaging his work). Dione Neutra noted that Schindler “…laughs a lot and radiates cheerful optimism.” Frank Lloyd Wright said that “Rudy Schindler was too smooth a party ever to learn how to be serious, which is the reason why I liked him.”

Toward the end of his life, Schindler suffered from cancer. In 1953, when Schindler was in the hospital, Neutra, recovering from his second heart attack, was randomly assigned to Schindler’s room. Both were stunned at the happenstance, having not met or talked for nearly 20 years, but partly rekindled their friendship by reminiscing about Vienna and the past. Later that year, he passed away.

Although Schindler’s work had been published in some (primarily regional) architectural magazines, his first real major exposure came in Esther McCoy's “Five California Architects” published in 1960, a book that also elevated the reputation of Gill. McCoy worked in Schindler’s office as did Gregory Ain, Richard Lind, and Harwell Hamilton Harris (who later joined and deaned the School of Architecture at The University of Texas at Austin).

And finally there is this quote from the man himself:

Gotta love a dude who uses a kitten as an analogy! 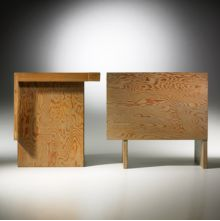