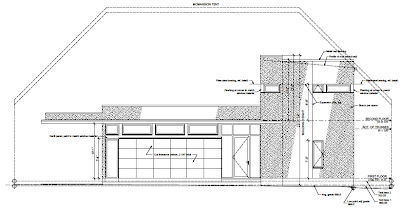 We got the hard bid back on Friday. As expected, it's higher than the soft bid we got back in late March. Not fatally higher (thank goodness!), just hmmmmm higher. I figured (hoped?) it would come in no more than 10 percent higher, and that, indeed is what it came in at. However, 10 percent of a lot of money is a lot of money (10 percent of it, in fact). Nonetheless, we engineered some budgetary head room in our budget to accommodate upgrades and uncertainty. And it looks like it was a good thing we did so! Most of the increase is due to choices we've made in materials, appliances, lights, and HVAC. The builder's estimate of the base house appears to be right on the money.

As a (probably over)general aside, let me note that nobody knows your house better than you do. This includes the architect and the builder. This is not a grumpy jab at the architect or builder; it's just a statement of (overgeneralized)fact. This may be different (and probably is) on higher end design-build projects where the architect is involved in every detail, but for more modest projects, the architects haven't detailed everything and they and the builders are juggling multiple projects in their heads and on their drawing boards. It all becomes a jumble: Your house is in there somewhere, but things can get foggy. Unless you've completely delegated the design of every detail of the house to the architect, you need to pay attention to the details and review things closely. You're part of the team ensuring success! Now back to our regularly scheduled program...

The analysis below goes into much more detail than a casual reader would want to suffer. I include the details to show the more-than-casual reader (potential building homeowner?) our thought process, right or wrong, and lingering questions and issues. The approach: A line-by-line review using the headers in the budget to organize questions and comments. Since I'm horribly forgetful (and since there is so much to review), I have to take notes to organize. It also makes it easier to share here!

Some questions we asked [and answers we got]:
So.... What are the next steps? I think the cabinet bid of 23 grand can be brought down to half that by using IKEA. The kitchen, bidded at 16 grand by Kitchen Craft, can be had at IKEA for about 5 grand (not including installation). The kitchen appliance bid came in seemingly high. The vent hood can be had for 1 grand less (to be fair the spec sheet listed the 900 cfm model instead of the 300 cfm model). For some reason, the sub has the stove/microwave/cooktop listed for $1,500 more than we can get them online (perhaps because of freight?). The plumbing fixtures come up for 2 grand more than we can get them online (installation? shipping?). Dealing with those four items would save us 17.5 grand (unless we're missing something...).  Changing the garage roof from that fancy-schmancy white stuff to standing seam metal should save a grand. However, our interior light choices are about a grand higher than what the builder has at the moment. And we don't see things on the bid like the central vacuum and doorbell. That stuff = $$$.

Ultimately, I feel we need to get the cost of everything on the table before we make any decisions. At that point we need to decide whether we cut or expand the budget to accommodate our desires.

The most excellent news is: We have a house we can afford! Whoop! Whoop! Now it's just ironing  out the details...
Posted by bubba of the bubbles at 5:48 PM