haiku for the book "R.M. Schindler" by Judith Sheine 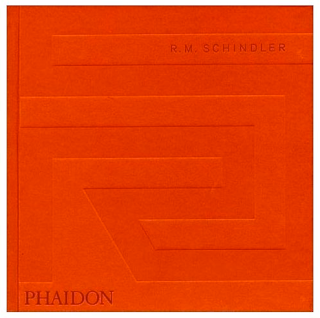 this R.M. Schindler
these interlocking volumes
was he forgotten?

Yet another biography of Schindler's work (not necessarily the man), and a good one at that. Published in 2001, it's one of the more recent books on Schindler and, therefore, takes advantage of the academic work and tomes that came before it. Nicely written, illustrated, and annotated, it's a worthy purchase. Like many architectural tomes, there are lots of savory photographs. Unlike many, there are also lots of words in its 304 pages.

If there's a theme to this book, it's in justifying Schindler's place in architectural history among the modern masters. Sheine clearly believes Schindler belongs, quietly arguing from several angles why. The "rules" of being a great architect include having guiding principles, consistently adhering to those guiding principles, and influencing architecture. Although it's clear that Schindler had guiding principles (his manifesto written in 1912; several articles published early in his career) it's been less clear to historians that he meets the "requirements" of the latter two rules. Sheine attempts (successfully, methinks) to address these two perceived deficiencies.

Historians and critics have poopoo'd Schindler's work because it looks so different from his contemporaries and looks so different over time. Early in the Modern movement, fed largely by the 1932 Museum of Modern Art show and its coining of the term "International Style", there was great pressure to adhere to Le Corbusieresque guiding principles over all others. Schindler, although sharing the same roots as the International Style, rebelled against its more doctrinaire aspects as almost all of architecture would decades later. Schindler had, in part, been "Americanized" by Frank Lloyd Wright by considering site in his work, something the International Stylists shunned. Furthermore, Schindler focused on interior space rather than outside aesthetics (although given the outer beauty of his work, it's clear he spent some time worrying about outside appearance as well). Not surprisingly, the architectural press focused on exteriors. Ultimately the only way to "see" an interior is to experience it, something you can't do in two-dimensional media. Schindler's almost pure humanist focus and distance from the eastern press put him at a great disadvantage of getting widely recognized when he was alive. 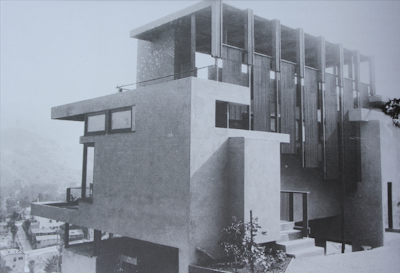 Because the tastemakers judged his work by exterior photographs, they missed the consistency in his work. Although exterior materials, building techniques, and appearance changed over his career, his adherence to space architecture from his 1912 manifesto remained consistent and true. For example, with the Buck House (1934), Schindler would not publish the interior because he felt the owner had influenced its design against the principles of space architecture. Sheine steps through Schindler's work piece by piece to illustrate the consistency and perfecting of this space architecture during his career.

Schindler's influence on architecture is much harder to pin down and is open to debate. Ultimately his innovations were quietly adopted and then promoted by others as their own. Sheine points out that many of Schindler's works were published, although mostly by the regional press. Nonetheless, his work was published internationally (in Neutra's books and European magazines) as well as nationally (for example, the Architectural Record). His Kings Road house was a cultural center for Los Angeles and influenced those that saw (and experienced) it, including many architects (including Frank Lloyd Wright). Arguably, the Kings Road House was the first constructed modern home (no ornamentation, open and flexible space, intimate linkage between indoor and outdoor space, flat roof, roof-top living) but, because it wasn't International White, it was essentially ignored by the national and international press. Schindler's previous association with Wright and adoption of some of Wright's views, namely site consideration and natural materials, as well as Wright's unfettered hostility against European modernism also hindered his broader acceptance by the tastemakers of the time.

Nonetheless, the Kings Road House quietly influenced modern architecture in California, key elements of which became hallmarks of international modernism still seen today: Lack of ornamentation, walls of windows, huge doors that completely opened space to the outside,  direct carrying of the inside to the outside, completely open living spaces, and affordable construction techniques. Sheine (as well as others) speculate that Mies van der Rohe saw Schindler's pinwheel design for Kings Road (the opportunity was there and correspondence suggests this) which later influenced the pinwheel design for his iconic Brick Country House. The Kings Road House and Schindler's later designs also heavily influenced Frank Lloyd Wright's Usonian houses, the basic design of which is remarkably similar to individual units of the Kings Road House as well as other Schindler houses of the time (see the Buck House, for example). Schindler's Lovell Beach House clearly influenced the aesthetics of Neutra's Lovell Health House, both of which influenced Wright's Falling Water.

If you don't like to read or don't give a rat's ass about history, the photographs in this book are phenomenal. There are many gasp-at-how-gorgeous historical photos I hadn't seen before as well as a number of recent color photographs made by Grant Mudford. Ironically, Schindler rarely designed white houses, but the black-and-white photography available at the time made many of his houses appear white, which helped get them published since they appeared to adhere to the International Style. The Walker House (1935-1936) is particularly amazing: It's light blue! 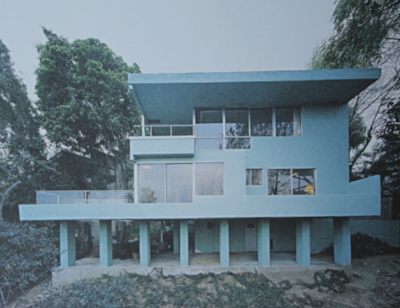