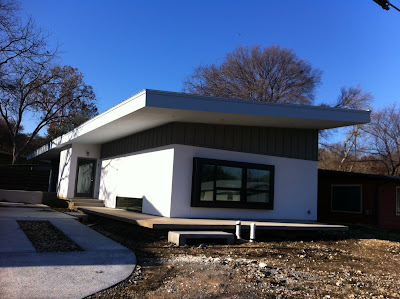 Spent the Wednesday before New Years visiting the last two architects on our list and gawking at their associated projects. In all, we’ve visited with five “firms” totaling six architects (“firms” are in quotes because two are one-man shops). Why so many? Because we were intent on having three viable firms to choose from. Two of the early firms we looked at were out of our range (their target projects had price-per-square-foots too high for us) leaving us the remaining three, solid contenders all. As I’ve said before, architects tend to be lovely people to chat with (I haven’t met one yet that wasn’t), and these six indeed were.

We stopped in at Architect 2d’s office to chat about our project and get more of a feel of the dude. I had picked through his web site and blog and spoken to him several times on the phone. For me, at least, his web site (which includes construction costs of his projects!) and his blog (which clearly laid out his philosophy on green and costs) prompted us to call him. Based on our visit, everything seemed as advertised. He steered us to two of his projects under construction, one at the 200 to 250 per foot range and another at 100 per foot(!). Both were quite nice. The builder for the 100-per-foot house let me wander through the project, and it was surprisingly nice at that price point. The architect noted that it was a modern style home but built using standard building practices. Nonetheless, the place had a garage with doors on front and back walls (a nice touch), a garage apartment, foam insulation (in the wall and included in the cladding), a roof-top deck with hot tub, and a master with a separate tub and shower. Some of the details were lacking (you can tell how good a tiler is by how clean the built-in shower shelves are…), but all-in-all the project was real nice.

I met Architect 2e at the lot (he’s officeless, but it was a nice touch to meet, greet, and squeak on the dirt). I went up to greet Architect 2e when he pulled up, and he had a pooch in his car, a creamy lab wearing a burnt orange sweatshirt. The pooch wouldn’t come out right away, so the architect left his door open. After wandering over the lot a bit, he went back to the car to finally coax the pooch out. We then decided to check out a couple of his projects under construction. I offered to drive. After we got inside my car, I said “I don’t mind if your pooch comes with us.” thinking it odd that he would leave his dog wandering around the neighborhood (with a burnt orange sweatshirt on, no less. What if he ran into a gang of pooches wearing maroon sweatshirts?). The architect replied “I thought he was your dog!” Turns out that as soon as Architect 2e stepped out of his car, the pooch ran over and jumped in!

Anyway, we had a lovely afternoon checking out two of Architect 2e’s projects under construction, one in south Austin and one out by Lake Travis (Good Gawd is the lake low!). It was the first time I had actually been on a construction site with an architect, and it was good solid fun. He pointed out why things were the way they were and how certain design choices can save money and add coolness. It was also kinda fun seeing him react to stuff that had been done wrong such as placement of HVAC equipment, odd holes cut into exterior walls, and some metalwork. No screaming, just mellow and reserved sighs of disappointment. “Whelp, gonna have to work around that…”

Architect 2e was pleasantly unique in that he was very focused on budgeting the project to fit potential resale value as it related to underwriting to get a construction loan (his cue might have been the hail-damaged Honda I use to haul my butt around town). It was a timely discussion as I’ve been getting angsty lately about this very topic (more on this later…). After spending more than four hours with Architect 2e we returned to the lot. The dog was gone, but the Green House lady drove by and waved (howdy!).

So after pleasant visits with all these architects, we learned:

- Design-build doesn’t make sense with a “low-end” house. Where details have to be right and the construction is complicated, design-build (i.e. the architect is closely associated with the project) makes more sense.

- Critical root zone (CRZ) also applies to trees on neighboring property, at least according to one architect (and I believe him because the one house he showed me had to be pushed to one side to get away from the root zone of the neighbor’s beautifully towering oak). This appears to impact our lot as the neighbors on both sides have big trees relatively close to our property line. Something to consider when looking for lots in a town that protects its trees…

- It’s hard to build around a tree without killing it.

- Those fancy-schmancy houses on the AIA home tours average about 350 bucks a square foot.

- The City of Austin doesn’t give you an impervious cover credit for pervious concrete.

- Underwriters tend to only look at the cold hard facts of resale value, not how nice your house is.

- Geotech can miss bad stuff in the subsurface.

- Pouring slabs in the heat of July can lead to bad results.

- You can build a pretty nice place at 100 a foot with the right builder.

So who did we choose? Stay tuned till next week!

Email ThisBlogThis!Share to TwitterShare to FacebookShare to Pinterest
Labels: architect