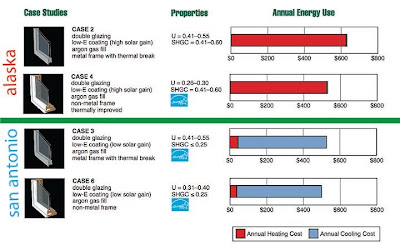 Been thinking about and struggling to understand energy efficiency and windows, which ties into broader subjects related to insulation, energy efficiency, and climate (more on that later…). In short, as far as I can tell, insulation, window characteristics, and wall (and roof) design depends on where you are at climatically. At first blush, this seems obvious, but it becomes less so when you wade into the details. For example, one would think that whatever is good for keeping heat inside in a cold climate would work just as well for keeping heat out. But that ain’t so. As near as I can tell, it all boils down to the (apparent) fact that it is easier to control heat than it is to control cool. But I’m still thinking about that…

One thing that has made it difficult to achieve an apples-to-apples comparison between different window designs is the lack of comprehensive data. The passivhaus subculture and the window manufacturers that cater to that subculture know how to do it. To do it right, you need to know the properties of the glass as well as the properties of the frame. Pretty basic stuff. However, most window manufacturers don’t report this data. Instead, they report numbers for a complete window of a seemingly random size. I say seemingly random because some manufacturers, if you read the fine print, test a ridiculously oversized window, presumably to minimize the less-than-desirable thermal properties of the frame. One manufacturer appeared to size its test windows to achieve a certain U-value. No apples to apples there even among windows of the same manufacturer (although it creates the mathematical possibility of teasing out an estimate of frame properties…). Some manufacturers only report the numbers for the glass, which is unfortunate and horribly misleading because the frame is often the thermal weak point.

So what’s a tossing-through-the-night-because-I’m-worried-about-them-darn-windows dude or dudette to do? Ultimately, I climbed the mountain to visit the Efficient Windows Collaborative. These fine folks show comparisons of energy costs among windows of different designs in different climatic settings across North America. What I get from poking around this site is that in Austin’s warm climate, having a low solar heat gain coefficient (SHGC; a measure of how much solar radiation comes through the window to warm your house) is the most important factor. In a cool climate, you want a higher SHGC because you want the sun to warm your house. In a warm climate, you want a low SHGC because the solar radiation is your thermal enemy. The U-value is a measure of non-solar radiation heat flow through your window. Having a low U-value appears to be less important in a warm climate than in a cool climate (see my graphic modified from the Collaborative above). A thermally broken metal frame is less efficient, but “only” results in heating and cooling costs some 5 percent higher than non-metal windows for San Antonio (some green-tinged folks would cringe at me using the word “only” here; see my modified graphic above).

The Efficient Windows Collaborative has a window selection tool to help folks evaluate different windows and identify manufacturers that meet your goals. They also recommend checking out some free software from Lawrence Berkeley Labs if you want to do your own thermal modeling. I don’t know about you, but that sounds hot!