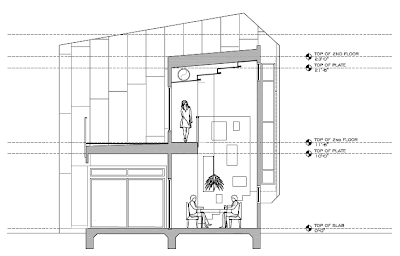 Here's the latest section through the sandcrawler. Not as cool as it was before with the mouthy balcony off the second floor (to the left of the solid structure shown above), but still cool.

After wandering about the Cool Home Tour and seeing a couple clerestories and asking The Architect about them, we now have one (easily added since we already had the double height space). I think all that was needed was a way to naturally direct hot air toward an openable window at the tippytop of the wall.

After further discussions last weekend, we're going to shorten the balcony that's shown (it feeds into the master) and reconfigure the sliding doors below (which go into the kitchen). This will allow the downstairs patio to be screened off with a retractable screen (added now or added later depending on budget...), allow a door from the kitchen to the bbq outside of the on-again-off-again screened area, and allow more light into the adjoining rooms, something I've been concerned about.
Posted by bubba of the bubbles at 6:25 AM