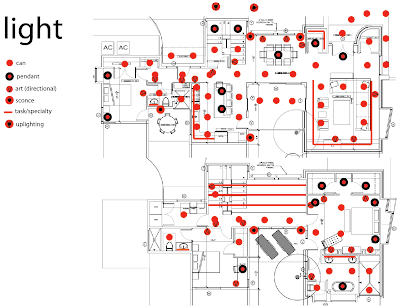 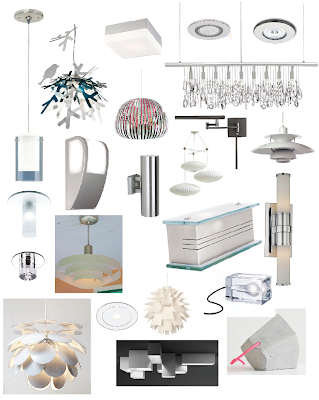 Just read a blog over yonder about lighting design which inspired me to work up the above schematic (click on it for a larger version). I have no idea if what I've done is actionable, but it sure felt good! I love me some pendant lamps (read the haiku below), so I may have gone a little crazy there (my bride is not so crazy about pendants; O the things you learn about someone after you say "I do!"). I may have gone a little crazy elsewheres too since I followed the (developed-during-the-process) cardinal rule of "If in doubt, put a can there."
The collage shows lights we've been looking at and, in a few cases, acquired. Don't worry: we're not putting all of these in the house! Some are included just because they're too darn cool (that cubist ceiling massing toward the bottom). My bride is intent on hanging the beautiful linear chandelier above the dining room table. Saturn's ring light (with part of an orange wall behind it [our neighbor's house!]) is the same as two vintage pendants we recently purchased for the kitchen island (they're from a midcentury modern schoolhouse). We also have the pendant with the little bird on it to hang over the master tub (something I believe we'll have to install after the home gets inspected...): snagged it for 66 percent off! Love love love the concrete up-light with the pink cord. All the "flying saucers" are potential can light covers.
We recently toured a house assembled by a potential builder for a homeowner with an impressive collection of art. The owner (who greeted us with wine and cheese!) had directional can lights just to illuminate his paintings, so I've sprinkled in a pinch of those as well since we loved the effect. As far as outdoor lighting goes, I added some spots for the sandcrawler. It moves slow, but people need to be able to see the sandcrawler coming. I reckon at some point The Architect will weigh in on lighting design. Perhaps this is a start...
As promised, a haiku (in the American Standard form) for pendant lamps:
reaching from the sky
illuminated sculpture
whispers from the sun...
Posted by bubba of the bubbles at 6:54 PM