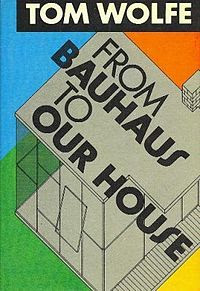 The esteemed Tom Wolfe
And modern architecture
Do not quite square up…
“From Bauhaus to Our House” by Tom Wolfe (yes, THAT Tom Wolfe, the same one who invented the phrase “good ‘ole boy”) is a dripping-in-blood-from-the-fingertips diatribe against modern architecture, specifically the International Style. He simple hates everything about it, from its tenets (glass corners, flat roofs, honest materials, lack of color, expressed structure) to its theoretical underpinnings (really, he hates the simple fact it has theoretical underpinnings) to his belief that modernism changed architecture from a client-focused endeavor to an architect-focused endeavor (one cannot break with theory, after all…).
Tom claims that the International Style (so named because early practitioners from a variety of countries produced structures that looked very similar) has deep Marxist/socialist roots (a potentially powerful [and potentially hyped?] argument as this book was published in the heat of the cold war in 1981). The Internationalists set out to create a purer form of architecture unadorned with frivolous decoration. According to Wolfe, the Internationalists eliminated anything perceived as bourgeois from their structures. Decorative trim? Gaudy jewels of the spoiled princess... Pitched roofs? Crowns of decrepit nobility... Color? Garish badge of the boorish braggart...
Internationalists strived to strip structure to its pure and honest essence, all for the common man (and common woman, one presumes). Ironically, homes in the International Style tend to only be built and owned by the upper middle class or wealthy. As the internet-infused youth yarble these days: “FAIL.”
Wolfe blames the movement of the modern malaise to our American shores on the eviction of the Bauhaus elite from Nazi Germany (another reason for him to hate Hitler, I presume). Once installed into positions of influence by adoring fans, the Bauhausers set about Bauhausing the world. Mies van der Rohe, he of “Less is more”, the Sears (now Willis) Tower, the Barcelona Chair, and “My architecture is almost nothing”, was a leading lieutenant of this German architectural invasion. You can pretty much blame him for blocky glass buildings or, in Wolfe’s eyes, for ruining the world.
And while modern architecture is not for everyone, there is beauty there, both in the houses and in the ideas behind the houses. The Schroeder House, Falling Water (Frank Lloyd Wright’s [half] answer to International Style), the Mandel House, the Lovell House, and many others are quite beautiful and striking, in part due to how radical they were for their time and in part because they simply are what they are: sculptural works of art born from the hands of genius. Minimal yet artfully assembled. Unadorned yet adorable. Unfortunately, Wolfe doesn’t see this beauty among the blockiness, lost as he is, I imagine, in a bonfire of cubist bathroom vanities yearning bitterly for days gone by…
Posted by bubba of the bubbles at 8:57 PM