haiku for the book "Schindler and the Small House" by the Boston Architectural research Center (and interview with Bill Boehm!) 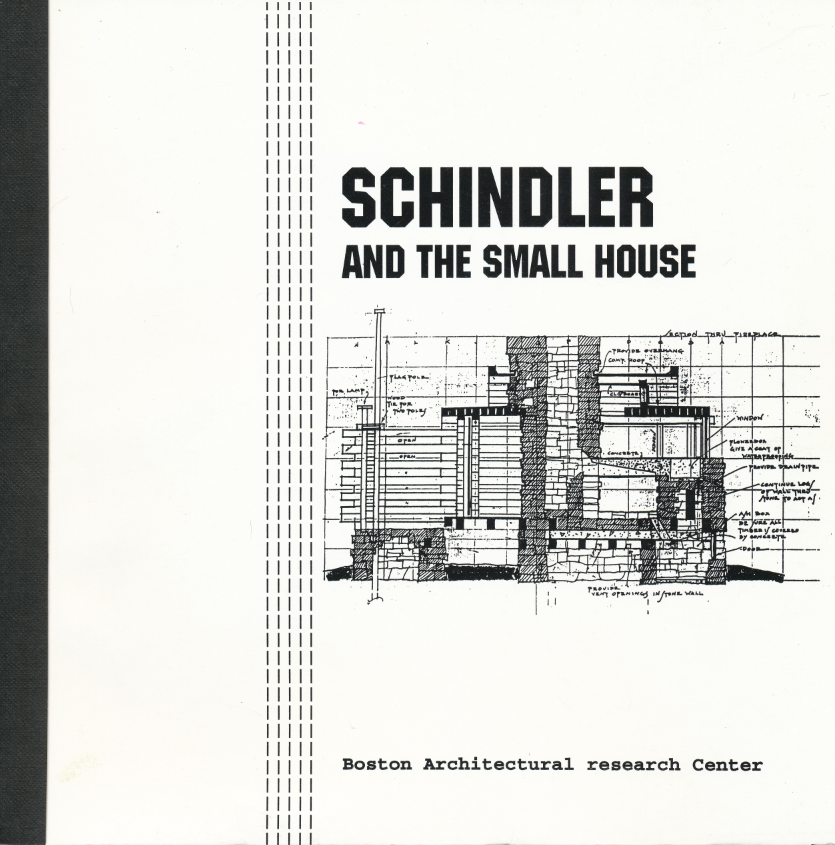 out in the dark woods
a cabin made of hewn logs
this ain't Abe's cabin...


I have a deep fascination with R.M. Schindler's log cabin. After trying to con(vince) Steve Wallet into generating a three-dimensional model of the cabin (he only does realized projects...), he turned me on to this little publication where the authors, Bill Boehm, Daniel Johnson, and Julia Nudent, built a half scale model of the structure.  Bill Boehm, who is now the lead at Boehm Architecture, was kind enough to hook me up with a copy.

As the title suggests, this 56-page book is focused on Schindler's small houses, dividing his homes into different typologies:

Boehm notes that about one-third of the 180 single-family and duplexes Schindler designed were less than 1,400 square feet. He also summarizes Schindler's space architecture as integration with the landscape, interlocking spaces, light and lightness, and a limited palette of natural materials.

Boehm notes that Schindler's career was focused on houses. Schindler sadly missed out on larger commissions, but that miss allowed him to focus almost exclusively on houses his entire career. In addition to era photos and floor plans of various houses, the book includes photos of scale models made at the research Center. However, the real treat in the book is Schindler's cabin.

Schindler designed the cabin in 1916 and then finished up the drawings at Taliesen the following year. As the Boehm notes, the log cabin predates his later focus on small affordable houses. The 14-foot by 36-foot cabin has two rooms and used simple materials. According to Boehm, Schindler addressed affordability, construction technology, Modernist formal principles, and vernacular influences with the cabin.

The book also includes David Gedhard's observations about the cabin:
Boehm and company built Schindler's cabin at half scale using styrofoam for masonry, Sonopost protective packaging supports for timber, and honey-combed craft board for the roof and floor. The cabin was shown in Boston, Massachusetts; Northfield, Vermont; and Buffalo, New York. There are many photos of the construction and display of the cabin (in addition to the full plans for the cabin as well). Bill Boehm was also kind enough to agree to an interview from yours truly.


Whatever happened to the model of the log cabin?

It was re-assembled once at Norwich University in Vermont, and then recycled.


There doesn't seem to be much backstory on the log cabin except dates for when Schindler designed it and drew up the plans. I've read that it was a purely speculative, theoretical design. However, his site plan seems to suggest an actual site ("old fence", "old hedge"). Do you think the cabin was designed for a real space?

It's a good question, and a good mystery, which an ambitious scholar could dig into in the Schindler archives at the University of California at Santa Barbara. The site plan is a bit odd for a rustic retreat - it is  very controlled - with prim shrubbery and paths (as well as the 'old fence' and 'old hedge') all following his 2'x2' grid.

There are photos of (balsawood?) models of various houses presented in the book. Are these models y'all put together?

Yes. We built four models for the exhibition. Two of them still exist in my office.


How has Schindler influenced your work?

I am a believer of modestly scaled homes and "right-sized" spaces. BecauseI work in the Boston area, which is already built up, most of my work is either renovations of older homes or new affordable housing. In both cases, space is at a premium. Schindler made small houses that work brilliantly, and are sculptural at the same time.

I love his own home, AKA the Schindler-Chase home. It is minimal and sculptural. It integrates the landscape with the interior beautifully for an urban home without a lot of land. It is also idealistic, an experiment in cooperative living (that ultimately didn't work out); a demonstration of how architecture can be in service of a social concept.


Why is "research" not capitalized for the name of the Boston Architectural research Center?

Because I was inserting research in to the Boston Architectural Center!


And there you have it. I hope to post more soon about the cabin.
Posted by bubba of the bubbles at 8:07 AM