The builder sent over the draft orders from Ferguson, the supplier of such things, for review. Let me tell you, you need to check this stuff closely when you see it! First, we needed to identify the hand of our tubs (hadn't been asked that before, so that's cool). Second, we got a "Are you sure?" question on the moving-air size of the vent hood (We do appreciate "Are you sure?" type questions since we're rarely 100 percent sure). Third, we found some errors (the range hood somehow changed from white enamel to stainless steel; only noticed because the cost was about ~$450 higher for stainless steel). Fourth, the kitchen faucet changed from "by others" to them ordering it. Fifth, the pot filler showed up as them ordering it (it should be "by others" since we already have it). And sixth, the foot faucet changed from them ordering it to "by others". Talk about entropy in action!

On the appliance side, we changed the fridge to the Whirlpool White Ice version which is (of course) more expensive (sigh...). The White Ice version is a better fridge that will take advantage of the space we have there, match the oven/microwave better, and have in-door ice and (filtered) water, something the bride would like. We considered getting the matching Whirlpool dishwasher, but the Bosch we are getting is so highly rated by Consumer Reports as compared to the Whirlpool and generally raved about by owners, we're choosing function over form. Since we've never had a quiet dishwasher before, we're wondering what that will be like...

Our cooktop (what the brits refer to as a "hob") arrived from Italy. I'm rather amazed: It took six weeks of back and forth emails to confirm delivery details (it was taking the Italians a week to respond to each email I sent...). But it's here, and safely! And it looks mighty fine. 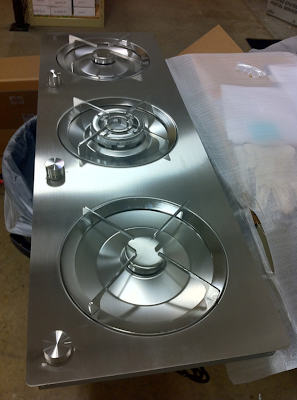 guest bath faucet is here (and then away...)

Received the faucet the other day. Really, really nice. Love the design, but... the faucet arm on the one we got is crooked! Mega-kudos to Overstock.com for making it amazingly easy to return the item and get a new one shipped immediately. Now we'll see if the flaw we saw is a flaw or endemic of all their faucets... 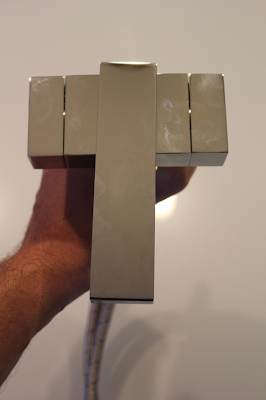 We've written previously about the framers not getting the horse wall between the tub and shower correct. This created a barrage of emails after we noted that it the wall wasn't quite right. The subsequent concern from the builder was: How stable will that sucker be? After expressing a desire to keep the wall "ponied", this prompted pulling in the engineer to design some metal footings to support the wall. However, a comment from the engineer suggested there still might be some movement "from a strong hand" which was later clarified to mean someone really really strong would have to be pushing really really hard at the tippy-top of the wall (eight feet up there) to get some movement. We're going to keep it ponied (but there's an extra $450 in metalwork and installation; I need to check how much $$ is left in the contingency fund!).

It's been interesting watching the framing go up. I'll see things that are wrong and decide to not comment on them until later, and they'll get fixed/addressed "on their own". I've only yipped and yapped about stuff that, if built upon, will be harder to redo later, or will take some doing to address. In other cases, I know I'll be able to yip and yap after the framing is "done". The builder/framers clearly have their own QA working, so best to leave them alone until the very end.

According to the builder, the framing should be completed by next week, the windows arrive on the 5th, and the stucco goes up on the 10th. Holy moly, that's fast! We need to all the MEP (how the cool kids refer to mechanical-electrical-plumbing) rough-in materials on site before the stucco starts.

All in all, things are going good. Some dips into the contingency fund, but that's to be expected.

Posted with Blogsy
Posted by bubba of the bubbles at 3:18 PM