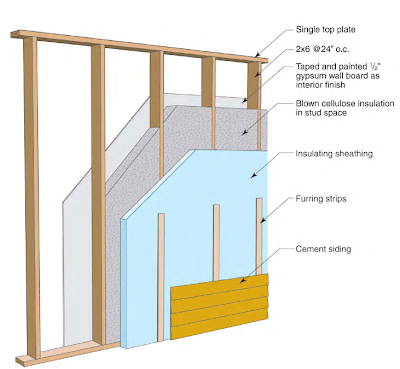 The passivhaus movement has gotten me interested in energy efficient wall and roof design. As it turns out, there’s more to a wall than nailing a few two by fours together and covering them with Hardie board. Ultimately, a wall needs to be designed to address expected weather conditions. A poorly designed wall will cost you money in increased heating and cooling costs and could, in wet and humid climates, reward you with a serious mold problem. Interestingly, there is a push and pull between designing walls for cold versus hot climates: design choices for hot sometimes work against choices you would make for cold and vice versa.

Down here in the hot and humid south, we have to mostly worry about heat and moisture. That makes me a little suspicious of the passivhaus standards which are strongly influenced by the climate in their German birthplace. Nonetheless, the goals of passivhaus are admirable but perhaps need to be adjusted for our southern climate.

A great resource I’ve found on wall systems is the Building Science Corporation website. They have a number of free PDFs about various building science topics, including those specific to various building climate zones across the United States. And they have quite a collection of articles on wall systems. They also have a nicely written general article about highly insulated wall systems for the United States. Building America, a program by the U.S. Department of Energy, also provides energy efficient building design suggestions, although they generally have less ambitious goals than other programs. Nonetheless, they have climate-specific resources, case studies, and economic analyses that are quite useful.

So what do these folks suggest for houses built in Austin, Texas?

Building Science Corp attempts to balance cost with performance (and hand-in-hand with cost is the familiarity of the trades with high-efficient wall systems), hence the overall lower R values and higher U values than passivhaus. Furthermore, the Corp’s guidelines are independent of whole-house performance. As far as a wall is concerned, the amount of window coverage has a huge impact on the overall performance of the wall. For example, the wall for the Austin passivhaus is R-60, but those windows are R-4, greatly reducing the efficiency of the wall and the house as a whole (vampires probably have the most energy efficient homes around…).

I’ve also been following a blog by Gregory La Vardera who has recently been writing about wall systems. Something intriguing that he proposes is horizontally furring the interior side of exterior walls with two by twos. This gives a pathway for pipes and wires without compromising the insulation, and hence the R value, of the outside wall. Apparently, electricians and plumbers are notorious for hacking away at wall systems to get their job done, thereby compromising the energy efficiency of the design. Maintaining the integrity of the wall system is doubly important for homes that require some flavor of vapor barrier toward the inside of the house (typical for colder climates). A vapor barrier with lots of holes in it is hardly a vapor barrier. Fortunately, in hot and humid climates, the vapor barrier is typically toward the outside of the wall system.

I don’t know the gory details of what The Architect has planned for our walls at this point. The outer walls are two by sixes, and we’ve talked about closed-cell spray foam, although sprayed-in cellulose seems to be the preferred choice for greenies (and it’s less expensive than foam). We plan to use advanced framing, which minimizes thermal bridging (pathways for heat to move into or out of your house, usually through the framing). One builder we talked to felt that the roof was the most important feature in our climate and suggested a metal roof painted white to reflect the brutal Texas sun as much as possible. Passivhausers as well as others work to include thermal breaks in wall and roof design, especially in hot climates. Any hunk of wood or metal that extends from the exterior of the home to the interior provides a pathway for heat. A thermal break is generally accomplished by covering the exterior with non-structural insulation sheathing (this can also be accomplished with structural insulation such as structural insulation panels, what the cool kids call “SIPs”).

So, here is what I’ve learned about what should be done in our hot and humid climate:

From Building America (a Department of Energy program that strives to produce houses 30 to 50 percent more efficient than those that meet the 1993 Model Energy Code):
- Slab: Should have 6-mil polyethylene sheeting directly under it to control vapor and provide a capillary break (to prevent water wicking through the slab and into the house).
- Slab: Sub slab drainage should consist of a gravel capillary break beneath the vapor retarder.
- Slab: Don’t use sand anywhere; address differential drying and cracking through low water-to-concrete ratio and a wetted burlap covering during the initial drying.
- Walls: No vinyl wallpaper on the interior of exterior walls; wall coverings need to be breathable.
- Walls: No vapor barriers on the inside of outside walls
- Walls: Backprime all wood used on outside of house
- Walls: Create an airspace behind every outside surface and provide for drainage. This is especially important for brick and masonry.
- Walls: Use either interior gypsum board, exterior sheathing, or both as air flow retarders.
- Walls: Ensure that plumbing, showers, and tubs on exterior walls are properly sealed: These are often where the largest penetrations in the house occur.
- Ceilings/roof: No recessed lighting into unconditioned spaces.
- Walls: No need for a rain screen, but a need for a drainage plane/drainage space.

From Building Science Corporation on building in hot and humid climates:
- Walls: Need to dry to both the interior and exterior.
- Walls: Bricks are “reservoir claddings”: They store moisture. Sun that comes out after a storm can drive that moisture to the interior.
- Walls: The drying potential of a wall decreases with the level of insulation and increases with the rate of airflow.
- Walls: Clad and tape exterior walls with 1 to 4 inches (2 inches recommended for hot and humid climates) of non-structural exterior insulation sheathing (such as expanded polystyrene [EPS], extruded polystyrene [XPS], or polyisocyanurate [polyiso], rigid fiberglass, or mineral wool)
- Roof: 4 inches of nonstructural exterior sheeting, preferably in 2-inch lifts where the lateral seams between sheets are staggered between the lifts.
- Roof/ceiling: Use gypsum board as air barrier; however, that means that there shouldn’t be any ceiling penetrations.

Images respectfully cribbed from Building Science Corporation.
Posted by bubba of the bubbles at 9:56 AM