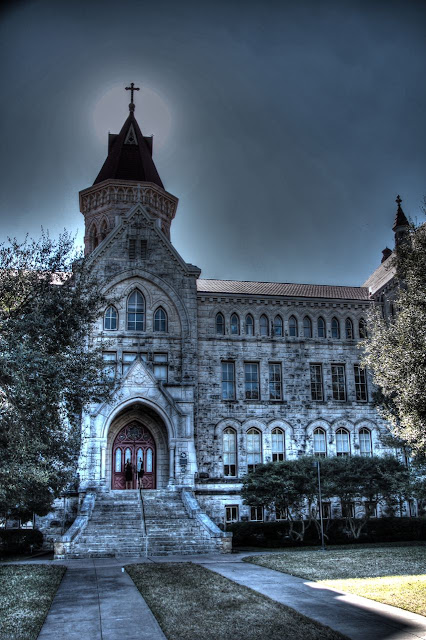 Last weekend, the bride and I wandered down to St. Edward's University in South Austin with the primary mission of visiting Alejandro Aravena's dormitory. We also wandered the grounds of St Eds since we were aware that there were other pieces of architecture on campus (and our fitbits needed the steps). The biggest unexpected surprise was the breathtaking panoramic view of downtown Austin:

What a view from the front lawn of Old Main!

Sitting atop an old volcanic neck, Old Main (show above) commands a spectacular hilltop view of the central city. A sunset with wine and cheese is in our near future...

St. Edward's Academy was founded in 1873 by Edward Sorin, the same dude that founded Notre Dame. The school was originally formed to provide primary-level education to the area's farm boys.  Under new leadership, the school was rechristened St. Edwards's College in 1885. In 1888 the college hired the architect Nicholas J. Clayton of Galveston to design the main building in Gothic Revival style (much of the building burned in 1903 but was rebuilt). In 1921 the school added college-level courses and in 1925 rechartered itself as a university. St Eds presently has 5,000 undergraduate and graduate students. 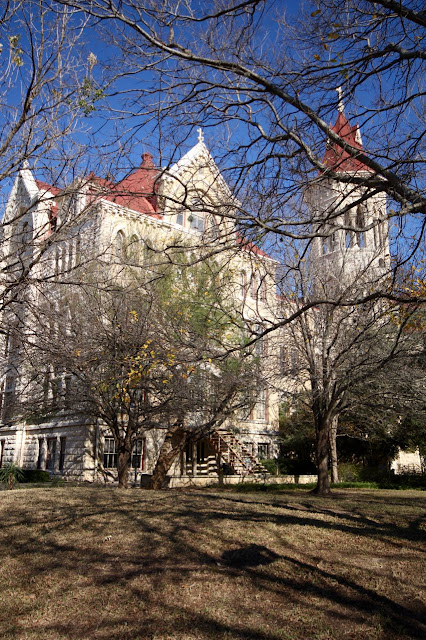 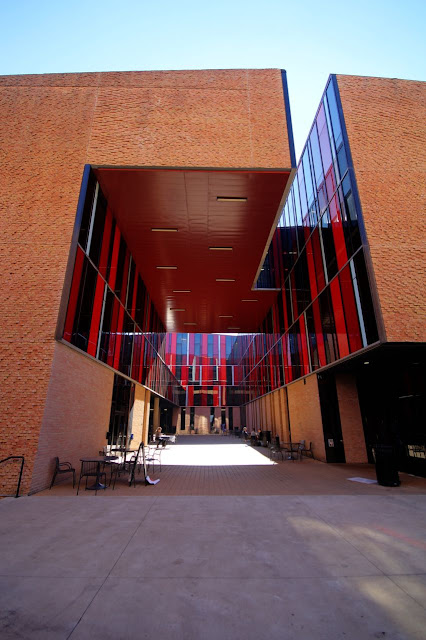 Over the past decade and a half the school has undergone a revitalization and a building boom, so there's a nice mix of old, transitional, and new architecture. By our eyes, the quality of that architectural boom has improved with time.

Fleck Hall by Andersson-Wise Architects is a solid Modern building built in 2007 that hugs the original 1958 structure.  It's a brilliant repurposing in that it's not immediately evident. The work also seems to have set the stage for other updatings on campus. 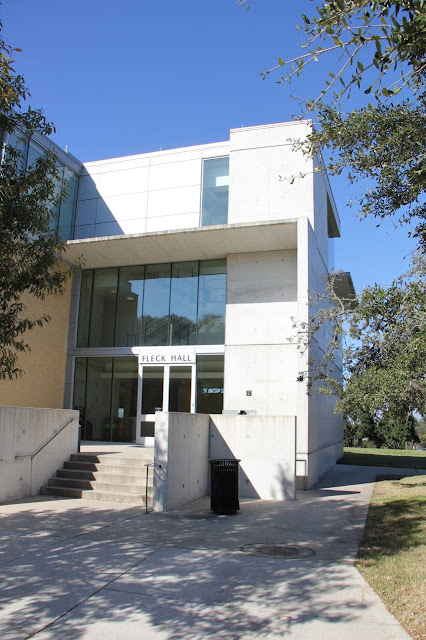 The Munday Library by the Massachusetts firm Sasaki (2013) is also a repurpose/reuse of the old library, not clearly evident from the street: 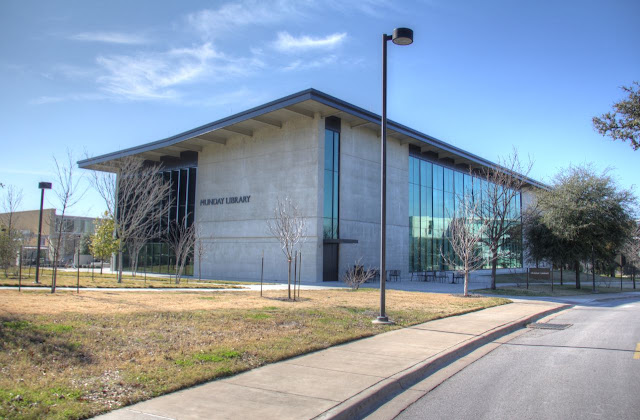 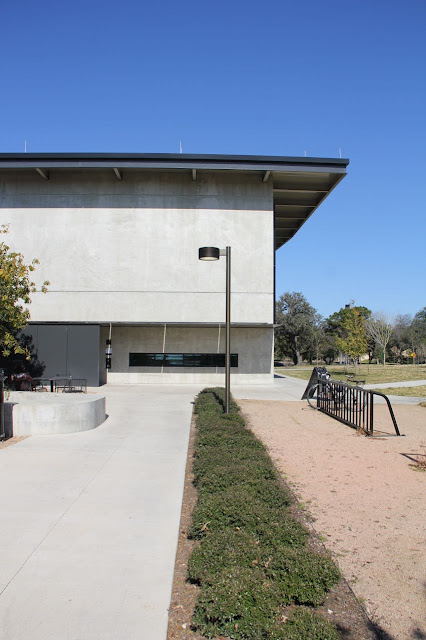 Mell Lawrence Architects had the lead (?; the consortium of architects involved in these projects is dizzying...) on the reworking of the gymnasium, which has a Donald Judd vibe about it: 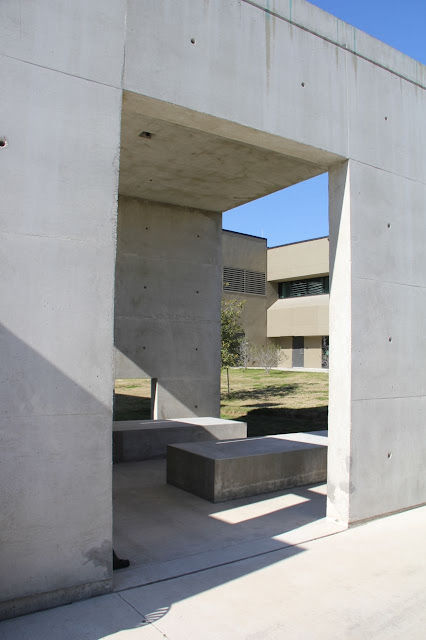 There's a neat piece of water history associated with Fondren Hall, which used to house a natatorium fed with an early brackish artesian well: 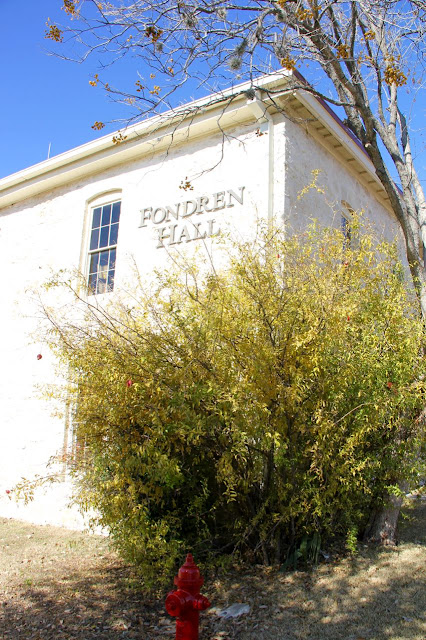 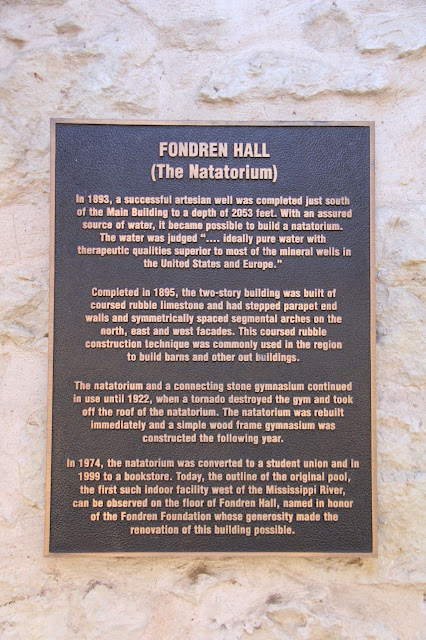 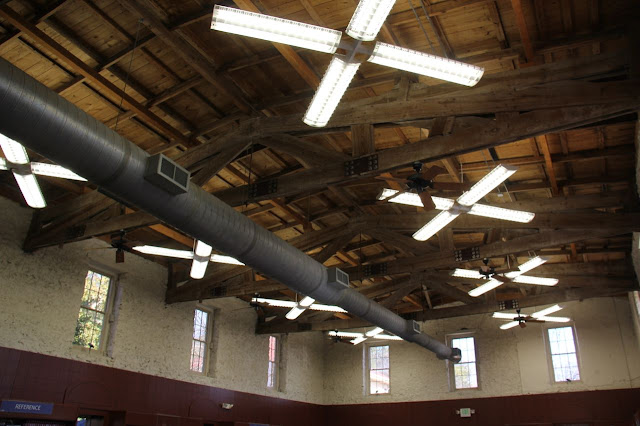 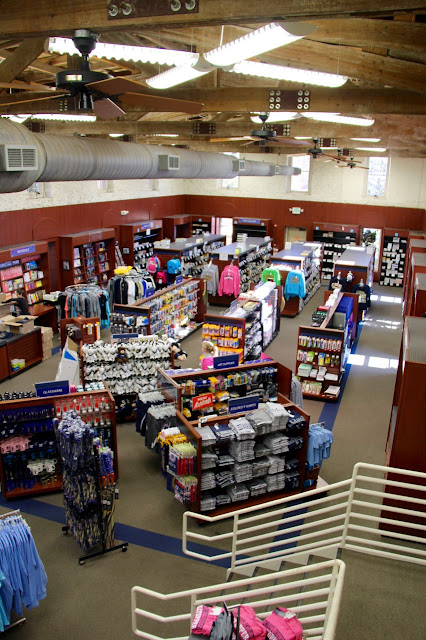 I am not a big fan of Postmodern architecture (actually, I abhor it), so I'm not a big fan of the John Brooks Williams Natural Sciences Center–North designed by Research Facilities Design and Moore Ruble Yudell. (2006): 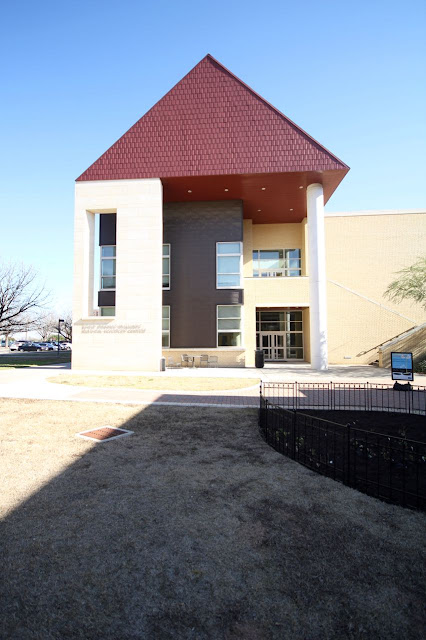 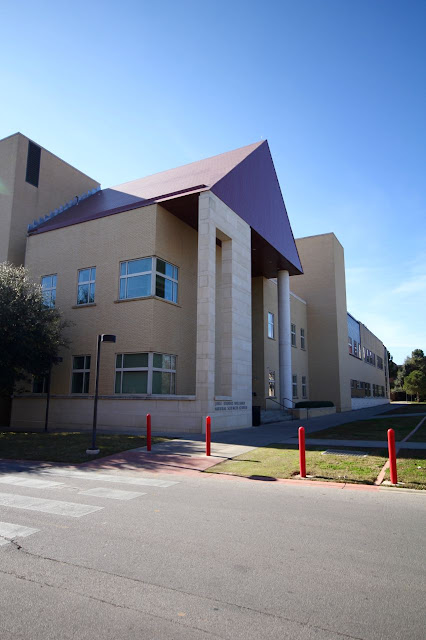 An addition to the Science Buidling was led by STG Design: 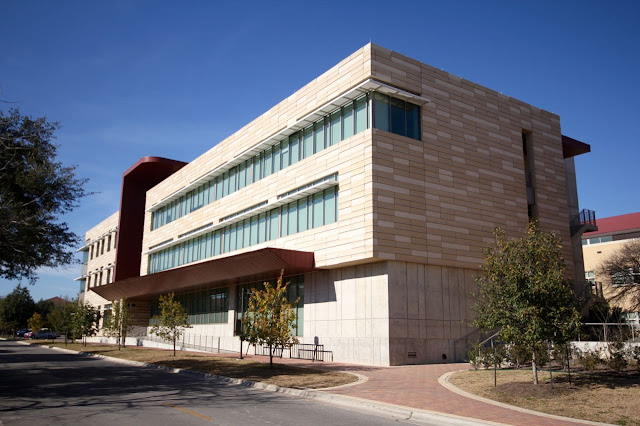 Trustee Hall (2002) by Andersson-Wise Architects is something of a mess, but it's an interesting mess. It's transitional in the sense that this was one of the first large new construction projects on campus; therefore, I suspect the administration was reluctant to step too far away from the revivalism of Old Main. The building smacks of King Arthur Revivalism if King Arthur had lived into the industrial age. 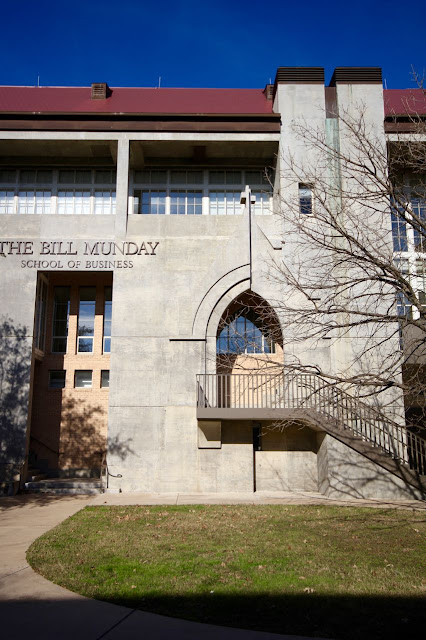 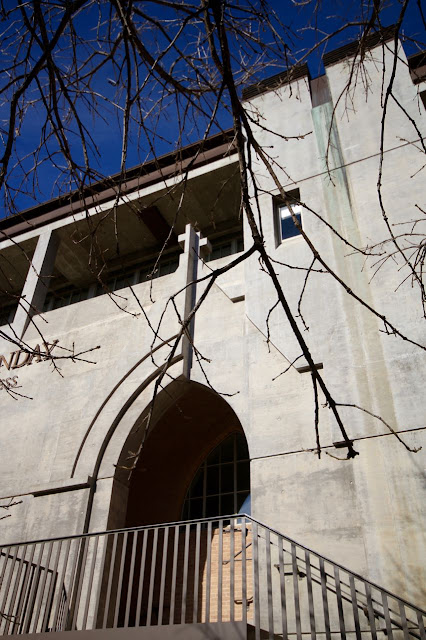 Local firm Pollen Architecture and Design took the lead in handling the addition and garden for the quaint campus chapel: 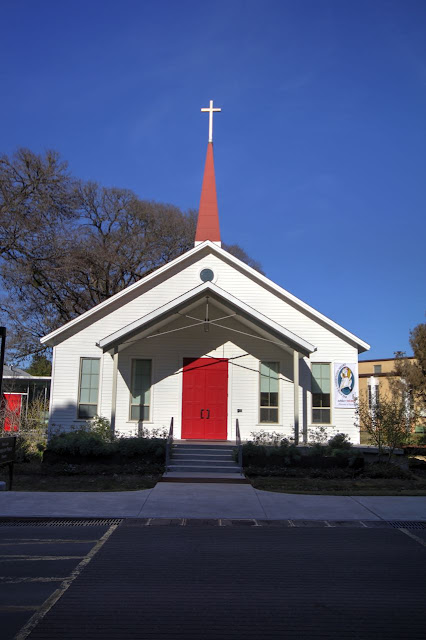 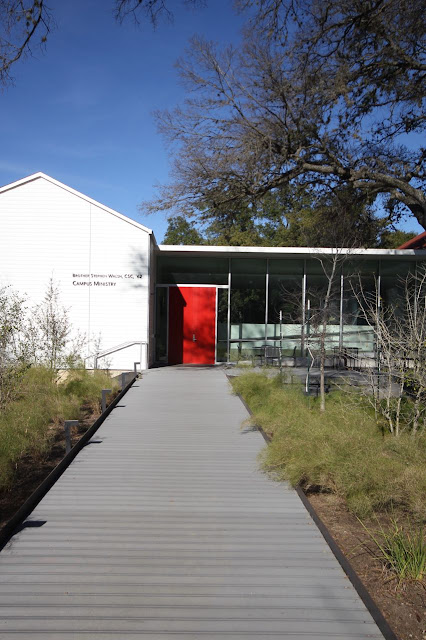 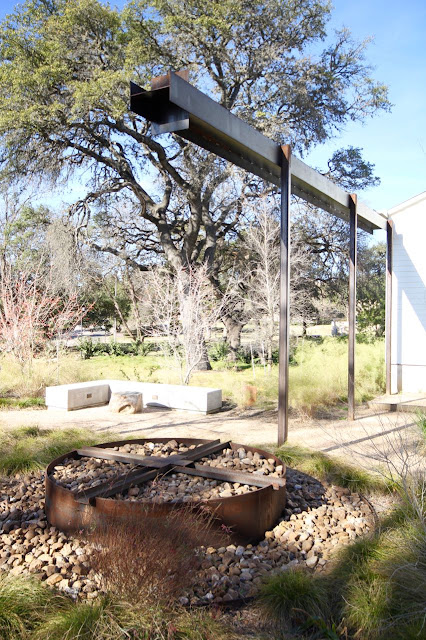 The previous building boom appears to have occurred in the 1950s after WW II as there are a number of Mid Century Modern on campus: 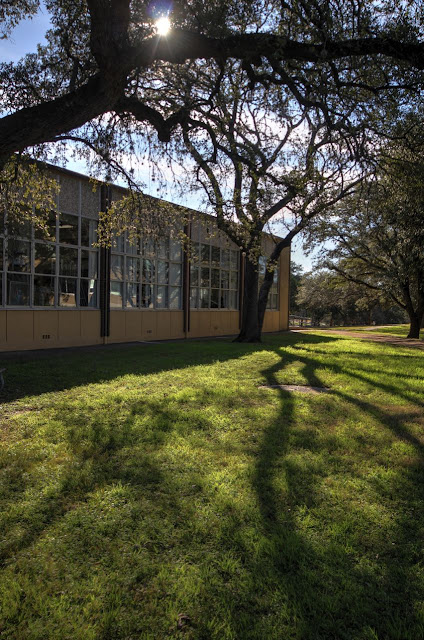 You can see the Mies van der Rohe influence in these buildings. Interestingly, the dark vertical bands you see in the photo above that resemble I-beams are actually made of brick (even floating above the ground a la Mies). 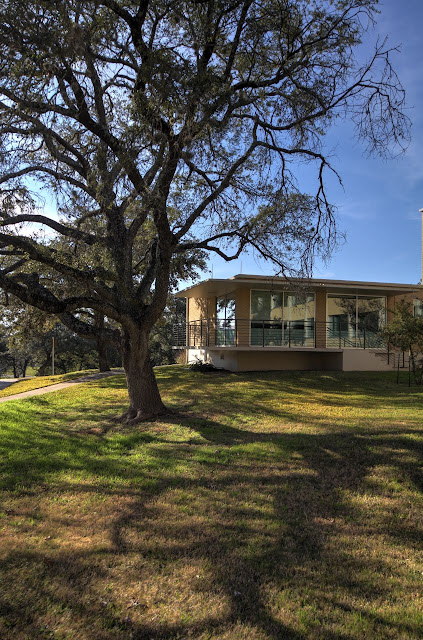 It's unclear who designed the 1950s-era buildings on campus, but this structure above, protruding from a large multi-storeyed building, looks like a Roland Roessner a la his houses on Balcones Drive.

We didn't see all the buildings on campus; there are several more recent structures that we missed. All in all, like many universities, a great place to walk around and see a great range of architecture.
Posted by bubba of the bubbles at 11:44 AM