Off and on I've alluded to our "worms”, a more socially acceptable term for our colony of Black Soldier Fly maggots (thank you, Devon). Yes, you read that right: Maggots. Big juicy Cheeto-sized ones, AKA “my babies”. I don’t know how many we have (a [potentially] hyperbole-infused guestimate is in the title) but there’s a large writhing pile of ’em in our composter. And boy do they eat. A lot.


Truth be told, I’m quite fond of them. So much so, we moved them from the old house to the lot. The movers, at first intrigued by the novelty of maggot moving, were not impressed (4,753 maggots and their accouterments are heavy and [ahem] a little messy; don’t be surprised if you see a special fee if you want your maggots moved in the future).

I didn’t start out loving maggots. My initial goal was to (organically) kill them all after finding them squatting in our composter for a second time (see ancient post from MySpace [remember the promiscuous days of MySpace?] below). But due to the miracle of Google (I’m convinced Google will become the center of a future religion), I immediately saw their value and now cherish them (no hyperbole there: I was really worried about them during the move).

Black Soldier Fly maggots, hipster vegans that they are, love coffee grounds and watermelon (you have never seen a happier pile of maggots until you’ve seen ours doing the “Folgers Boogie”). Among certain circles, I’m even known as the “Maggot Whisperer”, having saved other colonies from impending destruction by revolted (but uneducated) composters. And I even got my first request for a maggot transplant: Moving some of my babies to a new home!

We haven’t talked to the architects about the maggots (yet). We don’t want to press our luck. We’re already fortunate they haven’t hiked because of our special requests for the kittycat (thank Gawd for a down real estate market!).

I wonder if the vet chips worms? 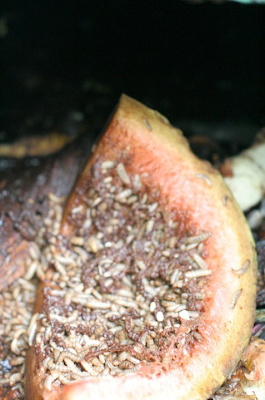 I love my maggots

Late one night, I collected the clippings and whatnot from the to-be-composted bowl and carried them deep into the backyard to the compost pile. After I dumped them onto the pile, I could hear the pile come alive with writhing and rustling. "Bwahhh!" I hooted as I jumped back. I nudged the composter frame and heard the writhing and rustling again, but it was too dark to see what was there. After returning from the house with a flashlight, I nudged the composter frame again and was horrified to see a contorting mass of maggots. "BWAHHH!!!!" I hoot-yelled this time. As I ran back to the house BWAHHing the whole way, my father-in-law (father-in-common-law at the time) was greatly amused.

"Maggots?" he asked, "All that hooting and hollering for a few maggots?" He didn't say the words, but I could read them in his eyes: "Girly. Man."

"These maggots aren't normal maggots," I replied, "Go see them yourself."

Out into the backyard he marched with the flashlight. I watched him go behind the garage to where the compost pile was. "BWAHHH!!!!!" he hoot-hollered while running quickly back to the house "Those are the biggest and creepiest maggots I have ever seen!"

This all happened 10 or 12 years ago. After the maggots appeared, I lost my appetite for maintaining a compost pile. A couple years ago I got the urge to compost again, this time mostly for leaves. As I fed the composter, I watched for the maggots. Fortunately, they didn't come. We then began feeding kitchen scraps into the maw of the composter being careful to not put meat into it, convinced rotting meat had attracted the maggots all those years ago. Last month, when I opened the lid to the composter, the maggots were back. A big, juicy, boiling mass of worms, these maggots were each an inch long and as thick as a Cheeto. Interestingly, they loved coffee grounds, squeezing out from the goo below in the hundreds to have a writhing caffeine-fueled orgy.

A couple days ago, after witnessing another frenetic maggot dance upon a week's worth of ground coffee beans, I shook my fist at the sky and yelped "BWAHH!!!! I WILL GOOGLE A SOLUTION TO MY MAGGOT PROBLEM!!!"

After googling "maggots" and "compost," I learned that these large, pasty-skinned wigglers are the larvae of black soldier flies. It turns out these maggots are not uncommon, love food scraps, and are a welcome addition to a compost pile. They are also high in protein. Freakily, when the maggots pupate, the resulting fly doesn't have a mouth. The only purpose of the fly is to mate, something it needs to do quickly as it only lives for a couple days. The black soldier maggots are very active, process a lot of organic matter quickly and are even used industrially to break down tons of manure at hog and cattle farms. One entomologist noted that they love coffee grounds (those're my boys!). One posting string started off with "How do I get rid of these maggots?" and ended with someone else asking "Can someone please send me some maggots?" after an entomologist explained the innocuousness and helpfulness of black soldier fly larvae.

I'm fortunate, I now understand, that I've got a few hundred maggots I can call my own... 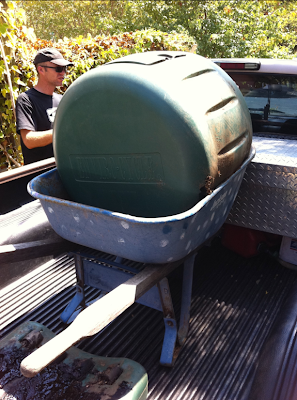 Maggots on the move.
Posted by bubba of the bubbles at 10:16 PM