haiku for the book "Modern Architecture: Romanticism and Reintegration" by Henry-Russell Hitchcock 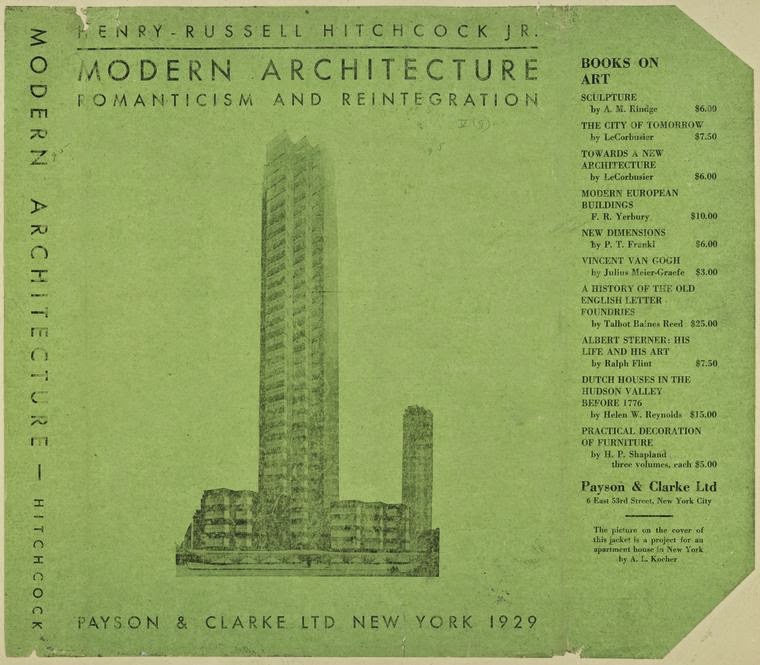 there is transition
connections to histories
before there is "new"

This book, published in 1929, is rather remarkable. It predates the 1932 MoMA show on Modern architecture by a few years (really, it laid the foundation for the show) and represents Henry-Russell Hitchcock's attempt to document the transition from traditional style to the International Style (and he uses those words [international style {lowercase}] in this book). He refers to the transitional period between classical architecture and "true" Modernism as the "New Tradition" (what I generally refer to as the proto-Modernists) and the practitioners of true Modernism as the "New Pioneers". He stresses that a primary triumph of the New Tradition was the reunification of engineering and art, something eagerly carried forward by the New Pioneers. The book also helps explain why R.M. Schindler was excluded from the 1932 Museum of Modern Art show on Modern architecture, and it has nothing to do with the previously published reasons I've seen.

Modernism has a root tapped deeply into neogothicism, at least on a theoretical basis. G.G. Scott's theories on architecture, articulated in his 1857 book On Gothic Architecture [Hitchcock refers to this title, but it appears he's really referring to Remarks on Secular and Domestic Architecture, Present and Future], stated that the architecture of the future needed to be "eminently practical" and "straight forward" [Scott's emphasis]. Future architecture "...must not strive unduly after artistic effects--it must avoid fantastic and strange forms; it must have a simple primary aim at utility; at, in the first place, thoroughly and in the best way providing for the object for which the building is erected; and, secondly, at expressing that purpose in its architectural aspect..." In other words, as Louis Sullivan stated decades later, form follows function. 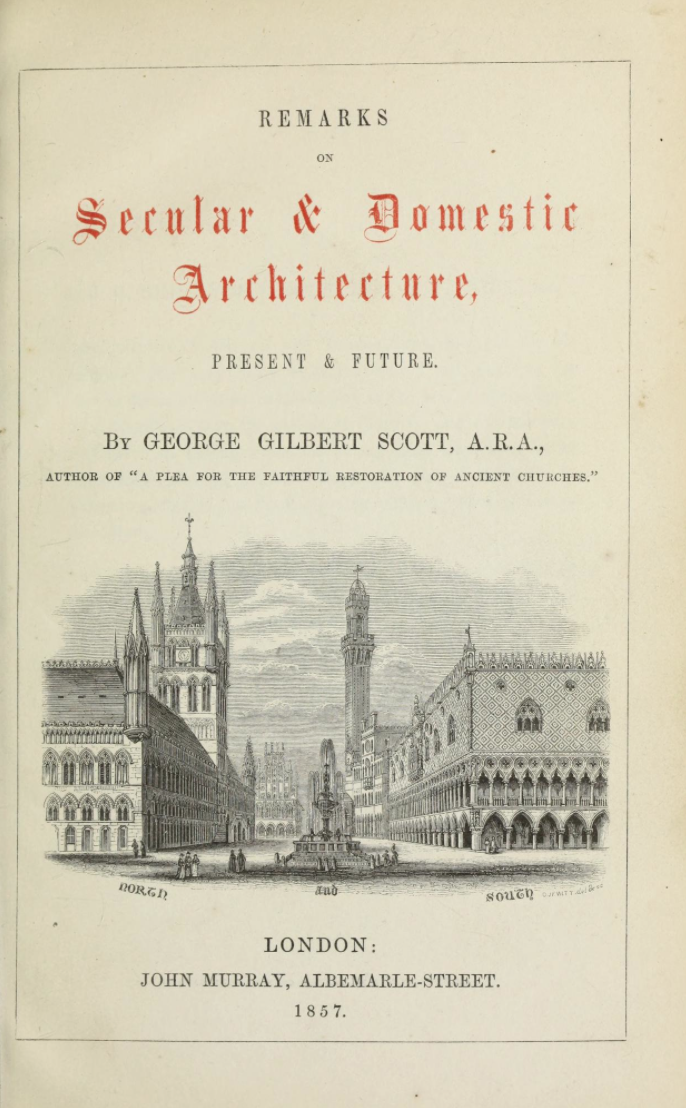 Hitchcock considered H.H. Richardson in addition to Louis Sullivan as paving the way for Frank Lloyd Wright and further considered Richardson as great an architect as Wright. On Wright, Hitchcock writes (and I agree): "[i]t is pertinent to note that his house interiors...were never worthy of his exteriors despite the extraordinary thoroughness with which he studied their design and the excellence of their plans. His rooms were dark, uncomfortable and generally at once cluttered and monotonous." He considered the Barnsdall House "...one of his least successful buildings." (even Wright termed it "transitional").

Hitchcock noted that "Neutra alone is a worthy disciple of Wright." and observed that Neutra is "...definitely a New Pioneer." Hitchcock ends his discussion on Wright by noting that "[i]t remains to be said in conclusion that he is, without qualification and without the support of any worthy colleagues or important American followers, the greatest American architect of the first quarter of the twentieth century." I'm sure Frank hated that.

Hitchcock observed that Le Corbusier was among the few, if not the first, able to make his building and his theories work as "an integrated whole". Hitchcock credited Corbusier with being the first to break completely from the New Tradition. About Mies van der Rohe, Hitchcock wrote (and accurately predicted) that "[h]e remains still primarily a man of promise. The line of his works suggests that that promise will in time--for he does not build much nor move rapidly--be amply fulfilled."

Hitchcock observed that America had struggled up to that time with not only the work of the New Pioneers but even the New Tradition. He marked the competition for the Tribune Tower in Chicago as a turning point for introducing the New Pioneers (and the New Tradition) to the United States. In America, he recognized Neutra as the most important New Pioneer in America, impressed as he was by Neutra's book, Wie Baut Amerika? He also identifies Neutra as Wright's "most significant pupil" (I think it's a stretch to call Neutra a pupil of Wright via the few months he worked with Wright, but there it is). 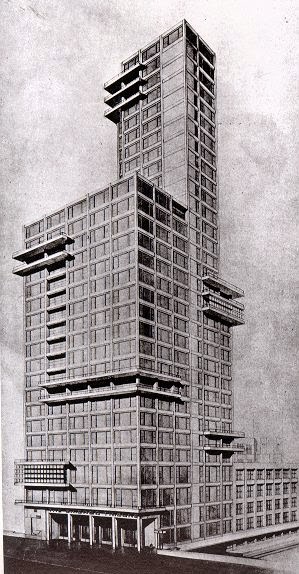 Walter Gropius' submission to the Chicago Tribune tower competition in 1922

On Schindler, Hitchcock wrote: "Another Austrian in California, Schindler, has remained closer to the New Tradition. Yet at the same time he has paralleled with mediocre success the more extreme aesthetic researches of Le Corbusier and the men of de Stijl." This is a fascinating statement. One, it suggests Hitchcock had seen a wide swath of Schindler's structures. Two, it's clear he wasn't impressed with Schindler's earlier solo work (probably his house, perhaps the Pueblo-Ribera Apartments, and the How House) since they could be seen to have one foot in Arts and Crafts (and perhaps the New Traditionalist Wright). And three, Hitchcock recognized, perhaps in Schindler's contemporary work, he "paralleled" key elements of Corbusier and de Stijl. This last bit is remarkable, an acknowledgement that Schindler was independently developing the best bits of Modern architecture (the best bits as defined by Hitchcock) in southern California (but in a "mediocre" manner).

Being something of an academic in nature, Hitchcock gave greater credence to architects who published theories in addition to building based on those theories versus mere followers aping the new style. Although Schindler had a manifesto, it wasn't published at the time. Moving to America removed him from the network in Europe where he may have been able to publish in the architectural tomes of the times. Although Schindler had plans for a book on American construction, his early success as a builder and the need to support his family (and the Neutras...) kept him from publishing that book. Furthermore, Neutra reneged on his proposal to work with Schindler on the book, something Neutra wrote while living at Schindler's house. 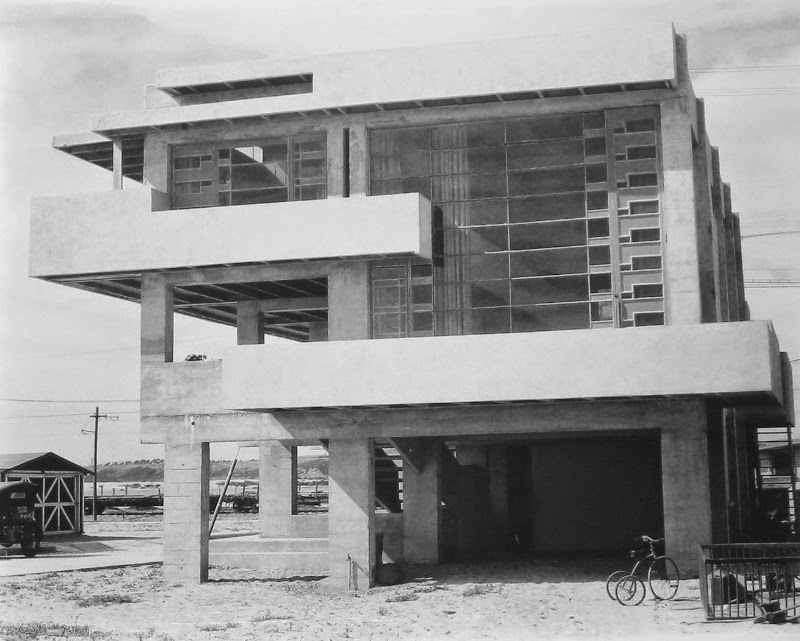 Hitchcock also closely associated the New Pioneers with new construction methods, namely ferroconcrete. In this, he shared the European bias toward solid construction (a bias that still exists today; Europeans are amazed at our affinity to stick [that is, wood] construction). Schindler had this same bias but recognized that pure concrete construction cost too much for the American market, a market used to costs associated with stick construction. At best, Schindler, in his earlier work, attempted to fuse the two before abandoning concrete altogether except for foundations. Hitchcock associated the new architecture with ferroconcrete construction, even scolding Mies for using brick and Corbu for using granite veneer. He was not impressed with Schindler's use of wood: "In the present period of transition, however...traditional materials in general imply the past rather than the present and must be avoided for psychological, not technical, reasons. This is clearly seen in certain Belgian houses in brick, and particularly in Schindler's premature attempt to place a wooden superstructure on a concrete base in 1928, although the result was, all the same, the best house he has so far built."

The above is another remarkable statement. One, it suggests Hitchcock was aware of (and perhaps had even seen) the Lovell Beach House (which was completed in 1927) or, perhaps, the Wolfe House (completed in 1928), both aesthetically in his New Pioneer camp. Two, it suggests that Schindler's use of wood is what excluded him from the 1932 MoMA show, not his aesthetics or, often repeated in publications, his association with Wright (note that Hitchcock's perceived close association of Neutra with Wright didn't exclude Neutra from the show). And three, Hitchcock's use of the word "premature" suggests he thought that wood would be "reintroduced" in the new architecture, but that there needed to be a clear break with the past before bringing back more conventional materials (For example, he wrote: "Once the traditional interpretation of brick and stone is forgotten there may well be a considerable return to their use where they are technically and economically satisfactory."). In this, he suggests Schindler was ahead of his time, at least in Hitchcock's opinion. In fact, Schindler was working with the reality of American construction, something Hitchcock, not an architect, wouldn't understand (the classic "the academic having no clue about how the real world works").

It's also been suggested that Schindler was excluded from the MoMA show because of an east-coast bias or a European-bias. Neutra was in the show, so that dismisses the east-coast bias. And Schindler, just like Neutra, was Austrian, so that dismisses the European bias. However, there was a European bias in construction techniques that hurt Hitchcock's perception of Schindler's work.

All in all, this is a well written and amazingly thorough book documenting Modern architecture as it was by 1929. Not inappropriately, Hitchcock connects the dots between classicism and the transition to the New Tradition from which the New Pioneers (and the new architecture) were born. With this book, he also set the stage for the 1932 MoMA show on Modernism, essentially more formally and more broadly introducing Modernism to the United States. Connections made at that show ultimately led to Gropius and Mies van der Rohe, among others, coming to the United States as Germany went down a path toward Nazism and war. And that injection of Germanic architects, along with the influence of Schindler and Neutra and their followers, ultimately led to mid-century modern and Modern conquering the corporate world.