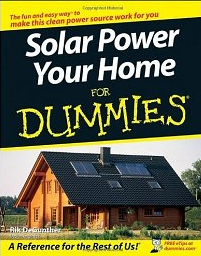 here comes the sun(shine)
photovoltaic rooftop
spin that meter back!

We’re interested in putting solar on our house and, having had some luck with a previous Dummies book, picked this one up. One word: Yuck. Poorly written with, even worse, the majority of the words not about solar. In reality, what needs to be said about putting solar on your house can be said, I now know, in a pamphlet. To fill the rest of the book, the author repeats himself or writes about weatherizing, or other sources of energy loosely connected to solar. For example, there’s a section about wind power because “if not for the sun, there wouldn’t be wind.” Well hell, where’s the heating oil and natural gas chapters? If not for the sun, they wouldn’t be around either. Or, for that matter, nuclear power, because without the sun, there wouldn’t be miners mining uranium because mommy and daddy wouldn’t have been able to see each other at the Frisbee golf tournament before their courting days. The book is also strongly biased toward northern climes. Anything it says about passive solar and windows doesn’t apply to the steamy and sunny south.

The book wasn’t a total loss. One interesting tidbit I gleaned was that instead of orienting your solar panels to maximize exposure to the sun, consider orienting them to maximize exposure to the sun when the cost of electricity is higher (such as later in the day). Alas, Austin doesn’t bill that way (time of day based billing), so there’s little financial benefit round these parts. But a neat concept if this is something you have to worry about. The other tidbit was that you only lose 10 percent of solar exposure if your house deviants 20 percent from an ideal east-west orientation (don’t tell The Architect, this…). The book also had a neat tip about getting a solar cell for your auto to trickle charge your battery.

If you’re a complete newbie to solar (arguably the purpose of a Dummies book…), I think the book may be beneficial. If you’re a notch above a Dummy, consider something else…
Posted by bubba of the bubbles at 12:23 PM