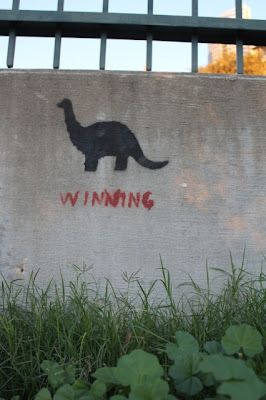 This post may be belated, or it may not. A build-blog pal noted the “hoping” in the “We are hoping to build a house in Allandale” I carefully blurted to another pal the other day. Although we are marching down a certain path at the moment, there are off ramps at every turn. So here’s a listing of where our options are at this point:

1. Design our own house and build it. I’ve had several friends (and a builder) say: Design your own house and build it! Although this is, indeed, tempting, I (fortunately) recognize my limitations. I did take a stab at designing a house for another lot we were looking at, but it wasn’t serious. I did it to learn SketchUp and get an understanding of how much space is needed for different rooms (I need to blog about this sometime…). And I realized that what I had put together was unrealistic (The Architect said it was “an unusual house”, and not in a good way). Furthermore, appreciating the art of architecture, I know that we need a real architect to make the magic happen.

2. Find a pre-designed house and build it. As it turns out, there are several places that have house plans for modern houses (for example, here, here, and here [but not here]). However, given the orientation of our lot and concern about thermal gain from south and west facing windows, we’re not really excited about taking this path. I’ve looked at the sites and not found a house that does it for us. Furthermore, it’s difficult to know what it might cost to build the houses on these sites. And if we need modifications, we still need to find an architect.

3. Go pre-fab. An offshoot of finding a pre-designed home and building it is going modular, such as here, here, and here. However, modern prefab often goes for $200 a square foot. If you’re paying that much, you might as well hire an architect and build a custom home. ma modular, an offshoot of Austin’s KRDB, produces modern mods in the $150 a square range. So this is a possibility…

4. Sell the lot and buy downtown. We’ve really been enjoying living downtown in our mid-rise apartment. The industrial, cold modern vibe, the city views, the walkability to restaurants, music, and various happenings: it’s a rather awesome way to live. The primary issues about living downtown are (a) cost [price per square to live down here seems to start at $500), (b) it’s a pain in the patootie to bar-b-que (no bbq’ing on the balcony, and the community cues are nasty…), and (c) no place for or to work on the Isettas (my little cars). We initially worried about not having a garden, but we’re over it (I think…).

5. Sell the lot and buy an existing home. A possibility. In fact, if we were cashed out now, I would be real tempted to buy M.J. Neal’s Ramp House in south Austin, which was recently (still?) on the market. Years ago, when we considered building modern, an architect friend suggested buying instead of building (he’s turning out to be a wise man…).

7. One word: doublewide. I’ve got the junk cars and a tattooed ole lady who wants chickens, so I could just go back to my roots and make it official! And at $30 a square, it’s affordable (to us)! Downside: I would have to learn to like Bud Lite. That, my friends, may be a dealbreaker…

Posted by bubba of the bubbles at 8:47 PM