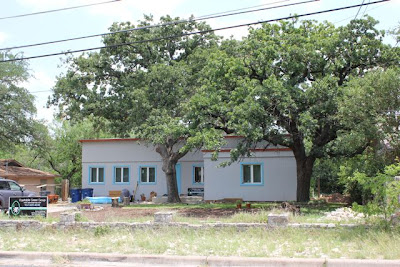 Wandered over to the eastside today to visit with Nicholas Koch. A trailblazer, Nicholas is building the first passivhaus in Texas (that's "passive house" in Texan) and one of the first few passivhäuser (the proper plural of passivhaus…) in the hot and humid southern states. A work and experiment in progress, Nicholas’s project is technically a remodel, but it’s one serious remodel: most of the house was taken down to its bones and redone. Originally, Nicholas planned on razing the house and building a completely new one, but asbestos issues made it more cost effective to cocoon the afflicted siding untouched within the walls of the new house. As a bonus, it added (a little) R-value!

The place seems to be working quite well. I walked in as the day started flirting with 95 degrees Fahrenheit, and the house was comfortable and cool. The house also sports a heat-sink water heater (helps to cool the house in the summer), an energy recovery ventilator (UltimateAir RecoupAerator), and a ¾ ton mini-split to cool 1,800 square feet. Nicholas is still experimenting with distributing air in the house: push or pull? Push the air into the bedrooms or pull air out via the ventilator and let cool air flow in.

Nicholas has a highly insulated floor (R30) because his place is pier and beam. Another house he’s helping to design will have a concrete foundation and no need for crazy-thick insulation, which works against cooling the home in our getting-more-brutal-by-the-moment central Texas climate. In colder climates, passivhäuser are real touchy about breaking the thermal envelope and letting heat go. In hot and humid climates, you have to get the heat and moisture out. Along those lines, Nicholas vents his bathrooms (with timers) and his stovetop to the outdoors. He also plans to put in an outdoor kitchen (to control heat generation inside the home) and an outdoor washer and dryer (dryers suck up a bunch of your preciously cooled air, heats it, and then chucks it out the exhaust). For windows, he used Inline fiberglass with doublepanes from Canada, in large part because they test their products so you know how energy efficient they really are. They’re nice and solid (and energy efficient). He’s now selling them locally. Nicholas is still working on the house, with plans for front and back porches and a 5,000 gallon rainwater harvesting system in addition to the stucco.

In addition to the home tour, Nicholas also gave me a quick tour through the Passivhaus Institute’s three-dimensional-heat-transfer-modeling-in-a-spreadsheet spreadsheet as well as a one-dimensional heat and moisture cladding simulator called WUFI. Darn cool stuff about hot stuff!

notes on the austin passivhaus:

· ¾-inch XPS foam on outside

· bathrooms and range vented to the outside

· Dryer planned for outdoor back porch

Posted by bubba of the bubbles at 6:25 PM