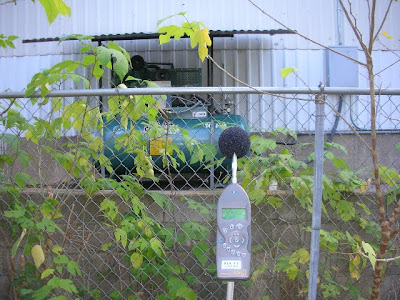 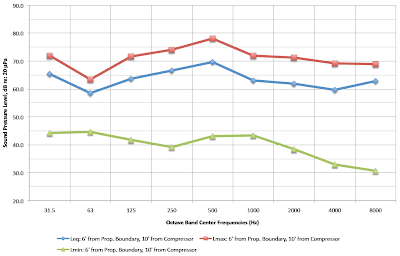 While watching an HGTV show last weekend, two wild and crazy guys were looking to flip a house but were having trouble finding a buyer. "The property has a fatal flaw," explained the agent. "There's a highway behind it. That means the property is worth 10 to 20 percent less than if it didn't have that flaw."

Ultimately, the charms of the lot outpaced the negatives. And my bride, an engineer, is convinced an engineering solution can be attained to deal with the issue. Furthermore, we benefitted from the fatal flaw: We got the lot at 10 to 20 percent less than if it were in the middle of the hood. But now we have to deal with those compressors.

Fortunately, we're pals with a sound engineer, and not one of a musical flavor. J. deals with engineering solutions to deal with noise. He's had an interesting career of working on embassies around the world (where keeping sound from leaking out is an issue...), on hotels near highways and airports, and various other sound issues. He's kind of a quiet guy.

I met J. at the lot, and he quickly set up a microphone and decibel reading and recording equipment. And then we chatted (quietly) about sound.

So how do you deal with sound at the source? The compressors have pressure release valves that periodically hiss like angry sea serpents. J. noted that for 15 to 20 bucks, you can buy silencers for the pressure release valves. I'm guessing that James Bond has silencers on his air compressors. As for the compressors themselves, the ideal solution is to close them in. J. mentioned that there are special steel panels with interiors perforated to absorb sound. J. recommends steel panels because its important to have a good seal. Given that these are air compressors, they have to be somewhat open to the atmosphere. Here, J. recommends louvers pointed to the sides. Another option is to hang sound curtains about the compressors. Sound curtains, which come in different weights, are designed to absorb sound.
If the dealership doesn't take pity upon our sensitive ears, we'll have to deal with the sounds at a distance. J. asked if we were concerned about hearing the sounds in the house or hearing the sounds while outside. "Ummmmm," I ummmed. "Both?"

For dealing with sound outside, it's important to break that line of sight in the proper way. Building a fence is a possible way, but it has to be solid. A traditional plank fence will only reduce the sound minimally because of gaps. The ideal situation is to build a concrete wall with concrete blocks with a surface designed to absorb the sound. A reflective surface would bounce the sound back at the dealership's steel building and then bounce in back into our yard. J. says these special blocks are only 10 to 20 percent more expensive than standard blocks. And since we plan to put a garage back there, they can be be part of that structure.

So how do you keep sound out of your house? According to J., don't have any windows. Houses, of course, have to have windows unless you happen to be a vampire. One choice is to not have any windows in the direction of the sound source. That's a possibility at our place, although the sun wouldn't be able to kiss us in the morning. And we like to smooch the sun in the morn.

Typical windows are terrible at keeping sound out, even double and triple paned windows. Jack says that the narrow air gaps are great at transferring low and high sound frequencies. To avoid that transfer, you need at least a two to four inch gap! But fear not, there is a special kind of window made with laminated glass, the same kind of glass in your car's windshield. Laminated glass has two pieces of glass with clear rubber between them. In automobiles, this rubber serves to keep the glass from spewing all the place in a wreck and cutting your whiskers off. For a house window, it serves to dampen all the frequencies. And they come double paned.

Jack noted that it's important to think about the location of vents. Vents need to be vented where they are not facing the sound source. This not only includes roof vents, but also dryer vents and air vents.
So where do we go from here? We'll work with the architect to design the house to "respect" the rear of the lot. We'll also, at some point, go talk to the dealership to see what they're willing to do. An enclosure will probably require a variance from the city since the compressors are within the setback.

Silencers are golden.
Posted by bubba of the bubbles at 1:03 PM