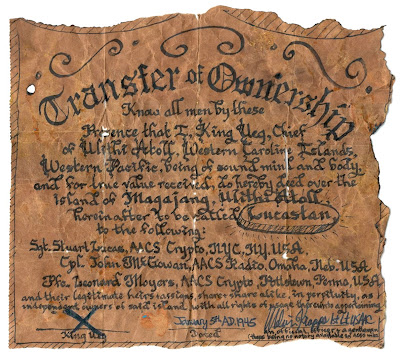 One enemy of modern architecture is the dreaded deed restriction. A deed restriction is a little goodie attached to the deed of the property, with or without a house, that dictates what you can or can’t do with the property. On one hand, this can be a good thing. It ensures an apartment building or gas station or business doesn’t get built or moves in right next to you. However, it can be a real mood killer if you want to build modern. For example, consider a lot we drooled over in the hills of northwest Austin. After reading through an inch-and-a-half thick stack of paperwork titled “Restrictions”, we discovered several items that were ultimately unworkable for us.

In the past, the neighborhood association had to approve your building plans. Given the standard architecture in the hood, it would have been highly unlikely that they would have approved a blocky, flat-roofed modern with lots of windows and steel. In short, our house would have been designed by committee. Yuck. We all know what comes out of committees… Fortunately, that provision had been removed several years ago. However, there were restrictions on the outside materials, the color of those materials (which explained the bland sameness of color up and down the street), and the configuration of the yard and whatever sat on the yard (posing potential problems for rainwater harvesting). Anything you did outside that upset a single neighbor could turn into the Spanish Inquisition.

More troubling were the building restrictions posed by the city on the lot. The lot was going to be a challenge to build on. Grade started at the curb at four feet above street level and wandered up from there to the back of the lot. Given the grade issues, it would make sense to place the driveway and garage on the western side of the lot where the slope was more gradual and there was more room to place a drive. However, the city had placed several restrictions on the lot that makes it impossible to build on without variances. First, the city required that any cut in the limestone could not be any greater than 4 feet deep. Second, the city required that the grade of the driveway be no smaller than 1 foot rise (or fall) per 10 feet of length. Third, the city required that the garage be 20 feet from the street. And fourth, the city required that the drive and garage be on the eastern side of this particular lot. Given those restrictions, it is impossible to build on the lot without a number of variances from the city. A friend in the neighborhood confirmed that the lot had gone unsold for many years because no one had figured out how to build on it. At first glance, after a hike about the property, I didn’t understand why. After reading the deed restrictions, it became real clear.

Yes, it’s possible to get variances from the city, but that adds time and cost, not to mention no guarantee of success. That, combined with color and yard restrictions (and the lack of western exposure to enjoy sunsets), caused us to bid ado to this little piece of hillside heaven. Furthermore, a previous owner, way back when during the days preceding prohibition, put a deed restriction on the property disallowing the brewing of beer. Not that I'm a brewer, but what if I wanted to?
Posted by bubba of the bubbles at 10:58 AM