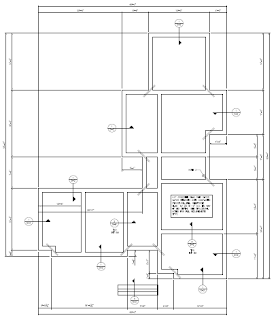 Been a busy week for my working and non-working lives, so very little time to blog (I still haven't finished with L.A.!). But we've reached a milestone: (near) completion of the bid set, the set of the construction documents that are hard biddable! To commemorate this milestone, we had a meeting with the architects and the builder this past Friday to pass the bidset to the builder (autocorrect changed "bidset" to "bidet". Now THAT would have been a real interesting meeting!).

The bidset includes a number of things we hadn't seen before, including:


So next steps: Wait for the builder to get back to us in two weeks (which prompted a side philosophical discussion on why two weeks always seems like a good time frame: Far enough away to procrastinate but not so far away to cause someone concern they're getting put off...).

In other news, we've signed up an interior designer to help us on making choices on (1) countertops, (2) backsplashes, (3) isthmus pendants, (4) tile, (5) what flavor of white paint to use (really), and now, probably, (5) wood. Hope to meet with her to discuss in, you guessed it: Two weeks!
Posted by bubba of the bubbles at 10:21 PM