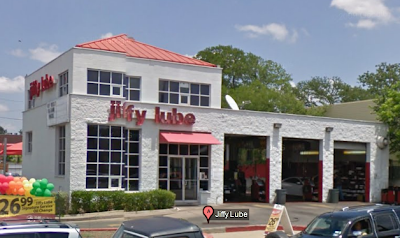 We've lived in Austin now for almost 20 years. Back in the latter part of last century circa 1992, we bought an old and adorable house in central Austin. The main part of the house, built in the 1890s by a fellow from New Orleans, is actually a board-and-batten shot gun shack, so named because you could shoot a shotgun clear through the house and not hit a wall. The house was expanded to its present 1,100 square-feet by 1910 or so. Eleven-foot tall ceilings, 10-foot tall windows, and bucketloads of quaint have made it a joyful place to live.

However, it is a little cozy (house guests = nope), closet space is at a premium (and not even the width of a modern day coat hanger), and, over the years, we've fallen cowboy hat over cowboy boots in love with blocky modern (is it the Italian in he and the German in she?).

This cube lust started over a decade ago with the new Jiffy Lube around the corner, a place to get your oil changed in a jiffy! It is very blocky, has storefront windows and doors (after all, it is a store...), has three bays for cars to roll in and out, and is crowned with a second story office adorned with dark square windows.

"Wow!" I said one day to my bride-to-be, "wouldn't it be cool to convert that place into a house and live there? Big open kitchen-dining-living open to all sides, a rooftop deck, big closets."

It was at that moment I realized that we were architecturally compatible. I married her.

It wasn't until years later, tempted by a subscription to Dwell and various home tours, that cube lust struck. This is our story...
Posted by bubba of the bubbles at 8:24 PM No comments: Links to this post Well hello! Welcome to our blog of us maybe-possibly-hopefully-someday building a modern (as in cubist and minimal) home! The purpose of this blog is to document our adventures and heartbreak for our own later reference and, perhaps, for you if you embark on a similar adventure. No promises of consummation: This whole affair could end in heartbreak and/or financial ruin. You have been warned.

One of us is a scientist and the other an engineer, so we tend to be hyper analytical and comfortable with databases and numbers. Although we don't sound like much fun at a party, one of us is also somewhat artistic and the other an animal lover and quietly fiery. In other words, if Spock and Kirk mated and had children, we would be them (a disturbing thought on many different levels...). Oh! And we want to live in a cubist house! This is our story…

Posted by bubba of the bubbles at 8:23 PM No comments: Links to this post