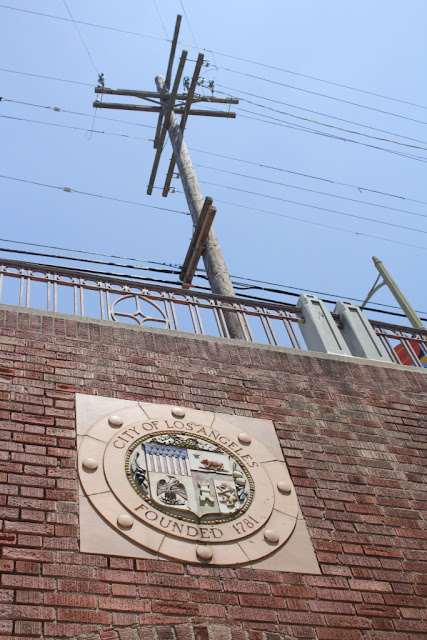 My watery profession brought me to Los Angeles which offered us an opportunity to come out a few days early to gawk and gander at the architectural jewels of the area. And my oh my there are many angels (and angles) in this city of angels! Los Angeles was, and is, a quiet architectural center. Several key historical Modern houses are in the area (the Schindler house, thought by some to be the first Modern house; Schindler's Lovell Beach House; and Neutra's Lovell Health House) as well as modern Modern masterpieces.

Our itinerary looked liked this:

day 1: Venice beach to gawk at some Gehrys as well as an Irving Gill and then into town to gawk at a Frank Lloyd Wright and some Schindlers and a Gregory Ain.

day 2: Gehry in the morning and evening and a happenchance tour of three Schindlers.

day 3: Buy a Fafi print, gawk at Lautner’s Malin House, tour the Neutra VDL house and Wright's Hollyhock, gawk at some Schindlers from the street and have dinner at Richard Meier's Getty Center

day ?: Before I come home, I may be able to invest some time to gawk at some more houses in the Silver Lake area. We shall see...

We told Architect 2d that we were going on this trip. He said that architects have a saying that the worst thing that could happen to them is for a client to visit Italy towards the end of drawing production because they'll return wanting to Italianize everything. He said the second worse thing would be visiting L.A.! However, I think he was joking.