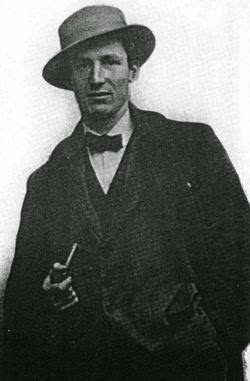 Part Sant-Elia in a multi-part series!

Antonio Sant-Elia was an Italian architect and early (and now the most remembered) adherent of  Futurism, an avant-garde movement started in Italy by the poet Filippo Tommaso Marinetti in 1909. Between 1912 and 1914 Sant-Elia drew hundreds of futurist impressions for a Città Nuova ("New City") that is remarkable in predicting the general architectural setting of cities today. He presented the drawings at a show of the Nuove Tendenze group in May/June of 1914. Later that same year he authored* a manifesto titled Futurist Architecture that starts like this:

No architecture has existed since 1700. A moronic mixture of the most various stylistic elements used to mask the skeletons of modern houses is called modern architecture. The new beauty of cement and iron are profaned by the superimposition of motley decorative incrustations that cannot be justified either by constructive necessity or by our (modern) taste, and whose origins are in Egyptian, Indian or Byzantine antiquity and in that idiotic flowering of stupidity and impotence that took the name of neoclassicism.

He might not have been a whole lot of fun to drink espresso with...

Inspired in part by Adolf Loos' premise that ornamentation is crime, Sant-Elia stripped most ornamentation off his perspectives, revealing the bustling and efficient cities beneath, naked yet beautifully exposed. In a radical interpretation of shedding the previous generation's architecture, Sant-Elia envisioned each generation building their own city with their own architecture (something we see today in the slow but inexorably constant renewal in the footprints of our current cities, at least in the United States).

He joined the army in 1915 when World War I started and sadly perished in late 1916 in a battle at Monfalcone, Italy, leaving behind few built works. He was a mere 28 years old at his death.

Futurism later became associated with Italian Fascism when Marinetta merged his Futurist political party with Mussolini's Fascists in 1919. Several Futurist buildings were erected at that time, but the Fascists, including those in Germany, ultimately preferred a futuristic interpretation of Roman imperialistic architecture.

* There's some debate over exactly who wrote the manifesto, with some suggesting it was F.T. Marinetti, the founder of Futurism. However, Marinetti was a poet rather than an architect, and it is Sant'Elia's name on the document, not Marinetti. 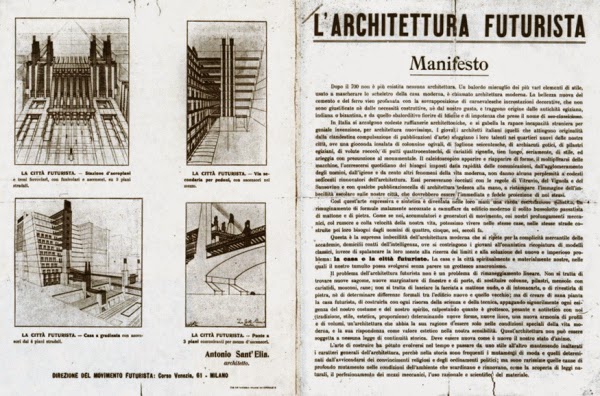 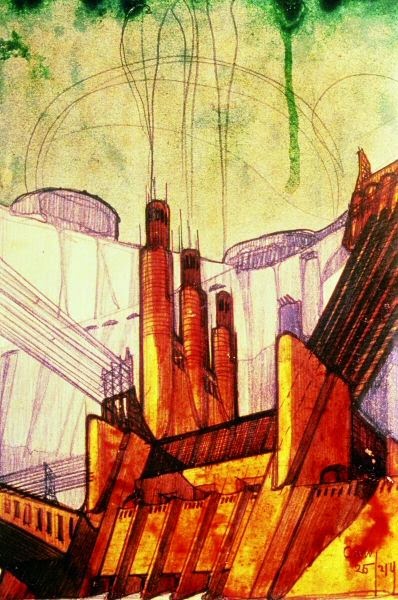 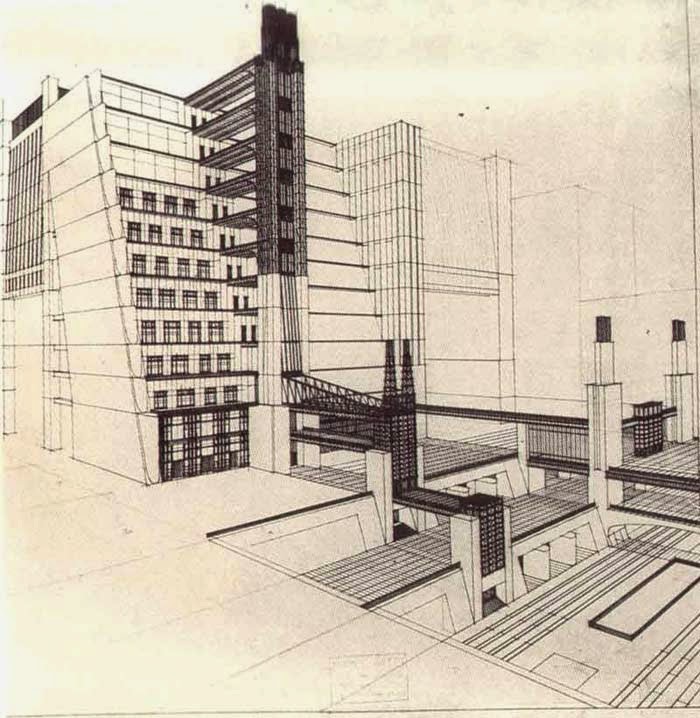 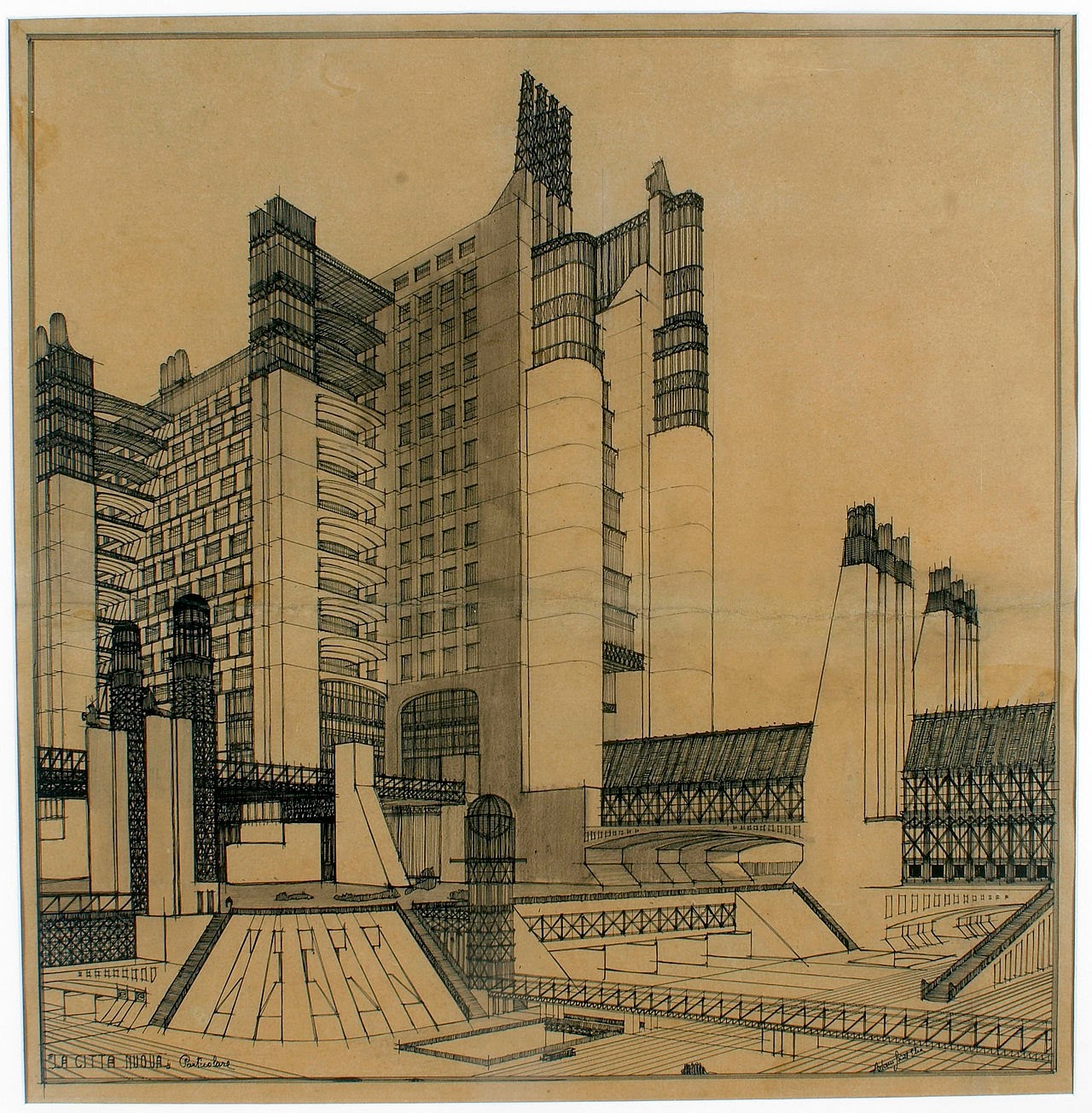 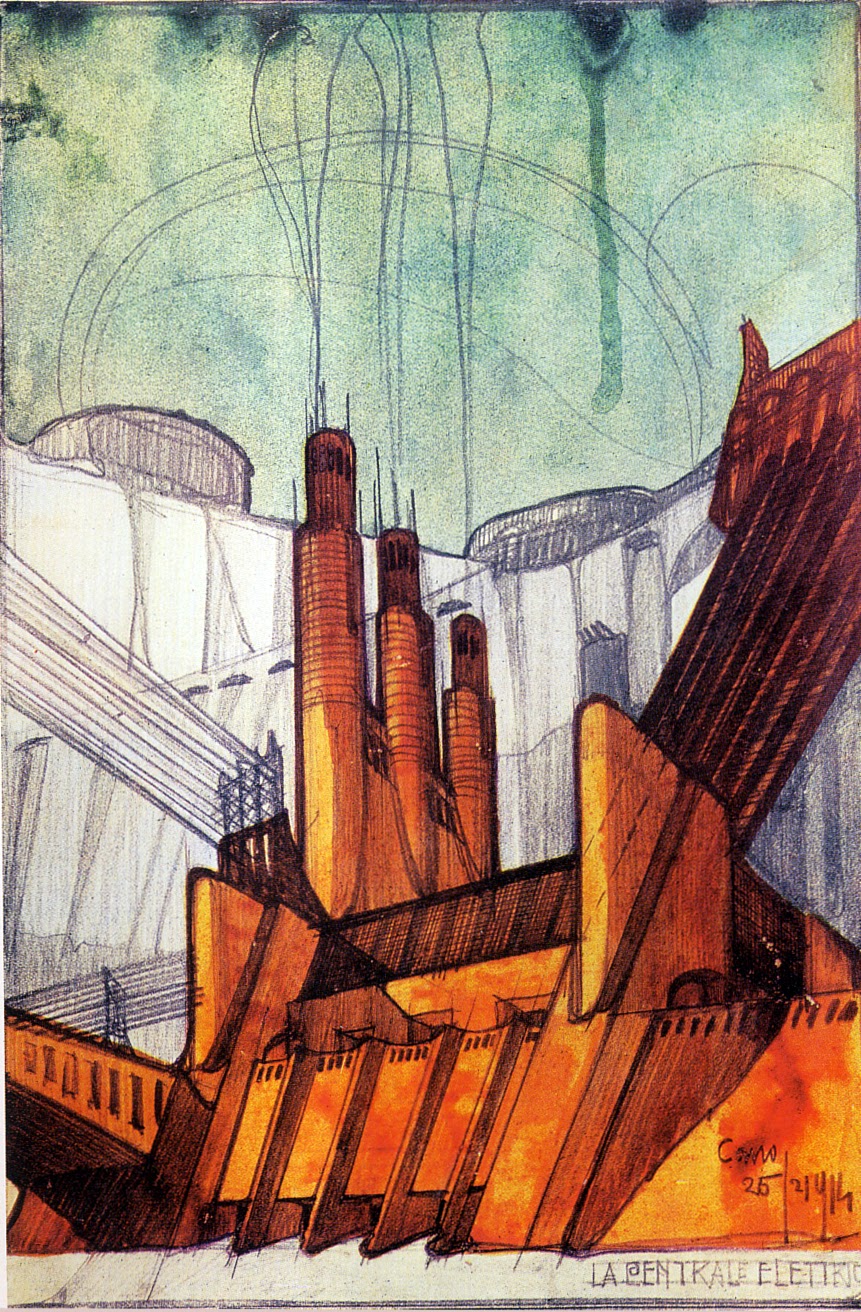 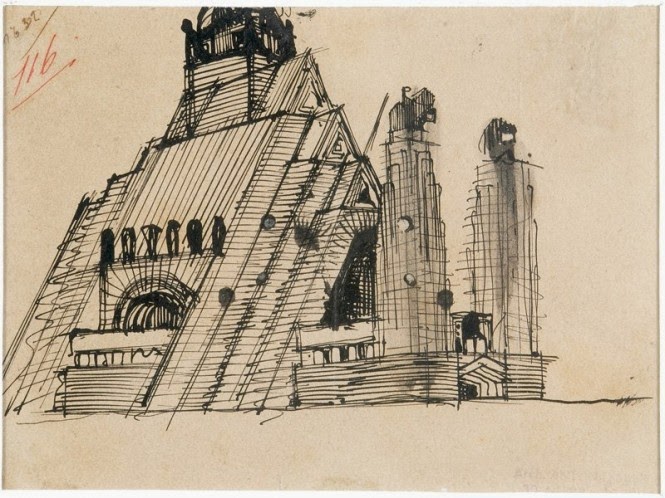 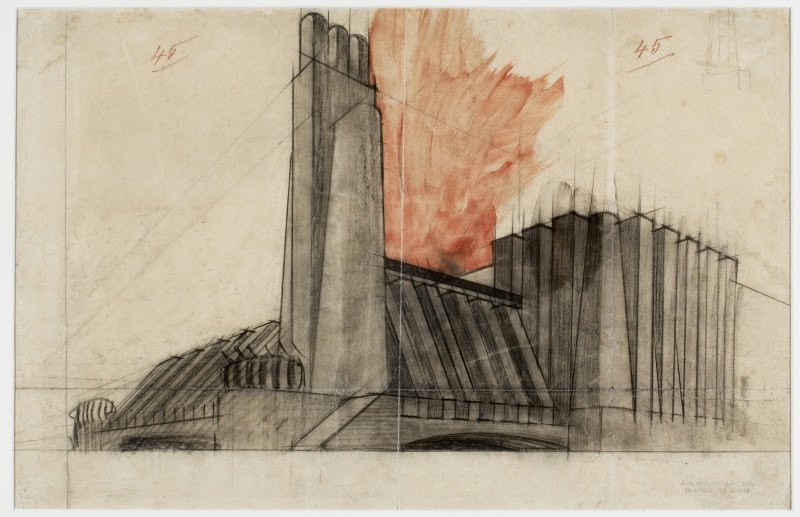 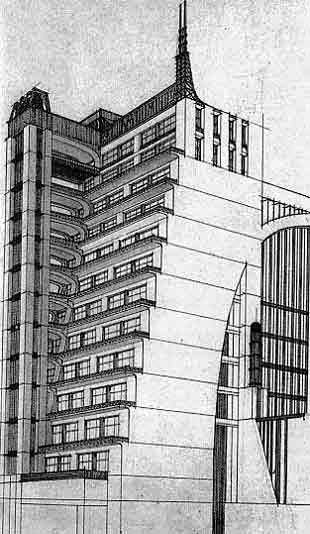 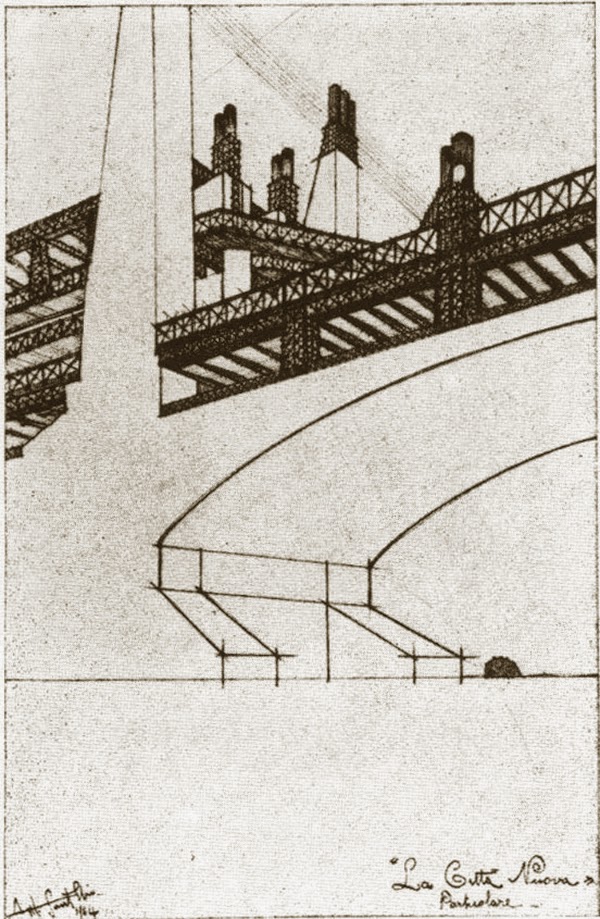 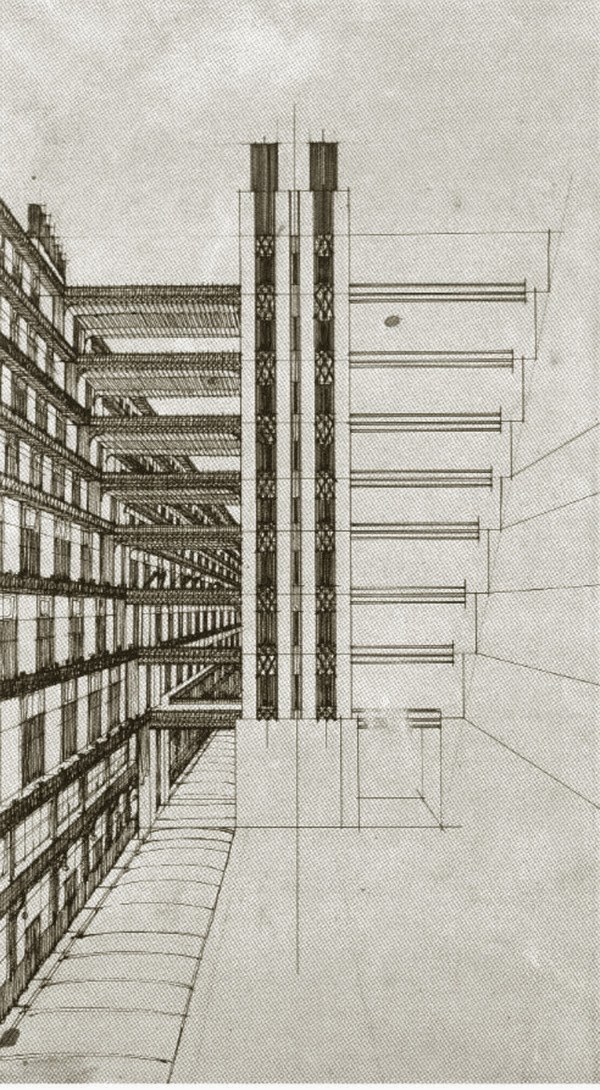 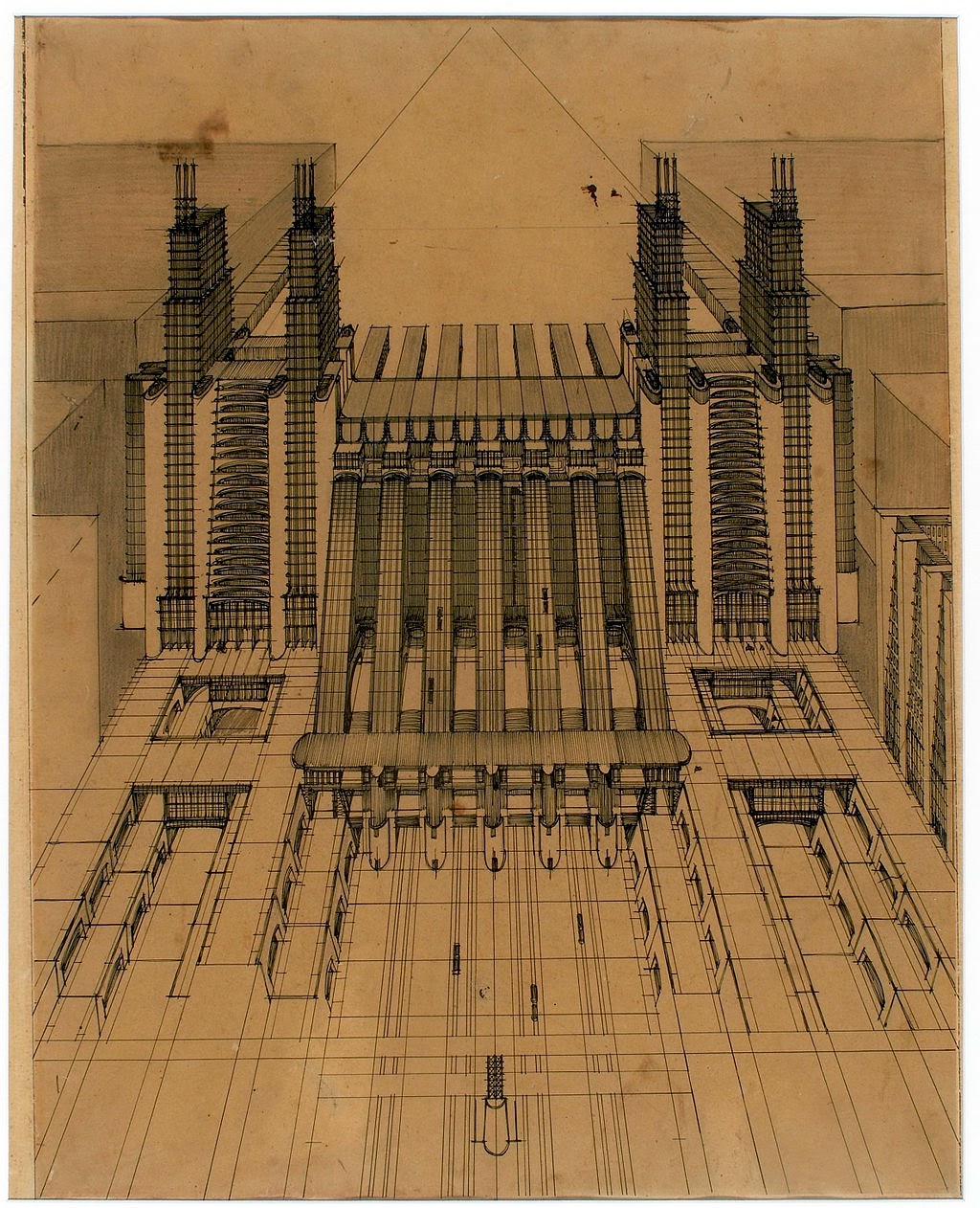 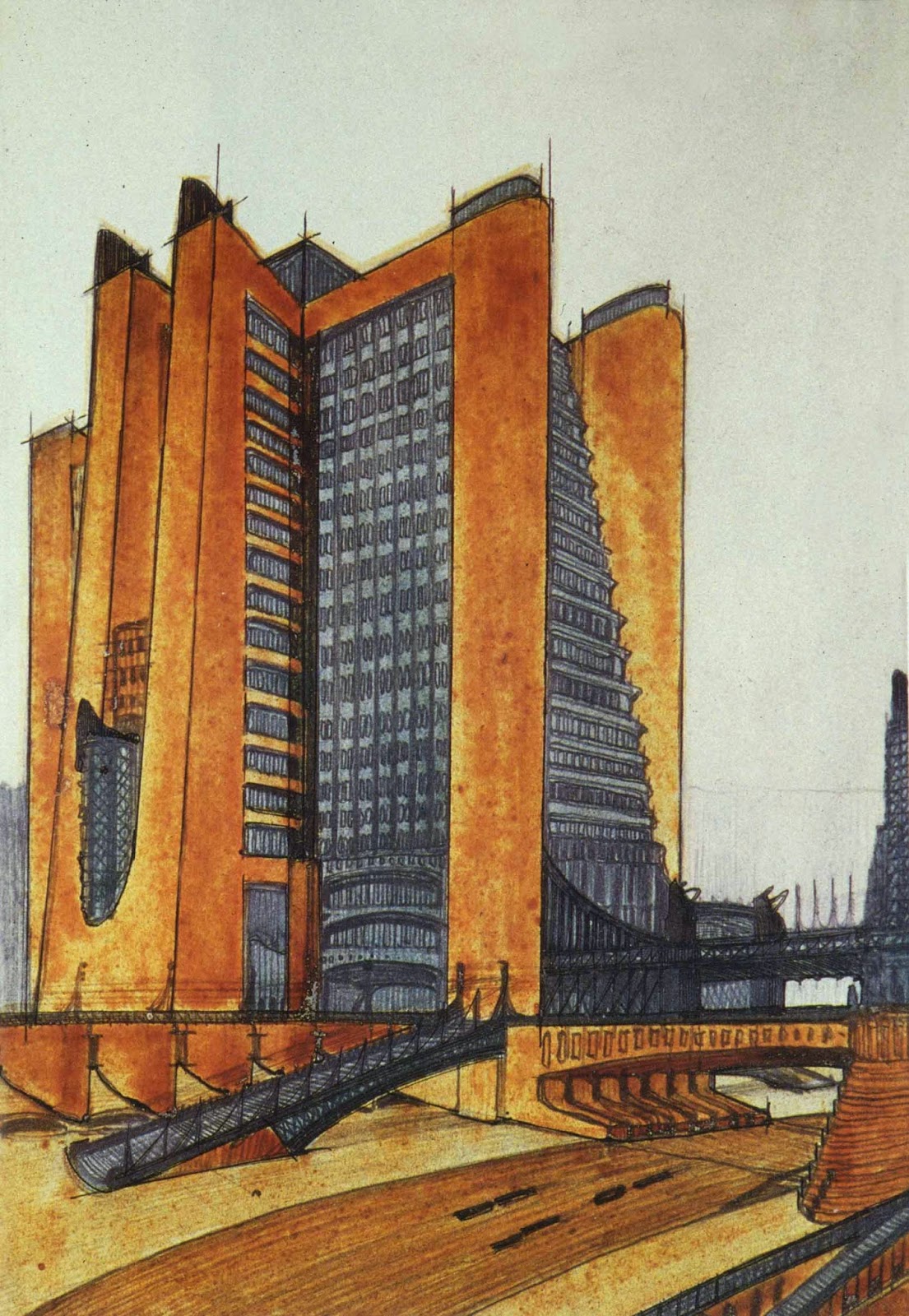 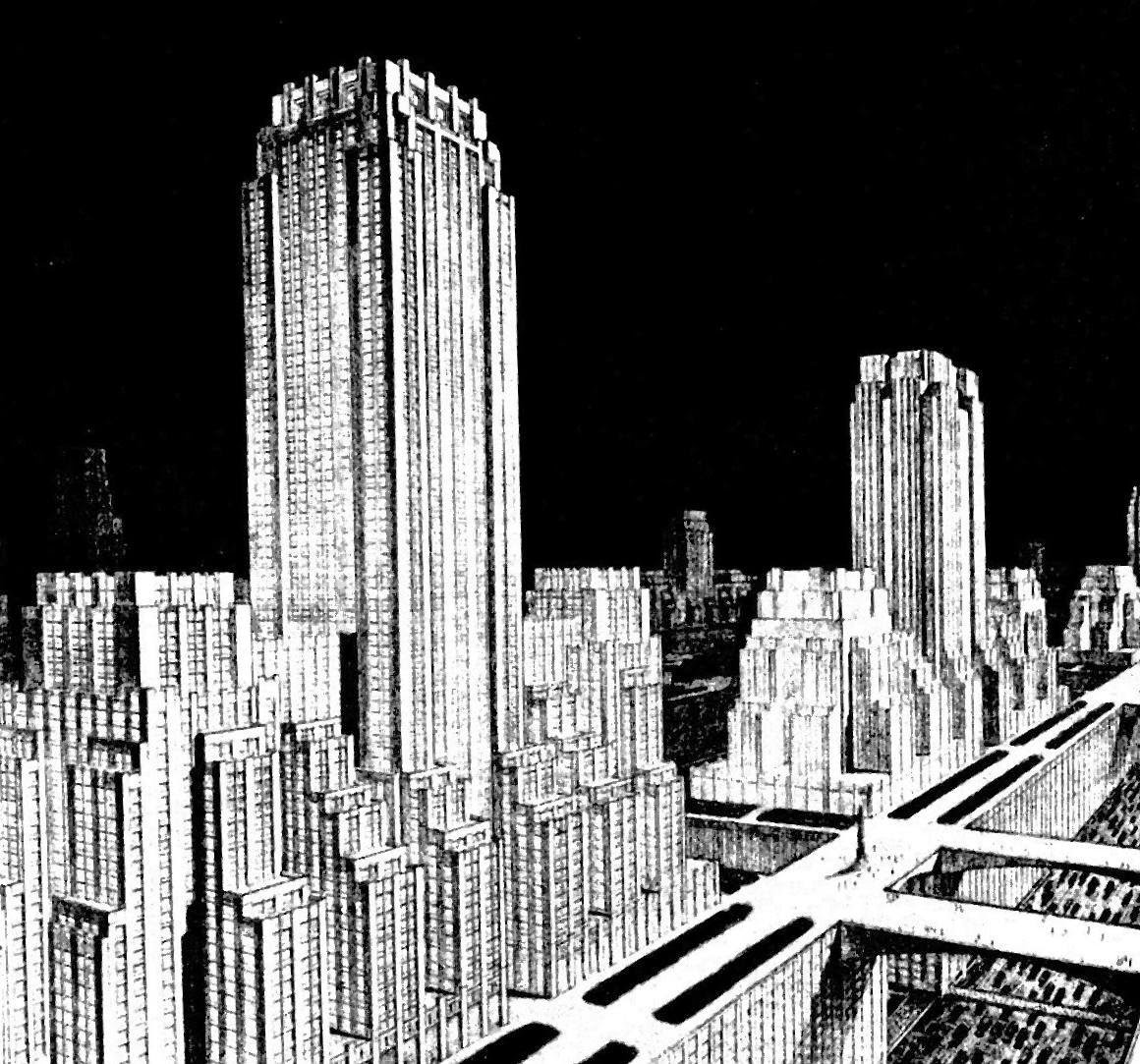 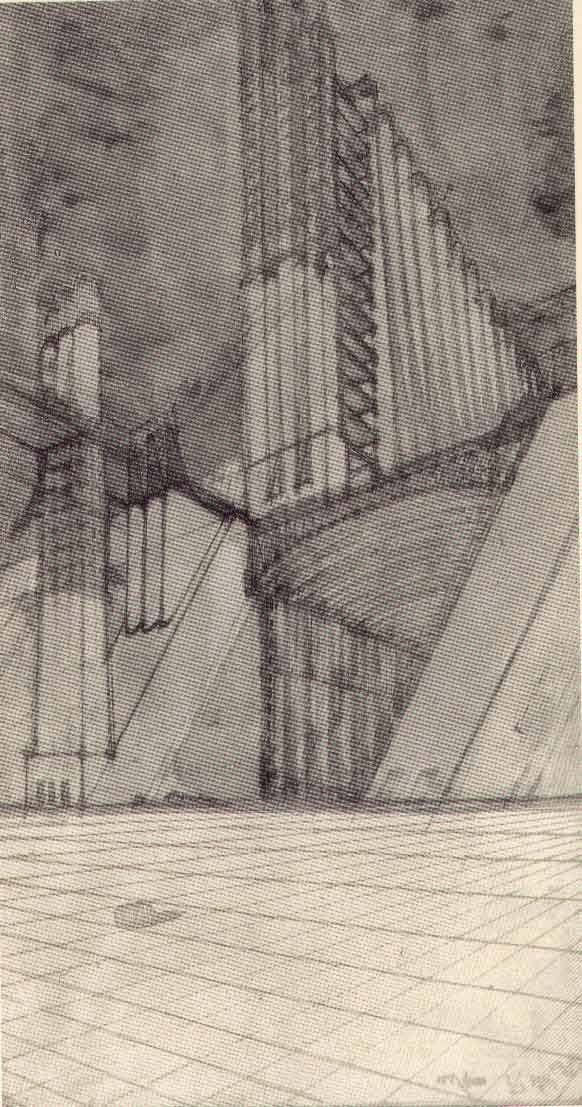 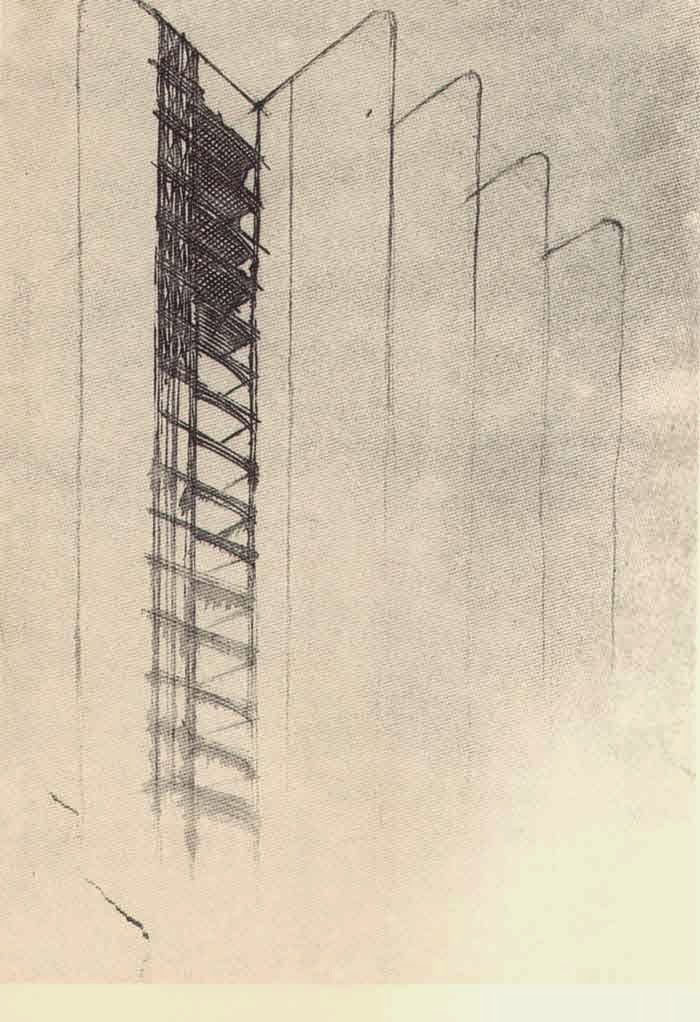 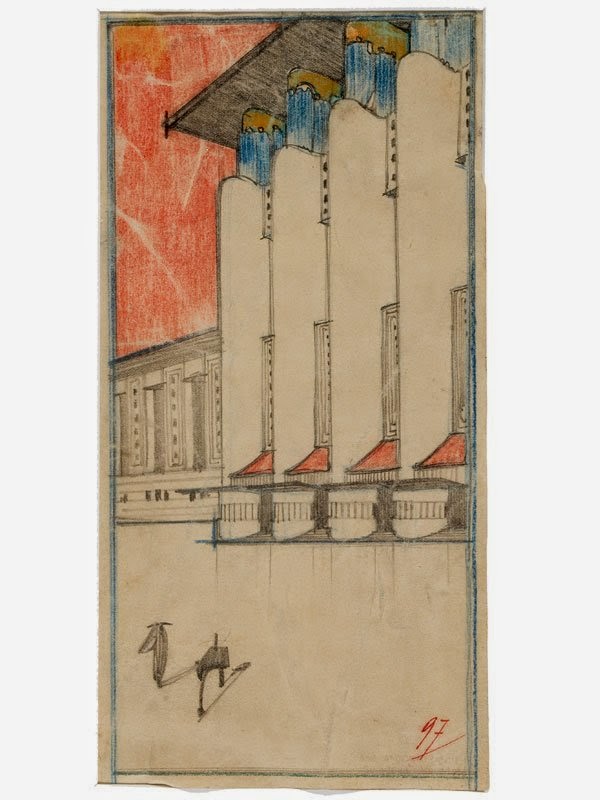 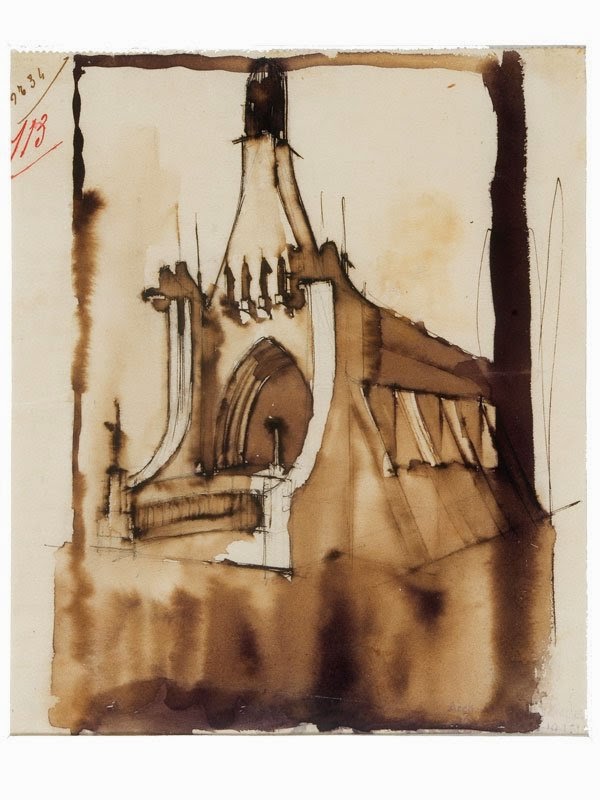 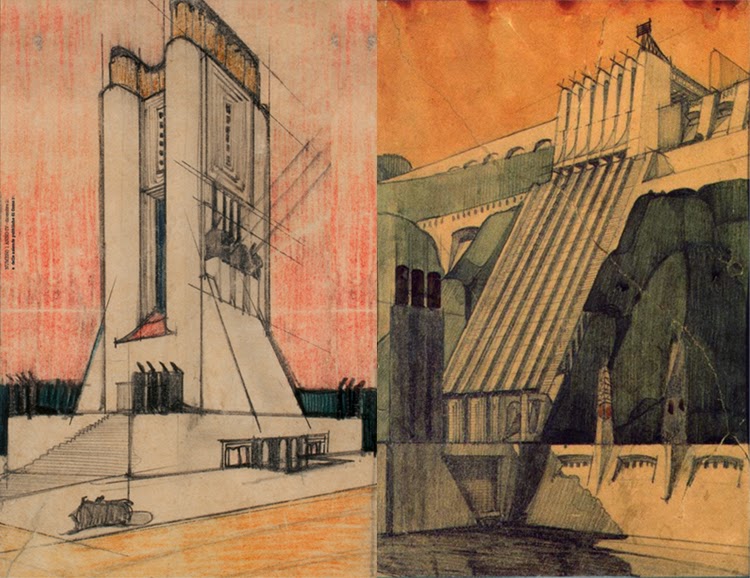 Below is a monument to Italy's WWI dead strongly inspired by Sant'Elia's visions of the future (see image immediately above). A fitting tribute to a man who predicted the future but didn't live to see much of it. 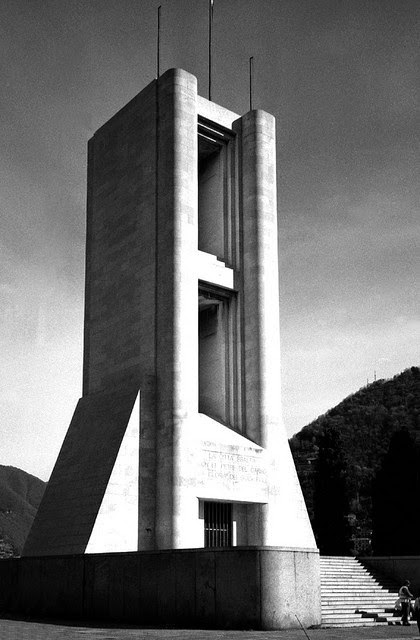 Posted by bubba of the bubbles at 9:39 AM