What is Modern? 4. Embracing the environment

A writer for the local newspaper recently exclaimed with glee that a contemporary home, unlike unfiltered Modernism, embraces the outdoors. This “radical” contemporary house dared to show greenery through its ample windows, the author inferring that this is something that would be frowned upon by Modernism. Modernism, it seems, requires an Agent Oranging of any landscape viewable from a window. I bet the neighbors would love that...

This could not be farther from the truth. In fact, it was Modernism that introduced the very concept of embracing nature herself in architecture.

Different architects had (have) different views of how you embrace nature with architecture. Le Corbusier tended to put Mother Nature on a pedestal by putting his houses on stilts and framing nature through windows. Frank Lloyd Wright, on the other hand, was on top of Mother Nature in the grass trying to snake his tongue down her throat. 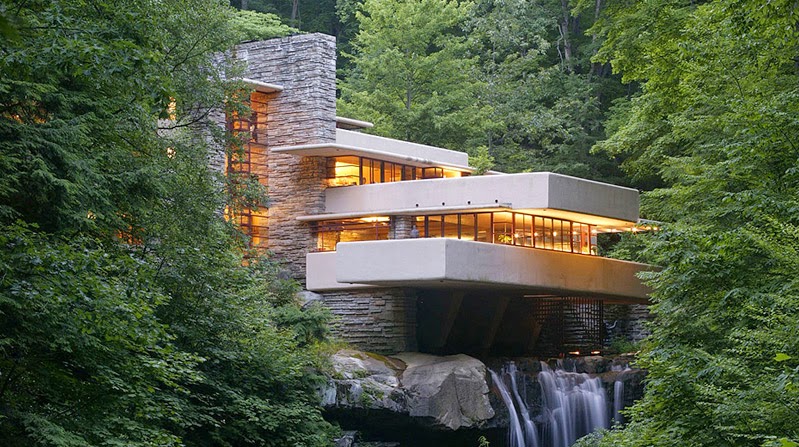 Wright preached the need to embrace the site—its topography, its weather, its geology, its views, its faults—when designing a building. He’s famous for saying “of the hill, not on the hill”; in other words, it’s best to integrate your architecture with nature, not have your architecture dominate the landscape. Wright even worked to have his designs evoke the geography. For example, his Prairie Style houses from the 1890s through the 1930s are meant, through their long horizontal lines, to evoke the flat, glacial-planed prairies of the Midwest. The sandy, gently peaked, and asymmetric roofs at Taliesen West are meant to echo the nearby desert mountains. And his sharply peaked roofs for his Rocky Mountains work ape the mountains themselves.

Corbusier wasn’t about fitting into nature as he was with nature fitting in with his designs (and to be honest, Wright was in this same place until later in his career). Corbusier designed ample patios for outdoor usage and gaps in walls to frame the outdoors as art. His ribbon windows allowed a constant internal visual connection to nature just outside. One house he designed and built even had motorized bushes that could be moved at the press of the button to admire the Paris skyline.

Inspired by a camping trip to Yosemite and the generally pleasant Southern California climate, Schindler was the first to completely remove the boundary between indoors and outdoors in the duplex he designed for himself, his wife, and his friends, the Chaces. Built in 1922, the Schindler-Chace House remarkably set the stage for California Modern (and perhaps is the first Modern house ever realized). On the public sides, his house has private, tilt-wall concrete façades. Behind those façades are walls of windows and large sliding doors that allow a seamless transition between indoors and outdoors, both visually and functionally. Frank Lloyd Wright and many others adopted this intimacy of indoor and outdoor living into their own architecture. The picture window, itself a bastardization of Modernism's wall of windows, can be traced to Schindler's house. 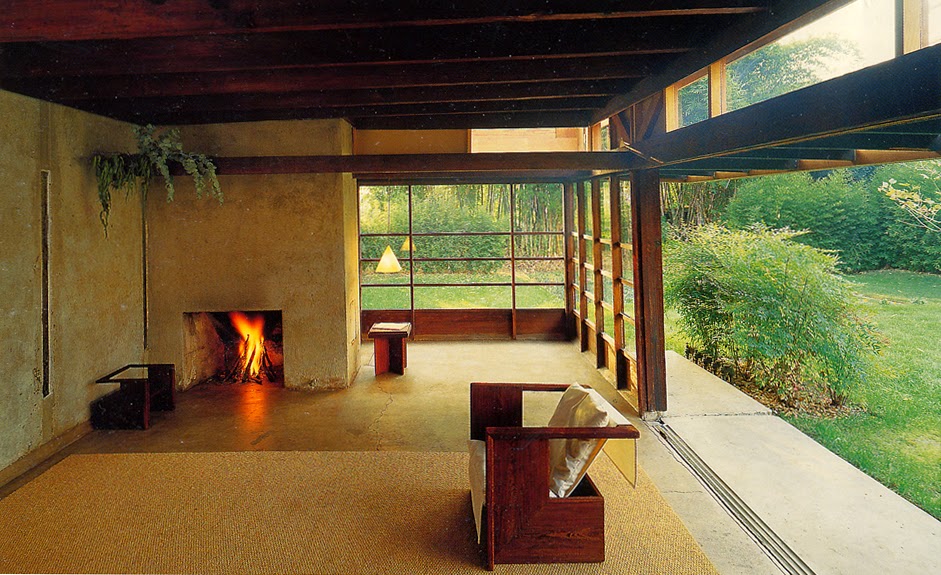 R.M. Schindler "going camping" by dissolving indoors and outdoors in the Schindler-Chace House (1921-1922).

A more recent way Modernism has embraced the environment is through green building. Building green can achieve a number of goals, including minimizing the cost of building and living in a home to minimizing a home’s footprint for broader environmental and social goals.
Posted by bubba of the bubbles at 9:47 AM