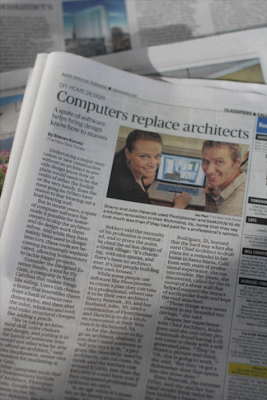 An article published in today's Austin American-Statesman, originally pubbed in The New York Times [which seems to be a longer version], is sure to raise the hairs on the necks of architects everywhere. Under the headline "Computers Replace Architects", the article discusses software out there that allows layfolks to design their own homes. Architects are no longer needed! Press a few buttons, and you're Frank Lloyd Wright (goofy cape not included)!

Several friends strongly suggested that I design our home because "We know you can!" And although I certainly could design a house (or think I could design a house; lord knows I've read enough about it...), I know that I shouldn't because I couldn't design a fabulous, or even a good, house. Yes, I've dabbled in house design with SketchUp, but I did that for fun on a lot we abandoned and to get a better understanding on the plight of the architect, namely the balancing of efficiency, cost, quality of life, and aesthetics (among many other items). It's easy to plop down the rooms you need, hook 'em all together, and clink the champagne glasses. It's much harder to do it well and in what results in a beautiful and efficient space, both inside and out. In fact, unless you are an unusual talent, I would say it's nearly impossible.

There are some quotes in the article that are going to ruin several architects' day today. This one is egregious: You don't need an architect to tell you "that onyx is in" [confusing architects with interior designers, perhaps?]. The author goes on to state that not using an architect lowers the cost of a remodeled kitchen from between $30,000 and $40,000 to $7,000. Say what?

Jereon Bekkers, a turncoat architect from the land of the wooden shoes and biased hawker of design software for Jane and John Doe, states that the necessity of the architectural profession is overstated. As evidence, he points to quaint Greek villages built without architects. However, that architecture was developed and refined over a thousand years. Because it's refined mono-architecture, all someone has to do is copy what their neighbors have done. The lessons have been learned and the mistakes removed in a long-term architectural evolutionary process. Where does that exist in the modern world except in the architectural profession?

If you're designing your own house, more power to you. You certainly (hopefully...) gain some financial benefits (no architect fee), at least in the short haul. But I think you also lose out on the benefits of turning your project into something truly special that surely results in greater value, both in quality of life and hard cash during resale, down the line. As long you find a good architect!

Side note: The New York Times version of the article discusses how architects aren't keen on clients using design software even when working with an architect because clients tend to cling to what they designed. Knowing my own propensity for this, I purposely stayed away from any personal design work on our house. Sure, I thought about how the house might relate to the lot and the street, but ultimately I stepped way (way) back to let the architects architect. This design-clinging is even a struggle with architects (it must be human nature...); they are (hopefully) trained to step away from initial ideas to investigate other possibilities to ensure that they've arrived at the best solution. In fact, this very thing happened with our present design. 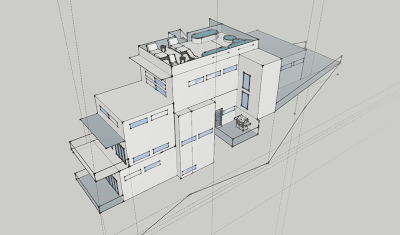 (House I "designed" for the cliff lot. Corbu would be proud!)
Posted by bubba of the bubbles at 9:31 AM