sketch your house in SketchUp! 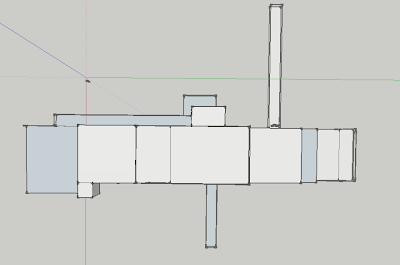 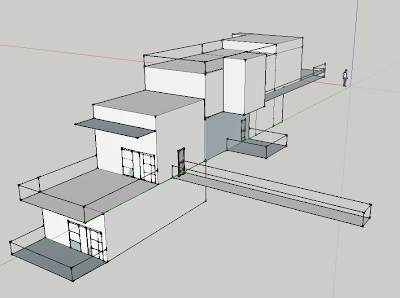 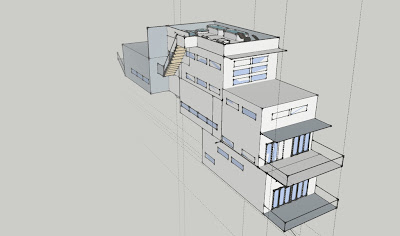 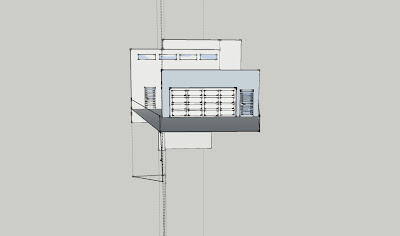 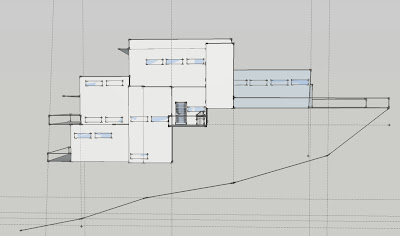 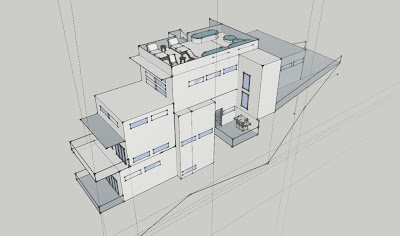 SketchUp is a badass 3D modeling program initially developed by @last software, later bought and now maintained by Google. It’s badass because it’s (a) badass and (b) free. That’s right, FREE! And while free is oftentimes cheesy, especially in 3D modeling, this program is pretty sophisticated and, based on my review of various architectural blogs, it’s used quite a bit in the industry (there is a pay-for-pro version). The other badass aspects of SketchUp are that (c) it has a realtively short learning curve and (d) it’s available for both Windows and Mac platforms. Furthermore, 3D models of furniture, cars, people, and other stuff are crowdsourced, so there’s a lot of stuff out there already put together and ready to plop into designs.

I learned and used SketchUp when we were considering a lot in northwest Austin, a lot we called the “Cliff Lot”. The Cliff Lot had a great deal of topography, was fully tree’d, and was bounded on three sides by drainage. A jump off the edge of the lot combined with one to two days of exposure (depending on when the coyotes arrived) would fulfill your suicidal ambitions.

We were (probably) one counter offer from being under contract when the neighbor took a small bulldozer to the lot to cut a path through trees, into the hill side, and across a city-recognized drainage to get to his back yard (he was hauling a bunch of limestone block back there for a major landscaping project). The lot-owner was unusually (suspiciously?) calm when all this was revealed and tried to convince us that the unsilt-screened landmoving and tree removal shouldn’t be a problem for us or the city. When we said that was fine but we wanted to have the city come out to verify that there weren’t any code violations we would be inheriting, the owner said no, so bye-bye lot. Soon after I discovered SketchUp and thought “What the heck: I’ll design a house for that lot!”

Part of the purpose for doing this was to (1) learn SketchUp, (2) get an understanding of how much space we might need in a new home, and (3) get a more detailed appreciation for what it is that architects do. And I have to say, it was a hoot!

The first thing I did after I got serious was figure out the floorplan. Because of the topography (the lot falls off from the street) I knew the garage “had to be” off street level. After that, it was waterfalling the house down the grade of the lot. The middle part of the house, grade-wise, contains the public areas (kitchen-dining-living-0.5 bath); the upper part holds two bedrooms and an open office-library; and the bottom holds the master suite. I’ve also included an image of an earlier version that I put together without the benefit of a floorplan. I put that “gangplank” in there, suspended in air, to be able to literally walk out into the trees (10 to 20 feet up into the air). Saw later that Wright did something similar at Taliesan East (and here I thought I was being creative…).

I have to confess that I haven’t use the software since, in large part to let the expert do what the expert is supposed to do (The Architect had free reign on the floorplan and massing as dictated by the program on the current lot). Nonetheless, having danced with design on a lot we weren’t going to build on helped me understand and appreciate the symphony an architect has to direct to get all the pieces to effortlessly work together. I am, by no means, suggesting I succeeded in directing that symphony with this effort; if anything, my effort is a cacophony of kazoos! But it felt good to wave the wands and create something out of thin air…

Posted by bubba of the bubbles at 9:40 AM