haiku for the *documentary* "Schindler's Houses" by Heinz Emigholz 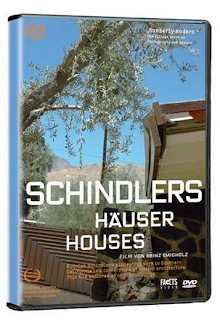 Germans with lenses
can we film your Schindler house?
no sprechen English...

The Schindler debauchery has hit a new low: A DVD of Schindler structures (and little else). This is an odd little 90-minute video. Although I called it a documentary, it isn't, really, although it does document 40 of Schindler's works. After an opening scene of a Los Angeles corner with a hidden Schindler and a bizarre self-stroking opening statement by the director, the doc is simply slightly angled lingering fixed video (the camera is fixed; no panning, no camera movement) of the outsides and, blissfully in some cases, the insides of various Schindler works as they were in 2006. No words. No music. No information. No historical photos. There are the ambient sounds of the locations (a car driving by, a dog barking, wind chimes), but literally nothing else.

Yet it's a brilliant way to portray architecture. Emigholz knows just how long to leave the camera on a particular spot to allow the eye to wander about a focal point and savor and enjoy. I wish he had been able to needle his way inside more of the houses (I was hopeful but alas disappointed concerning the Lovell Beach House...), but those he was able to get inside and film are worthwhile. Architects often talk of blurring the distinction between indoors and outdoors. Schindler blurred the lines not just with outdoor-indoor space, but with the architecture itself, pulling the outer walls and design elements into the house.

Ultimately, this video is only for those of us helplessly inflicted with Schindleritis.

A sample of the video on the Youtubes.

Mr. Emigholz also has other videos, including one of Loos, a major influence on R.M. Schindler.

Posted by bubba of the bubbles at 6:16 PM