its what's on the inside that counts

Met with the interior designer this past Thursday evening to go over lighting and tile choices. We've made some choices, but we've been struggling with peninsula lights (lights over the kitchen "island"), tile for the bathrooms and kitchen, and recent concerns about the art lights being too busy for the ceiling in parts of the house.

We had a good meeting. We steered her toward The Chosen Ones to give her a sense of our aesthetic for the house, and she pretty much had it nailed. Preliminary (subject to change...) choices we made:
The tile we're looking at is NeosTile by Happy Floors (hee! hee!). Like the dimensions and colors. Probably chalk on the walls with silver-grey behind the tub and on the floor of the shower (and perhaps running up the beauty bench and back wall of the shower?). They are greenish in that they are made with 40 percent recycled materials.

Don't know about price yet, so we shall see. Green sometimes means more green. The good thing about the designer is that she can get materials at wholesale prices and then passes most of the savings on to her clients. That would be nice... Still need to decide on the pattern said tiles would be laid. Decisions upon decisions upon decisions...

We talked about countertop material. Our counter default so far has been either Caesarstone Quartz Reflections:

(it's cool because it has little mirrors in it, but the brownness in it is bothering me a bit...) or Silestone Signus:

to evoke the concrete floors. The designer showed us a new style by Caesarstone called Supremo, which is grey and cellular (and kinda cool):

Our first love is White Diamond by Eco (by Cosentino):

However, Consumer Reports noted that placing a real hot pan on it can crack it. We don't place hot pans on countertops, even when we had concrete, so perhaps this is not an issue for us? Especially when this is our aesthetic first love?

After more pondering, we thinks we're going to go for a whiter countertop material (heard a speech by Peter Pfeiffer, local green guru, where he recommends light countertops for passive lighting reasons).

For the kitchen backsplash, the architects recommend a smaller scale tile. Not that we have to listen to the architects, but we do listen (obey is another matter!). Along those lines, we've decided we like the linear mosaic tile that is out there. As far as color, hmmm... We had one picked out for the Quartz Reflections (Geowhite from the Geotech Collection by inDesign by Interceramic; Geogrey shown below; not sure they make Geowhite anymore since it's not on the web page): 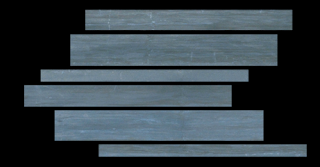 Dig that neoplastic pattern, baybee! However, the color choice (if it's still available) won't work (I don't think...) with a White Diamond countertop.

Here's something from DalTile (the preferred tile choice of Architect 1d) called EC1 that's rather hawt:

and even more deliciously neoplastic than the  Geotech stuff! (Hold on a second while I go find a towel to sop the drool from my chins... [sop sop sop] Thanks for waiting.) This tile also comes in 4" by 24" with 4" by 24" bullnose trim (something the NeoStile doesn't have). Hmmmm...
The bride has been concerned with the busyness of the IKEA art lights, and I've been concerned about the busyness of the IKEA art lights combined in close proximity with other lighting fixtures. For example, combining the IKEA art lights (two of 'em) with the bride's dining room table chandelier doesn't seem like a good idea. Ditto for the front entry. The designer confirmed these concerns, encouraging us to use concealed cans for the art lights. 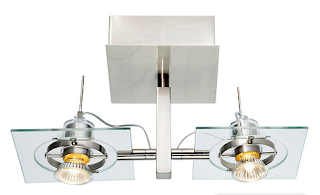 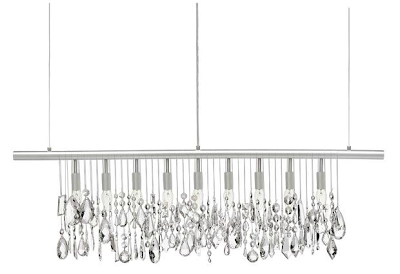 I think a blingful art light could work where there is no local ceiling competition, but the designer thinks  that artful lights can compete with the art (or maybe she doesn't like that IKEA art light!). Still thinking about that one...

The designer recommended that we include some uplights (something Peter Pfeiffer also recommends since cans only light down; lighting the ceiling lights the whole room with indirect light and makes the room feel bigger). She found a soopercool neoplastic uplight that I found out later (after Googling) retails for more than two grand (gulp). Still thinking about uplights and where they would go (dining room? stairwell?).

I love-love-love the PH5 Pendant by Louis Poulsen: 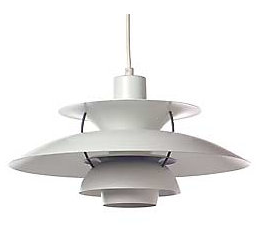 but feared (correctly) that it's too large for the peninsula. At 20 inches across (all of it beautiful, btw), it's too big, especially considering that 24 inches is allotted for space between the two pendants (hadn't noticed that dimension until we chatted with the designer).

The designer suggests that we choose something that evokes the dining room chandelier but doesn't compete with it. Wise words, wethinks. She had picked out some glass lights with round features (to counteract the linearity of the kitchen). There was one we especially liked (but I forgot to write it down!) that she was going to check price on (these things can get  out of control fast!).
The designer suggested tiling wall behind the sink from the floor to ceiling (we lean toward a glass subway tile if we do this), but she giddied good when I asked about wallpaper. There are some darn cool modern wallpapers out there, and the papers are making a comeback. I'm partial to this one (which has a foul name): 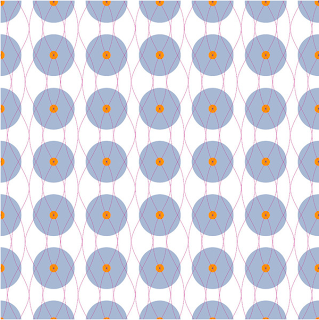 but the designer is going to send over links on some others.

As the bride and I have been hemming and hawing over what we discussed at the meeting, she wondered if the schoolhouse lights we have: would go better in the stairwell and we could put PH5s in the entries. That's a possibility. We may have to put the schoolhousers in after we get a certificate of occupancy (one builder we interviewed earl on expressed concern about putting vintage lights in new constructions). If that's the case, then we can put in the IKEA lights we envision and then upgrade to the schoolhousers later. Also, note that these suckers emit downlight and uplight. Furthermore, because the rear entry to the house has an eight-foot-tall ceiling, I'm not sure one of these babies would fit (in fact, I'm sure it won't). In that case, we need a home for the other one and it would be good if they were either together or used in the same context (such as entries as we were originally hoping). If we do this, we can put a PH5 in the front entry and (ahem) have it all!
Posted by bubba of the bubbles at 9:39 PM