haiku for the book "The Architecture of R.M. Schindler" by the Museum of Contemporary Art 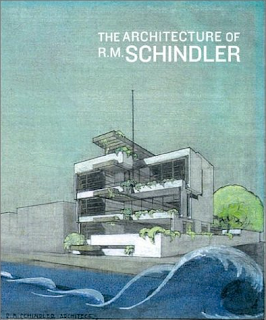 various experts
writing their words on Schindler
what does it all mean?

This hefty 288-page hardcover published in 2001 includes five critical essays and lots of gorgeous images, a number of which hadn't been published before. Given how much I've read on Mr. Schindler, I didn't find much new information on him, but it was interesting to read how today's architectural critics and academics view Schindler, his influences, and his influence at the beginning of the 21st century.

One thing I got out of this book is the need to read more about Otto Wagner. Schindler studied under him in Vienna, and, while most books simply note this fact, this book delves a bit deeper, noting that Wagner promoted the use of technology, form, and continuous experimentation in architecture, something Schindler took to heart. Wagner, in his 1896 book Moderne Architektur, noted the importance of building to meet contemporary needs and local conditions. In fact, it could easily be argued that Schindler fully employed Wagner's conceptual ideas (as well as Loos') in built form before Wagner (and Loos) applied them.

Another interesting aspect of these critical reviews is the thought that Schindler's work in the 1930s was "an aberration" brought on by the partial adoption of the International Style after being excluded from the seminal Museum of Modern Art show on architecture in 1932. I'm no architectural academic, but I question that conclusion. To my uneducated eyes, Schindler's post-32 work simply embodies and develops his pre-32 work. For example, see the Lovell Beach House (1922-26), the Wolfe House (1928), the Park Moderne House (1929), the Elliott House (1930), and the Braxton House (1930). Elements of all that work appear in later projects through the 1930s and until his death in the 1950s. Undoubtedly the International Style had an impact on his work, if only through the wants and desires of his clients. Furthermore, the only way architects are not moved, either positively or negatively, by other people's work if they simply never see or experience it. But Schindler was already mining the architectural veins of his 1930s work before the MoMA show.

If you're looking for an introduction to and history of Schindler's work, this is not the book. But if you simply enjoy photographs or are interested in academic musings, this book is AOK.

I did learn one new fact about Schindler: he supported the use of throw pillows!

Posted with Blogsy
Posted by bubba of the bubbles at 10:10 AM