get with the plans, man (and rule!)

Once the architect finalized our construction plans (this happened right before we went to the bank for a loan and the city for permits) and right before construction started, everybody gets a hard copy of the plans. We asked for three. That's probably overkill (the architect seemed surprised we wanted so many), but we figured we wanted a copy for home (for the cat to sit on) and a copy for each of our cars. That way there's no remembering to bring the plans to the site and, if we see something that looks wonky while we're on site, we have the plans right there. So far this has served us well. 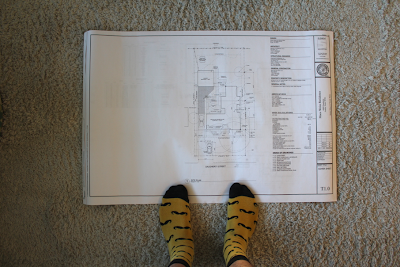 You might be asking yourself: Why not just have them plans digitally? Good question. We've worked with the plans digitally through the entire process up until now, but having a hard copy printed at the proper scale (that is, on the properly sized paper) allows you to much more easily measure length on the plans.

Architects and builders like to work from what I call "scale ratios": x inches on the plan = y feet in the real world. For example:

If you look at the fine print, a quarter of an inch (on the plan) equals one foot (in the real world). If you have this plan digitally, you don't really know what a quarter of an inch looks like on your screen, ipad, or smart phone. If you print the plan, intended for much larger paper (see my feet for scale above), on your 8.5 by 11 inch printer, a quarter of an inch doesn't equal a foot anymore. So you have no clue what the size of anything is (unless you do some ratioing from items of known length, but that's irritating, especially after the cocktail hour). In short, you want a copy of the plans printed on the right paper.

The other thing you want to make your life easier is an engineers ruler: 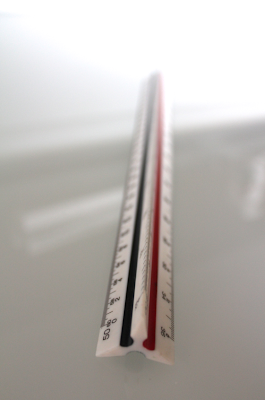 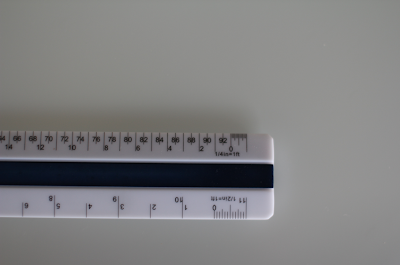 You could use a regular ruler and convert the quarter inches into feet manually, but that's tiring and subject to mathematical error (especially after cocktails). An engineers ruler, also called an architects scale, makes the conversions for you. In other words, if your map has a scale of 1/4" = 1 foot, you find the corresponding scale on the ruler (1/4" = 1 foot) and off you go, measuring feet! These scales are fairly common: I picked mine up at a big box office supply store.

So if you want to get with the plan and rule, you need to get the plans and a ruler. This is the only way you'll measure up.