We finalized the final choices today (all documented here). Going with the jellyfish fixture in the kitchen (thanks to feedback from Devon and the interior decorator). The other difficult light to choose for us was for the bathrooms. We wound up going for the George Kovac Cubism: 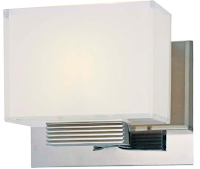 Been going back and forth with the HVAC sub via the builder and have probably succeeded in irritating everyone involved. The first issue--a key issue--was whether or not the Bryant Evolution Extreme has a variable speed compressor. The sub kept insisting that it had a two-stage compressor. I wondered about that and wanted to confirm, including getting a model number (which I could never get). I was concerned that I was missing something or we were getting the wrong unit (or last year's unit). Finally, after hi-liting the manufacturer's literature for the unit and sending it over, the sub acknowledged that, yep, the unit in our order (still no model number...) had a variable speed compressor. Although it took three weeks of back and forth to get that ironed out, this was excellent news.

The current issue is the ERV. We requested the Bryant one (seamless interaction with the Bryant HVAC), but the sub spec'd a Honeywell, which brings up several questions, the main one being: Why? If the Bryant ERV is not recommended by the sub, then that opens up making sure we choose a good one, and since we don't have the model number for the Honeywell (the sub doesn't like to reveal model numbers for some reason...), we can't gage the quality or efficiency of it. The other headscratcher is that the sub included, in the bid, a fresh air damper as well as an ERV. With an ERV, you don't need a fresh air damper, so it's unclear if this was an oversight or the sub doesn't know what an ERV does. There are other, more minor yet important (how many zones?), things missing from the bid.

After sending my follow-on questions to the builder, he suggested a meeting between him, the sub, the manufacturer, and us to discuss the system. The bride laughed out loud at that. I think we're unusual in that we've taken great interest in the HVAC system...

do we need to use a less efficient AC to get a green rating?

The sub reported back that the Manual J analysis of how big of an AC we need ranged from 3 to 3.5 tons. This equates to 650 to 760 square-feet per ton, which gets the house into five-star rating territory. Unfortunately, systems with dual-stage and variable stage compressors only (apparently...) come in 1 ton increments. That means we either round down to have an AC system meet the requirements for rating (and risk having a system that can't cool the house [the bride has vetoed this]) or round up and get excluded. Or put in a less efficient system to hit 3.5 tons. With a variable-speed compressor, the top tonnage doesn't matter: the system will run at the speed it needs to run at. Ironically, to be eligible for a green rating from the city (a rating focused on energy efficiency) we may have to put in a much less efficient system.

The good news is that the builder has built houses with mini-splits (which have variable-speed compressors) where they've had the same problem, and he's been able to talk the city into giving them the stars (horribly ironically, the houses he was building were net zero but could not be rated according to a strict application of the city's rating system because of the "oversized" ACs).

We've decided that we'd rather have the more efficient system than the stars if it comes down to it. Nonetheless, it would be a sad day if it came to that. I plan to visit the city on this issue.

Toyed with doing a Manual J calculation myself but have shelved the idea. The Man J calcs from the sub seem reasonable (apparently HVAC subs are notorious for leaning Man J calcs toward larger systems), if we do indeed get the system with the variable-speed compressor the Man J calcs don't matter, and Man J calcs look hard.

The builder sent in the first request for payment for work up to this point with the completion of the foundation being a major milestone (and there was a major bill associated with that!). He emailed the paperwork to the bank and us and asked us to sign, scan, and resend, which we did in short order. Pretty easy.

The Graff faucets for the master bath arrived, and they are stunningly gorgeous! And they are heavy, weighing in at about 8.8 pounds a piece. They also came with a beautiful drain plug that is push on, push off. Pretty neat. 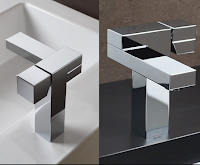 After some delays in figuring out how ship it to us (too big for FedEx; had to go freight) the range will finally be shipped.
Posted by bubba of the bubbles at 10:13 PM