give it all for the media wall!

With the framing imminent, we have to give some feedback on the media wall, the wall in the living room that will hold the television and the in-wall speakers. We want to make sure that (1) there isn't a two by six right where we need to place a speaker so everything is centered and (2) there are two by sixes where we need to hang the telly. To help things along here, I put together this diagram: 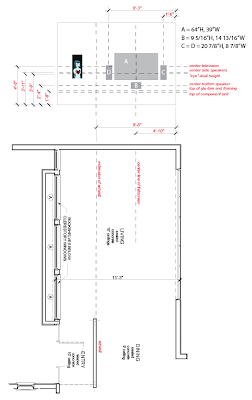 A close-up of the wall with some furniture (click to make bigger): 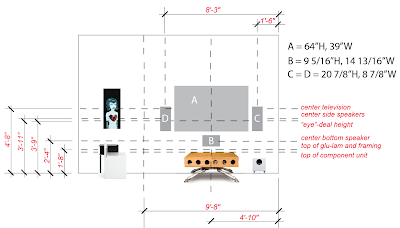 Although we are excited as an orbit-hopping electron about that cantilevered wall out the front of the house, the 18-inch glu-lam beam has an unfortunate side effect: the plugs will be above the top of the component unit (the piece of furniture that will hold the components). That means we'll have to conjure up some way to hide those plugs (probably a bottomless and backless box attached to the wall).

An alternative may be to simply add a two by four wall to the inside of the two by six wall. This would allow us to lower the plugs, ensure there's enough room in the wall for the in-wall speakers (and not compromise the insulation in the two by six outer wall [those speakers require four inches of depth]), allow us to shadow box the television (in other words, it would be hung in the same plane as the two by six wall), and "define" the wall space art will hang to the left of all that media stuff.

In other words, this: 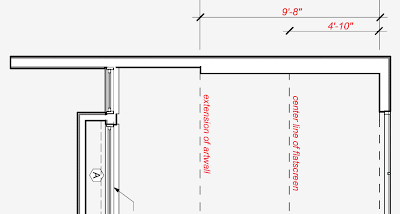 The downside is that this balkanizes the wall, and it's not as elegant. Nonetheless, this is prolly the way to go. We'll have to ask the architect and builder...
Posted by bubba of the bubbles at 1:25 PM