is Austin out of the drought?

The local newspaper, the Austin-American Statesman, has been publishing a series on water issues and the drought. It's a good series, but they've used a phrase several times that causes the hair to raise on the back of my neck:  "In Austin, the severest drought in a generation broke in the early spring...".

Now to be fair, that's a statement that is accurate yet misleading at the same time. [cue Paul Harvey:] "And now for the rest of the story..."

Drought is a complicated beast. There are different flavors of drought: hydrologic drought (not a lot a rain where you are at), agricultural drought (the rain didn't come when you,  Mr. or Ms. Farmer, needed it, where you needed it), and supply drought (the rain didn't come to the area that feeds your water supply)(there are other droughts, but we'll just yap and yarp about these three). When the Statesman refers to the drought breaking in Austin, it's referring to the hydrologic drought in Austin proper, that is, the rainfall here in the city. But our supply drought is not over. Not even close.

Austin's water supply comes from the Highland Lakes to the west. It doesn't matter how much it rains in Austin proper, it's not going to help our water supply. It needs to rain 30 to 100 miles to the west to really help us out.

Yes, the rainfall in Austin has been pretty good this year (especially compared to last year), but let's take a look at the lake level in Lake Travis: 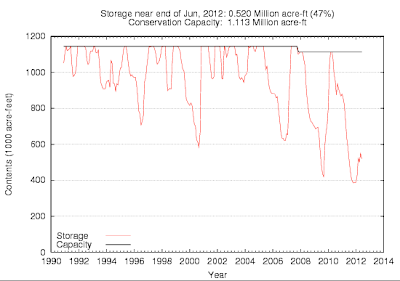 Can you say "Yuck"? Yes, we've had a (wee) bit of a rebound over the winter and spring, but we're still aways down from good times. Our reservoir is less than half full!

Lake Buchanan is also part of our water supply. Let's check it, shall we? 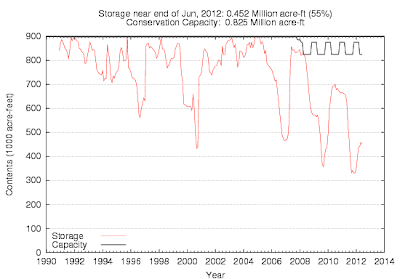 Yeech! That's not looking so good either! 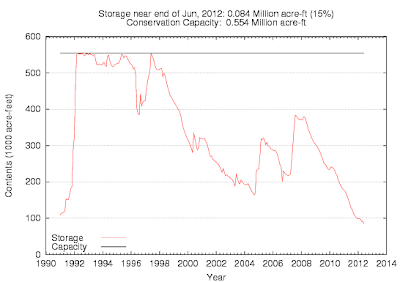 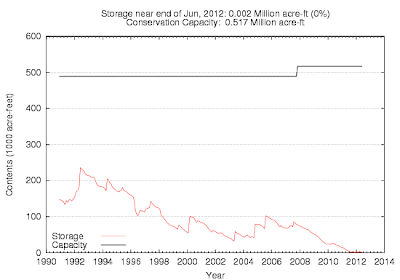 So remember to note where your water comes from and what's going on with it. It may be raining on you, but it may not be raining for you...
Posted by bubba of the bubbles at 7:40 PM