We've written about rainwater harvesting before (here and here), but we haven't really sized tanks for the house yet. So here we are! We are planning on having two tanks: One fed by the garage and one fed by the house. The architects are hot for one for the house (which warms my heart...) because of the ample roof area, but the roof design is not exactly amenable to a cost-effective "dry" system.

In a dry system, the water falls from the roof/gutter into the tank: 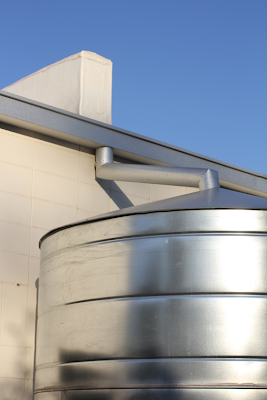 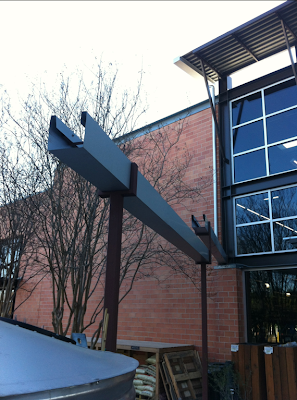 These are called "dry" because once the rain stops, the conveyance to the tank is dry (if you've done it right!). In the tippy-toppy photo, the gutter runs straight into the tank. In the botty toppy photo, the downspout empties into a series of troughs that then waterfall into the tank (just like the drool dripping from our chins when we first saw this gorgeous system...).

In a wet system, the gutters empty into a series of pipes that are typically partially underground (deep enough to not freeze) and then come out of the ground and up into the tank. These are "wet" because when the rain stops, much of the piping remains full of water. Some wet systems are designed to slowly drain once the rain stops, but you have to have enough topography to allow this to happen.

Dry systems are easier to build and (perhaps) maintain and therefore more cost effective. Wet systems are a bit more complicated (the piping has to be water tight, there's a lot of digging involved [right, Devon?]) and therefore more expensive. But if your roof isn't close to your tank or you have to collect water from several roofs, this may be the way to go.

To figure out an appropriately sized tank for our roofs, we used the Texas Water Development Board's rainwater spreadsheet. The spreadsheet is specific to Texas, but if you know your monthly average precipitation, you can jimmy it to your conditions wherever you live.

For the garage, the roof area is about 480 square-feet. This will allow us to collect about 10,000 gallons in total over a normal year. I copied and pasted the spreadsheet in a new spreadsheet in to order to (1) circumvent the write protection and (2) carry the end-of-year volume back into the first month of the year; a better way, methinks, of assessing volumes once the tank is in full year-to-year use (to do this, you need to change the equation to carry the volume from December into January and then tweak Excel settings to allow circular references). With this, in an average year, we can use about 9,850 gallons a year without ever running out of water (the tank gets down to 1 gallon left!). Under these conditions, the volume of water in the tank tops out at 4,100 gallons. This suggests that a 5,000-gallon tank is the way to go (they don't make a 4,100-gallon tank!). 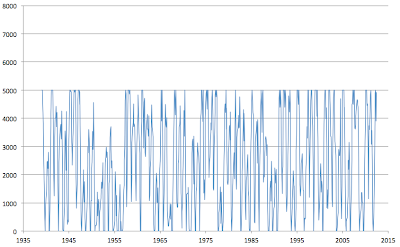 If we keep demands the same but add another tank off the house, we can dramatically decrease the dry days. If we add a 3,000 gallon tank off the 210 square-foot roof over the master bedroom (something we could do with a dry system), we reduce the number of tank-empty months to 0.3 percent and years with a dry month to only 2 (1956 for 3 months and 2009 for 1 month). Not bad, not bad. And the system would be completely full 30 percent of the time. Given this, it appears an 8,000 gallon system with a 5,000 gallon tank off of the garage and a 3,000 gallon tank off of the master bedroom would fit the bill with the added bonus that both tanks can be fed with dry plumbing. Sweet! 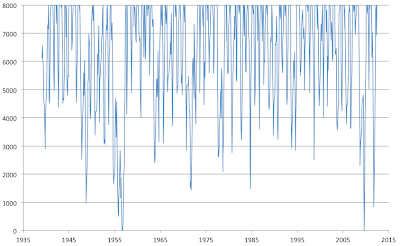 same plot but with an added 3,000-gallon tank fed by another roof

Whilst sipping wine last Thursday out Fredericksburg way, we saw "our" tank back behind Four Point O Cellars: 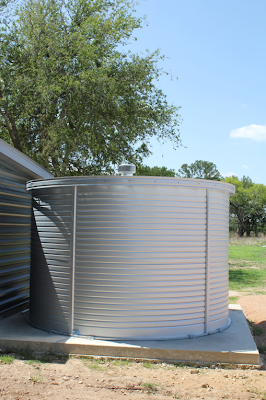 It's BIG! It's made by BluScope, a company out of Australia. The Australians have had to become great at water conservation because of a nasty 10-year drought and as a result have become world leaders in rainwater harvesting. This particular tank, at 5,000 gallons, measures 11 feet in diameter and 7 feet 3 inches tall. The 3,000 gallon tank is 8 feet 10 inches in diameter and 7 feet 3 inches tall. Eleven feet doesn't sound too big until you see it, and it's BIG! We're talking half the length of the garage BIG!

The landscape architect's plan doesn't capture the full size of this sucker, in part because he split the tank into two tanks off the back of the garage (a subtle suggestion?): 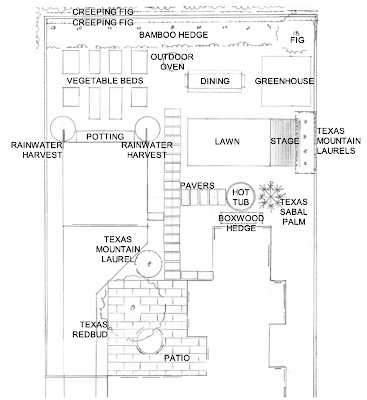 But with the roof oriented toward the south for solar, one tank makes better sense, so here she is in her full glory off the backcorner of the garage: 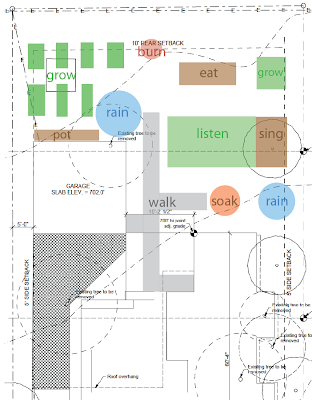 Can't wait until it starts raining again!
Posted by bubba of the bubbles at 1:21 PM