the rent is too damn high!

Got notice last week that we have to decide now (two months before our current lease is up) whether or not to renew and for how long. Oh, and btw: your rent is going up 20 percent. hmmm...

Decision #1: To move or not to move? We entertained moving closer to the lot/future construction site. We'd be closer to the lot and would be able to get a lower rent. But we'd have to move (which is a huge pain) and move into a lower-rent property (both literally and figuratively). Timing wise, the build is going to occur during the worst possible time for me: During the legislative session. Despite all my attempts to avoid this, this is where we are (thank you Architect 1.0...). Living downtown works better for that and we were going to live downtown during the build anyway, so... We're going to stay!

Decision #2: How long of a lease should we sign? The loose ends (finalizing the budget, financing) are taking longer than we thought, so it's a wee bit of a crap shoot when the house will be done. The builder estimates a seven-month build plus a one-month punch out. So let's round that up to nine months and plan on construction not starting for another two months, which puts us with a nine-month lease starting in September.

There are several large ticket items that remain unbidded: the driveway, the front walls, and the sound wall.

The builder has an allowance in the budget for 1,500 square-feet of concrete drive at $5,250. This number appears to be for the totality of the drive, including the bit in the back noted as Grasscrete (green in the diagram below). The part of the site plan marked as concrete (gray in the diagram below) is about 700 square feet. It's still unclear to me whether or not the sidewalk approach to the house is in the bid (shown in blue below).

A continuing source of confusion at this point is how the landscaping fits into the project and impacts the hardscape. The architects included some of the hardscape (driveway, sidewalk approach to the house, Mies wall), but the builder was expecting something from the landscape architect; however, the landscape architect honored the driveway/sidewalk hardscape features (which didn't surprise me), and his plans are not as detailed as the architects' plans (not even close). After a few emails and a face-to-face with the builder, I think we finally got it all cleared up (I think...).

The builder says that Grasscrete will cost $12.50 a square foot to install. That's considerably higher than the $3.50 a square foot for straight-up concrete and considerably higher than the 30 percent premium the manufacturer suggests. Earlier discussions with the builder (a year ago) suggested it cost about 50 percent more. But with those numbers, try 357 percent more. Whoops. There's about 500 square feet of Grasscrete on the plans. With concrete, that runs at $1,750. For Grasscrete, try $6,250, a $4,500 premium. Something tells me we ain't putting in grasscrete after all... I've sent a note to the local Grasscrete dealer to confirm installation costs. Something doesn't seem right here...

Not shown on the figure but accounted for in the budget is the sidewalk in the right of way. The city will require us to either install a sidewalk in front of our house at a cost of $1,050 or pay about twice that to not put a sidewalk in. This requirement is kinda massively goofy: There are no sidewalks on our side of the street. And what's the logic for charging more for not putting one in? Bottom line: We're not going to pay for the luxury of not having a sidewalk. If the city wants a sidewalk, by Lenin, we'll give 'em one (but hopefully not with Turkish rebar; friends of ours had to tear out their "city" sidewalk when the inspector noticed the rebar they used was Turkish. Build America applies to private funds building stuff on public property?!?!?!!?).

The footing for the Mies wall (the wall in front of the entryway) appears to be included in the budget ($890), and the builder says that it will be an additional $1,710 to finish the wall out (assuming I understand his number; which I don't completely [I can't tell if his number includes the footing or not... Sigh.]). If we want to add the other two front walls out front, we're looking at adding another $3,500. A later addition, perhaps?

We still don't have an estimate of what it would cost to build the back wall. Early discussion with the builder suggested $10 a square foot of surface area, which amounted to $7,000, but the front wall is coming in much (much) higher than that (albeit stucco'd), so I've got a bad feeling about that wall back there... We won't be able to go to the bank until we know what it will cost to build that wall. As the bride says, "We have to have that wall!"

no allowances allowed (except when they are...)

We've not met our goal of figuring out all of the allowances before getting a loan, but we made a good run at it. At this point, it's not worth holding up the loan and work to get the last items fully spec'd and bidded. Lacking at this point:
Window D, aka "The Mondrian Window"

One of the action items for the builder was pricing out Gerkin storefront windows for the entire house to see if they were comparable in cost to Milgard. It was an interesting result. In short, Gerkin was about $4,400 more expensive than Milgard. However, the subcontractor Gerked the large Mondrian window (aka Window D [as it is indicated on the plans] shown below) out the rear of the living room and it came in $3,400 less than the other sub using some other source of storefront. 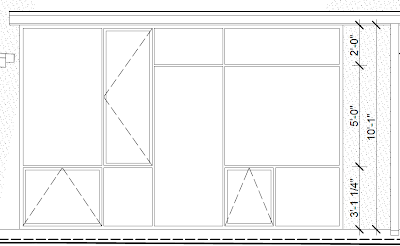 The only problem is that Gerkin has size limitations that won't allow the above configuration. Instead, the sub priced out this approximation: 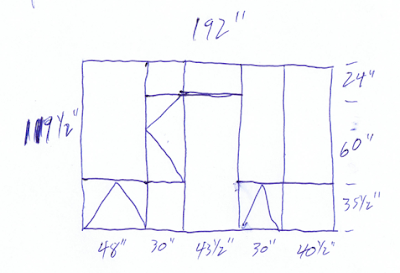 A valiant attempt, for sure, but not nearly as artful as what the architects first came up with. The Gerkins can't be wider than 48 inches, and casements (windows that open) can't be higher than 60 inches. We've asked the architects to redesign Window D to accommodate Gerkin's limitations. Their original design is simply perfect, so we'll see if they can come up with something better!

If we want storefront all about the house, we can have it for $1,000 more. Architect 2D, keeping an ever-watchful eye on budget, notes the Gerkin plus Milgard results in an overall savings of about $3,400 (although it would be a wee bit less than that because it would be cool to use storefront at the front of the living room). The bride loves the storefront, so I'll let you guess where this is heading...
Posted by bubba of the bubbles at 10:01 PM