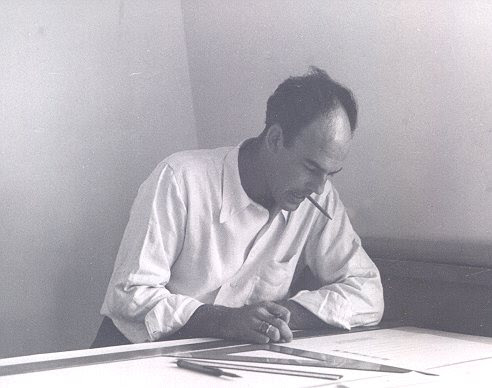 yo yo googie man!
beautify this ugly town
one house at a time!


I'm totally diggin' these old UCLA interviews with SoCal architects. They're quite lengthy (6 to 10 hours of interviews transcribed), but you can get a real feel for the person from these things.

Lautner comes across as a real likable character in his interview. He's like the Jack Kerouac of architecture, a beatnik of the boards (drafting and building wise). Common themes in the four interviews I've read so far, including Lautner's, are (1) architects are misunderstood, (2) editors really don't understand architects, (3) the world doesn't appreciate architecture, (4) architecture is a hard way to make a living, (5) builders are too conservative, (6) "I ain't International Style!", and (7) photographers always choose the wrong photos (the bastards!).

Lautner is a Frank Lloyd Wright disciple, and one that Frank didn't disown (perhaps Frank mellowed out in his old age?). Lautner read Frank Lloyd Wright’s autobiography in 1933 and went to Taliesin to become an architect. Not everyone “got” Taliesin. He said it wasn’t real obvious to some what you were learning, but it was immersion into living and noticing and doing. He said Taliesen only had one rule: If you didn’t get up by seven, you didn’t get any breakfast. And given the hard labor involved, you really (really) didn't want to miss breakfast. The had labor (farming, stone work, building) seems to have been a screening Frank did to ween out the weak. Once you proved your mettle, you spent more and more time learning design. Creepily, once you were at Taliesin, Wright didn’t want you to leave for any reason, including visiting family (David Koresh, anyone?).

While working for Wright, Lautner oversaw the Roberts House and the Johnson House (Wingspread) and then moved to Los Angeles to oversee the Sturgis House and Obeler House (both somewhat problematic). In 1939, after accruing wife and child, Lautner started his own practice, building his own house in Silver Lake, that mecca of Modern, in 1939 as a calling card. Esther McCoy later described the house as “a marriage between Walden Pond and Douglas Aircraft", a description Lautner appreciated.

Lautner wasn’t a big fan of Richard Neutra, saying that “...all he did was one thing, and he kept repeating that same thing.” But Lautner seemed to respect Schindler: “Schindler was more experimental and created more interesting spaces and tried different materials. Neutra just did the same thing over and over and over.”

Lautner met Schindler: “I talked to Schindler one time in his later years. He did all of his own building, and I don't blame him because you couldn't find a contractor, then or now, who wants to do anything different or at a reasonable price. And so Schindler really tried to provide an interesting space at a reasonable price. So even though he was interested in concrete and so forth, and did his own pre-cast concrete, most of the later things were just regular studs and plaster: the cheapest, fastest way you could do it. I couldn't blame him either, because he did give the client a space that didn't cost too much, and he did some experimenting with the space as well. He liked what I did, what little he knew before he died.”

Lautner is often accused of not having a style, but he took Wright’s thought that every man deserves a home of his own to heart, and truly strove to achieve it. By my architecturally uneducated eyes, it appears to me he did have a style. His houses often curved to take advantage of the frequent panoramic views offered by hillside or oceanside L.A. lots. This curvature tended to give his houses a futuristic look associated with Googie architecture, a term coined by Douglass Haskell of “House and Home” magazine for spacey-looking buildings after he saw Googies, an L.A. coffee shop designed by (guess who?) Lautner in 1948. 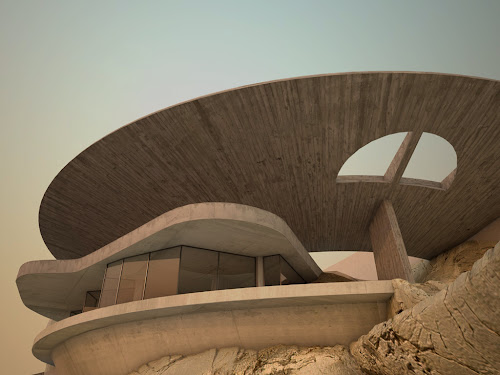 Lautner abhorred L.A., saying the town made him physically sick when he first saw it. “I have never accepted Los Angeles.” Ironically, despite being the center of early modern architecture in the U.S., Lautner felt that no one in L.A. appreciated architecture: “...after I had got to Los Angeles, I discovered that shelter doesn't mean a damn thing. Food's the only thing that matters.” and “...to me almost everything in Southern California is a farce.” As a friend of ours who lives in L.A. noted, a big part of living in L.A. is figuring out how to get out of L.A. Some never figure it out...

Nonetheless, Lautner made a career of it in L.A., knowing that a few out of a million would want him to design their house, and L.A. had millions. And although his style is not my cup of tea, he designed some inspiring, and different, houses (and invented the negative edge pool!). And it warms my heart that he raised money to help save Watts Towers. Reading the interview, I got the sense that Lautner, despite the spacey architecture, was pretty down-to-Earth and would be fun to share a pitcher of beer with.

As one of his clients said to him: "You know how to stay on the ground and fly." 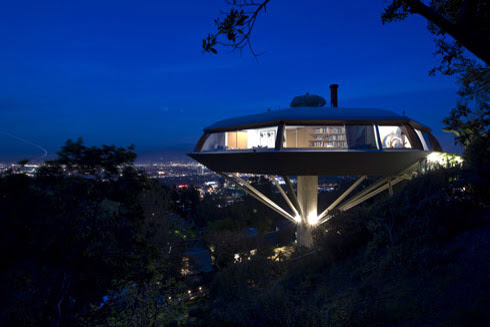 Posted with Blogsy
Posted by bubba of the bubbles at 8:10 PM