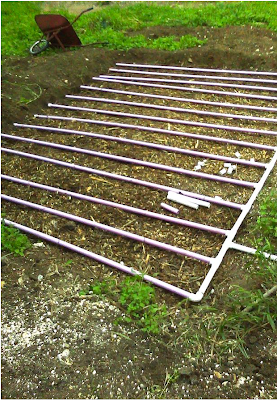 Nifty article in todays' newspaper about household greywater use, which is the on-site use of water from showers, bathtubs, washing machines, and sinks (although I've heard folks say that washing machine water is considered blackwater [like toilet water] because of the possibility of washing cloth diapers [and the occasion shart residue...]). We briefly considered using greywater at our new house, but the local codes are fierce and a real disincentive (only one permit has been given to do this in Austin). After hearing Rebecca Batchelder (she has that permit) speak at a function last fall about her efforts and the list of concerns, I completely marked grey off the list.

Greywater is "special" in that it tends to have higher salt content, so you have to worry about salt buildup when you use it for irrigation. And there are other nutrients to be concerned about as well. Let's say, hypothetically, you went to the zoo and a monkey named Nolan Ryan threw poop at you. When you go home to shower, all that poop you shower off (as well as the associated pathogens and [possible] residual steroids) goes into your greywater system. Yuck. This is why I don't go to the zoo (or baseball games)...

There are statements in the article about water being wasted if it's allowed to go down the drain, a pet peeve of mine (the statement bit, not the drain bit). Water that goes into the sewer is treated and may show up in the parks downtown (if you see purple pipes and hardware, that's treated wastewater [don't drink from that bubbler!]). And some of it goes back into the river ("return flows"), supplementing environmental flows and perhaps providing water supplies downstream (40 percent of Houston's water supply from the Trinity River is from return flows from Dallas and Fort Worth). In short, water that goes down the drain is not wasted. I suppose you could make a lifecycle argument about why it's better to treat greywater onsite rather than in a centrally located plant, but that water ain't wasted. As they say in Dallas: "Flush twice: Houston needs the water!"

The article mentions "pricey devices". They're talking about a backflow preventer, sometimes referred to as an RPZ (reverse pressure zone). One of these suckers costs $500 700 or so to buy and install and $50 to $100 to inspect annually. An RPZ keeps water from your side of the water line from moving into the city's system if the city's system loses pressure. An RPZ is also required for pressurized rainwater harvesting systems.

The RPZ requirement drives rainwater and greywater harvesters nuts. Even if your rainwater or greywater system is completely separate from the city supply, the city wants an RPZ at your house. As a gravelly voiced rainwater radical once told me (I call him the "Godfather of Texas Rainwater Collection"), swimming pools are a greater threat to water supply than rainwater tanks based on how many pools he sees with a hose plopped in 'em (during a pressure loss in the city system, it could suck that pool water into the distribution lines;  I sure hope Timmy didn't pee in the pool!).

Speaking of RPZs, here's one I saw Saturday in South Austin: 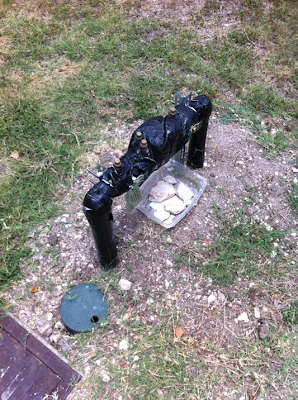 Purdy! If you see one of these babies in someone's front yard, there's a pressurized rainwater system (and grumpy rainwater harvester) nearby!