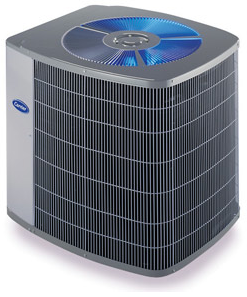 Since we're hot off the heels of insulation, let's talk HVAC (short for heating, ventilation, and air conditioning). In hot and humid Austin, Tejas, we are a cooling climate, which means we spend much of our artificially-adjusting-the-inside-temperture time cooling our houses rather than heating them. Therefore, our biggest energy sink (assuming we don't use electric heat [which we won't]) is AC.

AC's are energy rated by their SEER: The seasonal energy efficiency ratio. The SEER is the ratio between the cooling output in BTUs (British thermal units) during a typical cooling season divided by the amount of electricity used to generate that cooling during that season in watt-hours. So the units of SEER are BTUs per watt-hour. The larger the SEER, the more efficient the AC. ACs in the United States have to have a SEER of at least 13. Energy Star rated ACs have a SEER of at least 14.5 (not much of a difference there, my friends...).

Our house is currently spec'd (by the builder) for a 16-SEER unit, 21 percent more efficient than the national standard. Our old house had a Carrier, and we were pretty happy with that (although shame-on-me I don't remember the SEER of that sucker). Given our past luck with Carrier, we're thinking Carrier for the new place as well. Carrier has an "Infinity Series" with two-stage compressors (the compressor can run at two different speeds instead of just one) that reach as high as 21 SEER (62 percent higher than the national standard; our old house had an Infinity in it, but an older, less SEERy one). Single stage compressors only get as high as 17 SEER. Ductless split systems can get up to 23 SEER (but then you have to have a ductless split system, not that there's anything  wrong with that, but methinks that has to be considered up front in the design of the house...). Carrier also has a variable speed compressor that reaches a SEER of 20.5 (interesting that it's lower than the dual-stage compressor, although it appears the big benefit is on the heating side of the equation, not the cooling side).

Gas furnaces are rated by their AFUE: annual fuel utilization efficiency. The AFUE tells you what percent of the fuel is being burned and used for heat. For example, a furnace with an AFUE of 90% means that 90 percent of the fuel is being used to provide heat for your home. Carrier has a variable speed heater with a 98.5% AFUE. Other furnaces they sell have AFUEs ranging from 80 to 96 percent.

So we'll prolly get a dual-stage Carrier of some flavor of Infinity. The house is currently spec'd at a 3 ton with the final tonnage to be determined with a Manual J calculation by the architect. Wethinks it needs at least three zones: upstairs, master, rest of downstairs. According to this site, the  20 SEER unit runs about $1,000 more than a 16 SEER unit.

Carrier has some cool thermostats. Check out this one called "The Edge": 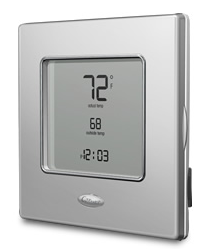 However, it can only handle a single zone system (boo!!!). That means we'd have to go with their standard Infinity Control: 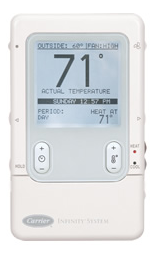 Not as purdy, but it'll do, I reckon.

Then there's the controller by Nest: 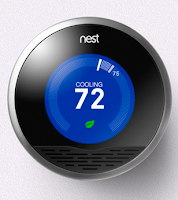 Which is purdier than purdy! Designed by a dude who used to work with Apple, it DOES work with multi zones! But it's on the 'spensive side: $250 (no idea how that compares with the Carrier controllers...).

Ventilation doesn't get talked about a lot with HVAC systems, primarily because many systems are really HAC systems (in more ways than one...). However, we'll yap about that another day...
Posted by bubba of the bubbles at 9:22 PM